How Jordan Firstman + His ‘Impressions’ Became the Breakout Hit of Quarantine 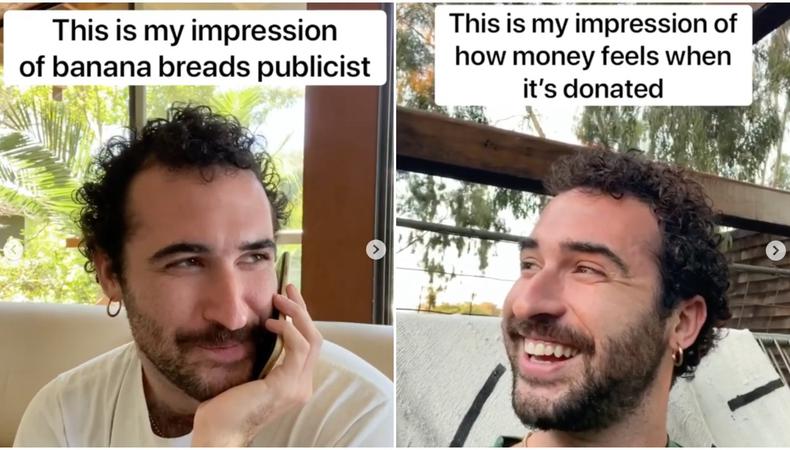 Banana bread has been the uncontested star of quarantine. But close on its heels is Jordan Firstman, whose impressions videos on Instagram and TikTok—among them that of “banana bread’s publicist”—have captured the zeitgeist among those of us who are extremely online, but also those who aren’t. Celebrity fans include Jennifer Aniston and Elisabeth Moss. Firstman, who’s long written for series including “Search Party” and “The Other Two,” as well as short films (his “Call Your Father” was recently added to the Criterion Channel), hopped on the phone to chat everything impressions and following your creative instincts—even when they won’t follow you back.

How did the idea for the “impressions” videos first come about?
I was in a different phase of social media. I had just gotten out of a breakup and I was kind of being a hoe on there, kinda hoe with funny caption vibes. It was kinda working, there were cute boys reaching out, and I was like, “This is a tangible reward for the work.” I ended up watching a celebrity’s Instagram Live and made an observation to myself, and that’s where the first one came from: “This is my impression of a celebrity on Instagram Live.” I posted that to my stories, and was like, “Oh, this will be a fun creative experiment, if I do one of these every day for a week.” I did them really spontaneously. When I had the idea, I would whip out my phone and do it. Sometimes I would do it in one take, sometimes the idea would keep formulating throughout the take and I’d do eight or nine [takes]. They definitely had varying degrees of success on my stories. Not everyone was completely gagged. I posted them all, “the first season,” if you will, to my main feed. It just did really well. I was like, “OK, I think I want to keep doing this.” And then every round kept evolving, and I think the work kept getting better. It found its audience. Then the celebs came, and the rest is kinda history.

Do you write out a “script” beforehand or is it mostly improvised?
Both. I did one of someone who doesn’t wear a mask, and I think one of the most profound lines in all of the impressions was at the end of that one, when it’s like, “If another person matters, that means that I might matter.” That was improvised. I really like when I can just find it, but then sometimes I’ll be in the shower, in my car, and the dialogue will come to me and I’ll write it down and save it for later. I prefer when they come naturally. One of my favorites is the actress who’s justifying doing an animated film. That one I literally woke up from my sleep and did that. I had that idea, I guess, in a dream and I woke up and did it in the middle of the night.

Is writing the impressions at all like writing scripts for film and TV?
I think things I’ve learned in writing [for film and TV] are just intuitively in me now and therefore in the impressions. A lot of them have a three-act structure. Someone on TikTok did an impression of my impressions. She said something about how you’re not exactly sure where it’s going but you just have faith and it pays off at the end, and maybe you get lost somewhere in the middle but you always end up there. Part of the fun of it is that it is kind of like a ride and you’re like, “Wait, is this gonna work? Oh, it kind of works! Oh, this really works!” Maybe not all of them really work, but hopefully, most do.

Have you found that making the impressions videos has informed your longer-form filmmaking?
I think what has informed my not-for-Instagram writing is discovering that I can talk about anything. I think inanimate objects was a huge revelation for me because I was like, “Oh, right, everything could have a story.” There’s stuff to mine in every place you go and every person you meet if you just look for it. Since I’ve been doing the impressions, life has almost become this scavenger hunt of, “What can I look at and then make into an idea?” Because everything started as an idea. It’s opened my mind up to new ways of thinking and the things I want to tell stories about.

Did you have a strategy for engagement or was it all organic?
The only strategic thing I ever tried to do didn’t work. I really wanted SZA to follow me. I did the impression of a musician asking for her grandma to say something wise on the album, which is totally for SZA (and a little bit Frank Ocean) but she didn’t follow. I was like, “I need to go off of what I think is funny, I can’t try to target people ever again.” I challenged myself and I think my audience because honestly after “banana bread’s publicist,” it felt like that’s what people wanted from me. My last round is actually super existential and a little bit heavier than my other rounds, and it did the best out of anything I’ve ever posted. I think it’s a good lesson for me to just follow where I’m at, that’s the headspace. If you watch week-to-week, in the beginning, the reception was a little overwhelming. I think you can tell the week that I was being affected by it. There are weeks where you’re like, “Oh, you’re going through something and putting that into this.” That’s what I hope to do with all of my work and I’m glad I can do it in this silly, fun way. I’m still expressing my points of view about the world and the way I’m experiencing the world and it can be done in a palatable, fun, joyful way.

READ: What Social Media Does an Actor Need?

You’ve been writing your own content since long before the impressions videos. Why has that been an imperative for you?
Not to sound like a dick, but I feel like an artist and I have to express myself. Of course, you want a career, you want the things that you’re supposed to want. But ultimately, the thing that has guided me through my work is, “What do I actually need to say right now or I’ll die?” It’s been nice to achieve professional success to some degree by doing short films. I worked with this amazing writer, Richard LaGravenese, who’s an executive producer on a show that I was developing for a while. He said, “Never chase the money. Always chase the art, and the money will come.” I’ve really found that to be true. I wouldn’t have done impressions if I was chasing the money or professional gain.

What advice would you offer someone who wants to create their own stuff but doesn’t know how to start?
Do it. Get over it. Put bad stuff out when you don’t have people watching. It gets a lot harder to put bad stuff out when people are watching. Use your lack of platform and lack of success to find your voice and find what you want to say and make mistakes. Make bad things—because they’re not bad, there’s no such thing as bad art, it’s just art that doesn’t live up to its full potential. And you get there by doing it. There’s no amount of books you can read. It’s really just about experience and throwing yourself into it and making it work and not being afraid to ask for things and ask people for money to do your things, even if it’s just a little bit.

Casey Mink
Casey Mink is the senior staff writer at Backstage. When she's not writing about television, film, or theater, she is definitely somewhere watching it.
END_OF_DOCUMENT_TOKEN_TO_BE_REPLACED