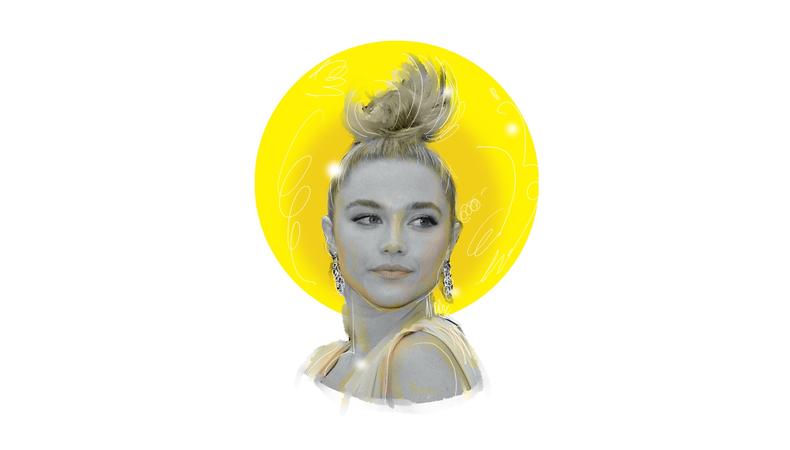 After a number of eye-grabbing roles in William Oldroyd’s 2016 indie drama “Lady Macbeth,” in David Mackenzie’s 2018 Netflix feature “Outlaw King,” and on AMC’s miniseries “The Little Drummer Girl” with Michael Shannon and Alexander Skarsgård, 23-year-old Florence Pugh continues her upward trajectory as the spellbinding lead of Ari Aster’s “Midsommar.” As Dani, a grief-stricken woman in an unfulfilling relationship who falls into a pagan cult, Pugh draws on the wisdom she’s accrued throughout her still-blossoming career. In addition to her buzzy horror flick from the filmmaker behind “Hereditary,” audiences can catch Pugh next in Greta Gerwig’s “Little Women” remake later this year.

How did you get your Equity card?
My first-ever job. I did this little audition tape that nothing was ever supposed to come from. There was this film called “The Falling” auditioning girls between Oxford and London because they needed to fill a school’s-worth of girls. I ended up getting one of the supporting roles, which was such a fluke at the time. That was essentially my first job, and I got Equity after that.

What’s the craziest thing you’ve done to get a job?
I remember once I went into an audition and I sat down to read my lines and they had completely different scenes; I had [been given] a completely different set of pages. They were like, “We’ll print it off and you can send in a tape or read it off here.” I remember being so adamant that I wanted to be off book that I sat on the stairs and waited until the end of the day so I could go in and do it again. That was pretty psychotic of me. I didn’t make the job, but I certainly made a good impression.

What’s your worst audition horror story?
There’s always horror stories—probably because your adrenaline is through the roof. You’re so nervous! You’ve got sweaty hands, your face is sweating, you’re just hot. You’ve had too many coffees and anything can throw you off. I remember once, when I was 18, by the time I got to the audition, I’d had five double-shots of coffee throughout the morning. I was shaking and I sat down to do the audition and in the middle of this emotional monologue, someone’s phone went off. Instead of them saying, “Oh gosh, I’m so sorry, I’ll put this away,” they then picked up the phone and answered the call while leaving the room and I was like, “Oh my goodness how am I going to recover from this? I’ve got far too much caffeine in my system and now I’m heartbroken!” Everything is dreadful when you’ve had too many coffees and you're so anxious.

How do you typically prepare for an audition?
I really hate this, but I will only absorb lines when it’s getting too close for comfort. Even if I had a week to prepare, I will only actually start learning when I’m starting to feel the heat, like the day before. It doesn’t matter how many times I’ve tried to do it otherwise. It’s a dreadful trait of mine. I make myself feel complete anxiety throughout the entire process. Now I’m a bit more savvy; I don’t have any caffeine in the morning. It’s too much, I’m too panicky.

The more you [audition], the more you realize it’s not the end of the world. If you can impress someone, it doesn’t need to be for that project. As long as you’re impressing them in the way that you work and the way that you perform, then ultimately something will come around, either from them or someone they've spoken to. For a long time, I would get really depressed about the fact that I didn’t get that role, or I didn’t hear anything back from that project. But most of the time, if you do a good job it’s going to come back around and meet you somewhere else. And that was a nice thing to realize: It will matter if you’ve done a good job.

It’s OK to not be right for a role. If they're in a position where they can choose roles, I think that’s part of an actor’s position, to realize when it’s not for you and when someone can do a better job than you. I think that's a really important thing. When you don’t have to do it because it there, it's just as important to make sure that role goes to the right person.

What performance should every actor see and why?
The one I am always telling people to watch is “Blue Valentine.” I just think everything about both of those performances [Ryan Gosling and Michelle Williams] is so subtle and beautiful. And also cinematically, the lighting is incredible in that, it’s so bizarre.

What advice would you give your younger self?
For me, my biggest thing, especially when I first started out, I was always having a constant battle of whether I should alter things for a role. Not even appearances—I’m talking about me or my opinions or conversations with certain people. I think that’s one of the biggest sacrifices you could do to yourself, and the biggest pain you can cause yourself: change who you were at the beginning, because ultimately that’s the most important [thing]. My advice to myself is keep being a dork as opposed to altering for specific people.