Pedro Almodóvar has been asked if he’s OK a lot lately.

To be fair, he did make a film about a successful Spanish director who’s in so much physical and emotional pain he starts doing heroin and isolating himself to the point of misanthropy. And then he told everyone that the film was based on his own experience.

“I’ll assure you, I’m not as bad as in the movie,” Almodóvar clarifies about his latest feature, “Dolor y gloria” (“Pain and Glory”). “I have the feeling now that people love me more than before. And they think that they have to express that feeling toward me, which is wonderful, but they think I’m much worse off than I am.” 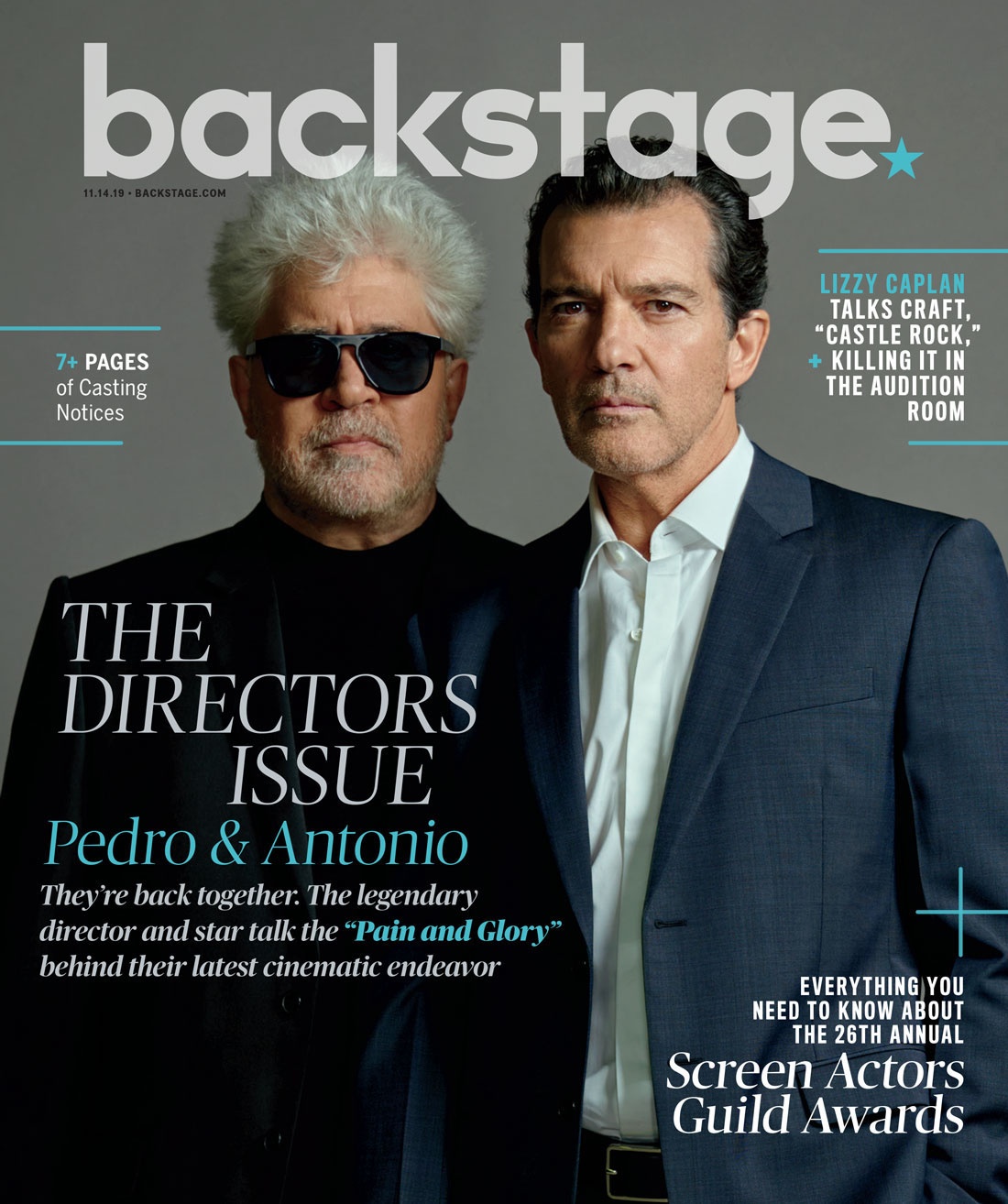 It doesn’t appear that Almodóvar will be taking up hard drug use at age 70, but the film’s other subplots are indeed intimate and thematically familiar to fans of Almodóvar’s canon. “Pain and Glory” feels both like a crystal-clear distillation of the themes the writer-director has touched on for years in everything from “Volver” to “La ley del deseo” (“Law of Desire”), as well as topics he’s referenced in his own life: the pursuit of great filmmaking on- and offscreen, the relationship between parent and child, explorations of female suffering, and, of course, the force of male lust and exoticism.

That he tapped on-again, off-again muse Antonio Banderas to play his onscreen alter ego, Salvador Mallo, is a delicious kicker and a leap of faith that’s paid dividends. The filmmaker landed his sixth Palme d’Or nomination at Cannes for the film, while Banderas picked up a win for best actor, resulting in buzz that’s continued into this awards season. Particularly for Banderas, who has become more selective in his work after suffering a heart attack in 2017, having the award follow last year’s Emmy nomination for playing Pablo Picasso on “Genius” feels like a second victory lap. But a role like Salvador—and in an Almodóvar film, of all things—wasn’t initially on his radar.

“It was very surprising, actually, when I got that first call from Pedro,” says Banderas, sitting opposite his director and a translator in a Manhattan hotel suite on a bright day in September. “He said to me, ‘I’m going to send you something that you will find very familiar: situations and people.’ I didn’t know he was talking about himself.”

Banderas was admittedly apprehensive to take the part. Their reunion for 2011’s “La piel que habito” (“The Skin I Live In”), though ultimately successful, was reportedly a rocky one, with Banderas bringing his years of technical acting experience to a role for which Almodóvar sought a more emotional performance than an intellectual one. Not having the elasticity of a fictional character was also a consideration, and though Banderas had played real people before (Ché Guevara, Pancho Villa, the aforementioned Picasso), it had never been the case that the living inspiration for his performance was also directing him.

READ: Penélope Cruz Has the Secret to Playing a Real-Life Figure 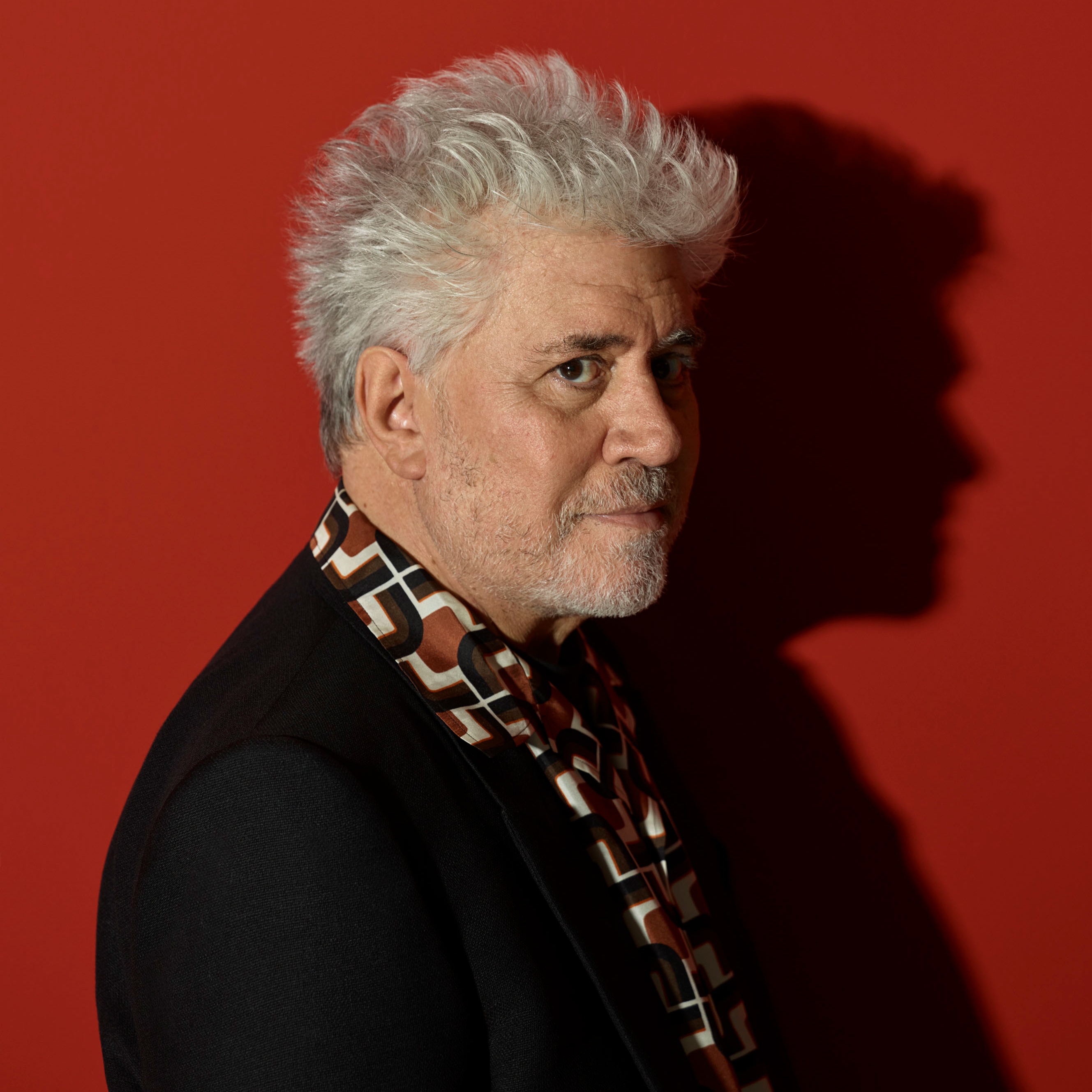 However, there are few actors whose history is as enmeshed with Almodóvar’s as Banderas. Before doing his “Laberinto de pasiones” (“Labyrinth of Passion”) in 1982, Banderas was an unknown with a single credit to his name. By the end of the decade, after five films together, the two had established themselves as a force in independent Spanish cinema, introducing unorthodox storylines with panache and adding vibrant new faces to carry them through. And while Almodóvar and Banderas maintained a friendship in the years following their work on 1989’s “¡Átame!” (“Tie Me Up! Tie Me Down!”), they went their separate ways after Banderas turned down Almodóvar’s offer to star in 1993’s “Kika,” opting instead for the American-made “The Mambo Kings.”

“Hollywood will break you. You’ll waste your talent,” the director told him. “Don’t say I didn’t warn you.”

While opportunities to head stateside came for both men—for Almodóvar, offers to helm “Brokeback Mountain” and “Sister Act” were among them—the director decided to stay in Spain and revolutionized his country’s cinematic culture as a result, while Banderas departed for Los Angeles and similarly did the same for Spanish-speaking leading men in America. It wasn’t until Banderas hit bona fide movie star status and Almodóvar, in turn, hit his own milestones with Oscar wins for “Todo sobre mi madre” (“All About My Mother”) and “Hable con ella” (“Talk to Her”) that we again saw their names on the same marquee. On their 2011 reunion effort, critics lauded Banderas’ performance and Almodóvar’s first stab at a thriller. Yet, it would be another eight years before they would reunite for “Pain and Glory,” their seventh film—and some of their best work to date.

Like other Almodóvar works, the film’s narrative flows like a series of concentric circles, this time around aging filmmaker Salvador and his recollections of the formative chapters of his life. From a childhood love of film and vivid memories of his mother to his later creative and sexual awakenings, the instances appear almost like stand-alone vignettes that are woven together to build a web of defining moments. Appearing in them are Almodóvar regulars Penélope Cruz (“Volver”), Julieta Serrano (“Women on the Verge of a Nervous Breakdown”), and Susi Sánchez (“The Skin I Live In”), plus well-known Hispanic actors like Leonardo Sbaraglia and luminous newcomers Asier Flores and César Vicente as the respective young Salvador and his first crush. 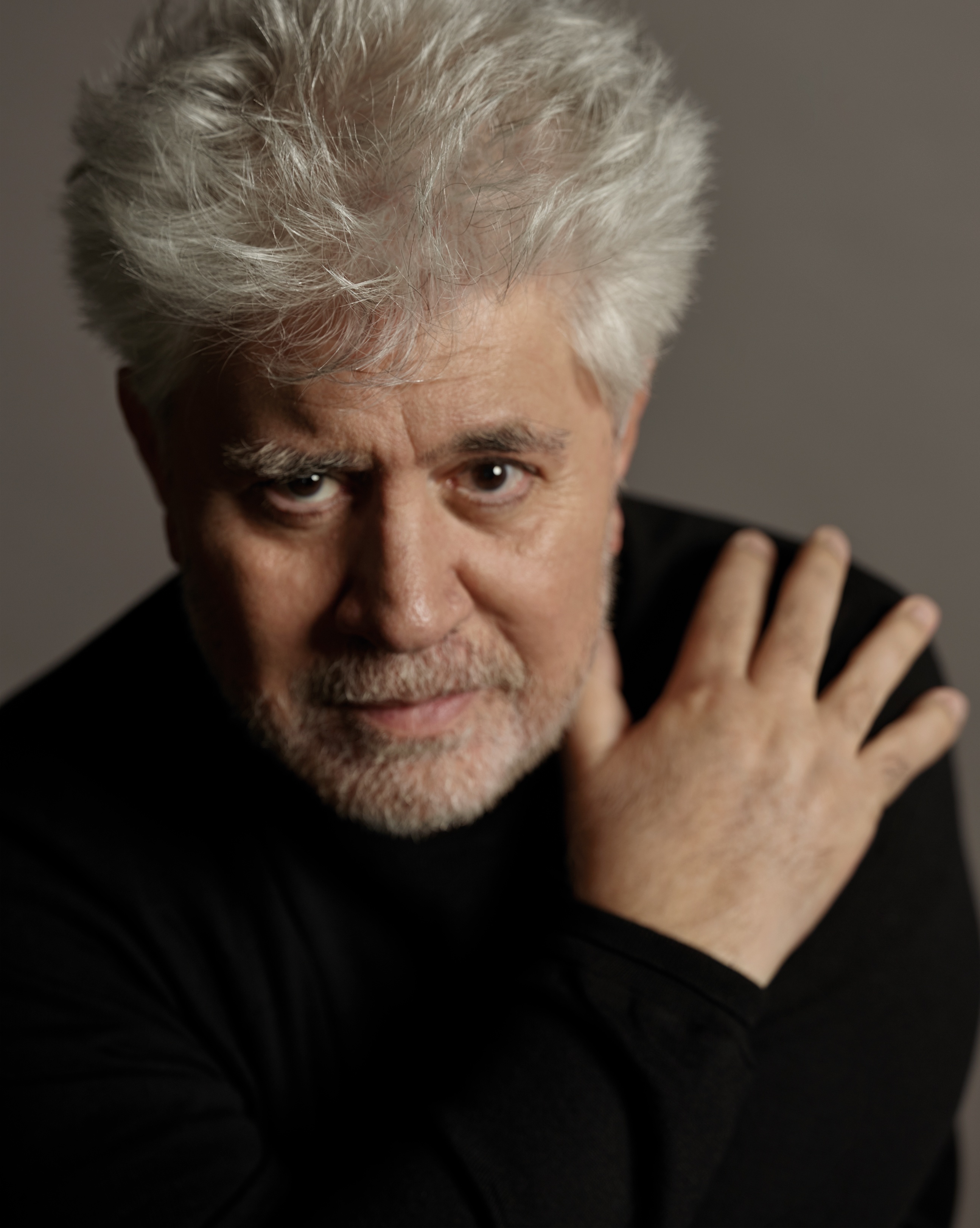 In addition to the emotional work that came with the role, Banderas built his character through a calculated outer transformation: He styled his hair like Almodóvar—white and sticking straight up—wore some of the director’s clothes, and was surrounded by his possessions throughout filming. His physicality was also taken from the filmmaker’s own experience with chronic pain. Details like placing a pillow on the ground before kneeling to pick something up or wearing shoes without laces were directly lifted from Almodóvar.

Beyond the tangible cues and a colorfully animated recap of ailments, the audience needed to feel Salvador’s suffering, and Banderas’ subtlety was essential to making it work. Almodóvar told him early on that he could not become a caricature of the aches, pains, and migraines; he had to refuse the tendency to overindicate.

“ ‘The character cannot become a masterpiece on how beautifully Antonio interprets migraines,’ ” Banderas recalls Almodóvar warning. “Actors, we have a tendency, if we find a character like [Salvador], it’s like a gold mine—‘I ache!’ ” he declares, performatively scrunching up his face and reaching for his lower back. “But you have to trust that overall, that is going to be very destructive. It’s going to distract the audience from the real issues.”

Playing Salvador required clear physical choices, but it was a far cry from the physicality required of Zorro, for instance. Living his discomfort in smaller ways—moving with a sense of uncertainty and the anticipation of pain—was enough for him to feel he was doing the character’s body justice.

“Antonio is a very alive person, so he had to be serious and more pensive than he usually is,” says Almodóvar. “The acting and the performing, it was this kind of gravity in the character because he is living a really bad period of his life—that was the main thing. But it’s something that you do with the entire body.”

As with shaping the physical performance, Almodóvar was fastidious in re-creating his apartment. It’s an ornate collection of beautiful things: wall-size paintings; dozens of books; vases all in the same palette of blues, reds, and whites; magnets arranged on the refrigerator like a mini art gallery. 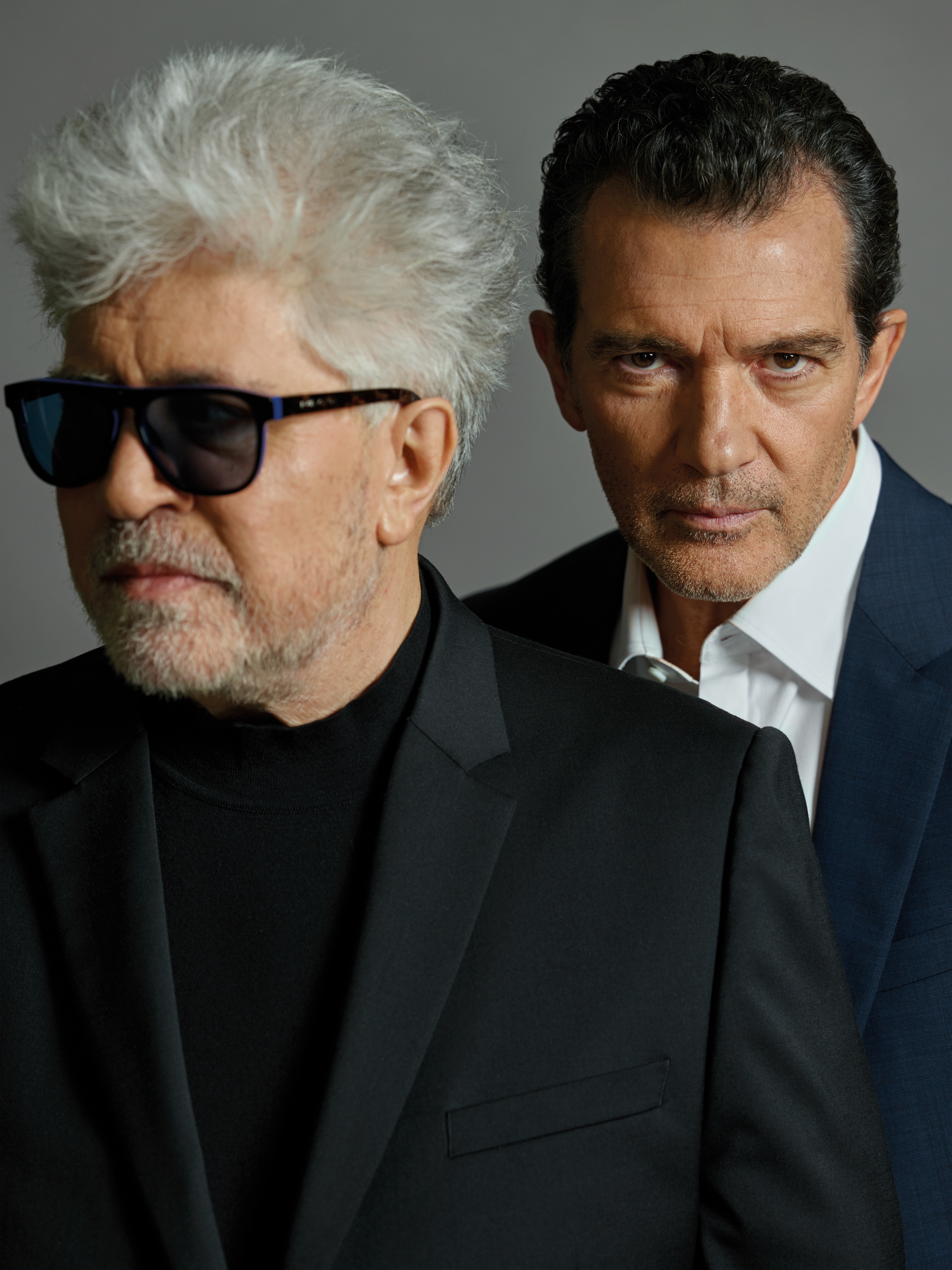 “What I was very interested in with the place where he lives is that he has an immediate past, that it was very colorful and very alive,” says Almodóvar. “He was a very colorful man; he also had a lot of success. The glory that I put in the title? The glory is the apartment full of wonderful paintings.”

“Pedro is very picky with objects,” says Banderas. “Everything that surrounds the character and surrounds the scene—the books, especially, because those books are sending messages—everything that is in there is for a reason. It’s not like they put things [there] just to dress the table. Pedro goes, ‘I want this book here and I want this one there, and I want this to read [this],’ so you see him walking around you on the set, not only just taking care of you, which he does, but at the same time taking care of the surroundings, the color of the sheets, the size of the pillow, the color of the furniture, discovering that suddenly my reflection in the red furniture on the [viewing] screen was very interesting. So, you play with him as much as you can.”

That playfulness is mutual, particularly when it comes to the writer-director’s scripts. Almodóvar often uses preproduction rehearsals to gather information as a screenwriter, tweaking sentences and interactions to the end. “When you write, everything is very abstract,” he says. “I don’t talk in the same way that I write. I write better than I’m talking. But the dialogue should sound real, not well written, so during the rehearsing, I almost rewrite the script, adapting for the actors that will be the characters. I’ve found that I can make a lot of corrections on my own script. The script is a work in process, and it is never ended until you finish the movie. The script is always alive. And shooting is a situation that’s very alive. Even without realizing it, the actors gave me information about what I should do.”

In one instance, that feedback was so rich it inspired two new scenes, which Almodóvar wrote the night before they were set to film and handed to the actors in the morning. The interactions, which flesh out Salvador’s relationship with his mother, were expanded upon. Ultimately, Banderas opposite Serrano as his mother and an exchange with Sbaraglia as his former lover yielded some of the actor’s most touching and layered work in the film.

High praise for “Pain and Glory” has been a surprise all around, but for no one more than Almodóvar. Initially, he felt a story about a nostalgic gay director in the twilight of his career would leave his audience detached. “[I thought,] Nobody’s going to watch it,” he confesses. “I was conscious I was talking about things very private, very personal. I wanted to do it, but I thought that nobody would be interested.”

So, again, the question of autobiography comes up: How much is true to Almodóvar’s own life? Banderas is quick to jump in on his director’s behalf.

It’s just one example of the understanding that exists between the pair. “Pain and Glory” is the result of a director and an actor rejoining and trusting each other implicitly. As Almodóvar puts the secret to their fruitful union, “Si tiene fé así mismo en mi, en la combinación de ambos, las cosas salen siempre seguro.”

Or, loosely translated: “Actors, have faith in yourself and your director and everything will come together as it should.”

Briana Rodriguez
Briana is the Editor-in-Chief at Backstage. She oversees editorial operations and covers all things film and television. She's interested in stories about the creative process as experienced by women, people of color, and other marginalized communities. You can find her on Twitter @brirodriguez and on Instagram @thebrianarodriguez
END_OF_DOCUMENT_TOKEN_TO_BE_REPLACED