Sex on Camera + How Intimacy Coordinators Protect Actors on Set 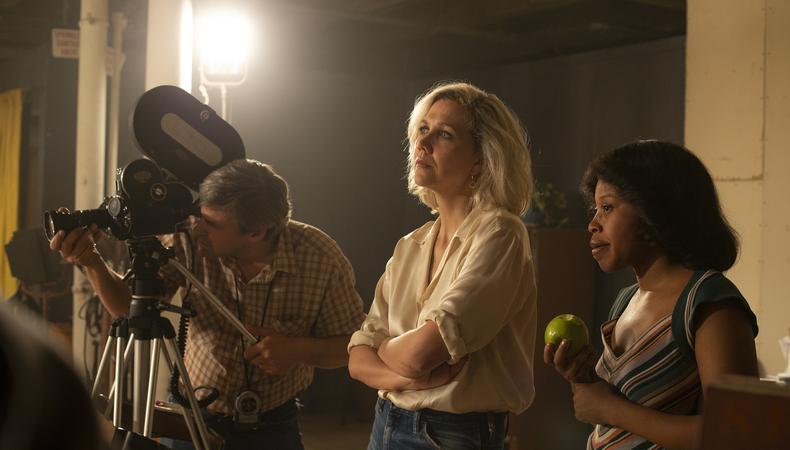 How did you get involved in this line of work?
Coming up as an actor, I mostly worked in theater. As I became a fight director, I was also working in theater, and then began working in stunts, and that was my transition into film: working as a stunt performer. It was during that transition that I also started working as an intimacy director.

READ: Should You Do Nude Scenes?

Given the current cultural climate, do you think intimacy specialists are becoming more commonplace?
Absolutely—and literally becoming a requirement. HBO has made it mandatory on all sets to have an intimacy coordinator when there are scenes of intimacy, and from what I’m understanding, there are other studios that are taking that leap.

Why is it important for an intimacy director to be present?
Part of it is just for better storytelling. Part of it is so that everyone is on the same page as far as the communication of what the story is, so that we all know exactly what is to be expected, and the rest is about safety. We are in this cultural crisis as an industry but also as a culture. It’s recognizing that there is a system of imbalance in film, in theater, in all entertainment. Part of the narrative that we have had as actors is “Just go for it no matter what.” And if you say “no” or even “hold on a minute,” you’re difficult. We have all bought into this mysticism and romanticism about intimacy in general in filmmaking, but it’s simply not the case.

Is there a misconception around intimate scenes?
We love to hear stories about actors getting drunk before sex scenes and [stories of] “Oh, they really had this relationship.” We feed into it as a culture because it’s fun and interesting and sexy, but at the core of it, we are professionals who are represented by unions and we are going to work. So yes, there is a sort of magic that can happen on set, but at the end of the day, what is it that is stopping someone from being accosted or assaulted on set versus telling a story about that? Having someone there—who has been trained in conflict negotiation, who has been trained in movement direction, who has created a process of how to frame these scenes and how we approach them—is what allows us to remind everyone that we’re in a professional environment and we’re at work.

What’s the process for coordinating an intimate scene? Do you first break it down with the director?
That’s absolutely it. I come in just like any specialist coming into a scene. I read the script, I see what the story is, and then I meet with the director or the showrunner and say, “What exactly are you looking for in this scene?” There are times in the [script] where it just says, “They undress and begin having sex,” and that’s the line. There are so many nuances as far as what exactly is the story we’re telling? What kind of sex is this? What are we showing, and what do we know the actors are OK with? And then we have that conversation, so that when we get there on the day we’re filming, everyone knows what’s expected of them.

Does it make you wonder how these scenes even existed without this position?
That is something that I talk about with actors, where I’m like, “What has your experience been and how can we improve it for you?” And they’re like, “Just the fact that we’re having this conversation…” It’s not necessarily that anyone has been malicious or had negative intent, there just hasn’t been a process that has been codified.

Can you talk a bit more about your relationship to actors?
After I discuss with the producer, the director, the showrunner, I then have a conversation with the actors involved and make sure that we’re all on the same page. I explain to them that I’m the intimacy coordinator, and that means I’m the liaison. I’m the movement coach and I am an advocate; I’m here for you so that you are always in the loop. It’s even small things like making sure the actor knows that for rehearsals, you don’t have to take your robe off. Everyone is dealing with so many other things; we have the lights, we have the sound, the camera. Just having one person there for this specific thing has been invaluable. When I’m working with actors, I make sure I read exactly what it is in their nudity or simulated sex rider so that there are no surprises, and I ask them if they’ve had experiences doing intimacy on set before and what they need.

How do you establish trust with the actors?
One actor might be very relaxed, but there are other actors who might need some extra support. I’m there to continually communicate to them throughout the process so that they know exactly what is being shown. Most of the conversations that I have with actors are confidential; they’re between us so that if there is an issue, the actor isn’t the one who has to run to the producer and say something. They can also flag me as a resource so that I can say, “Hey, can we take a moment?”

Are you hopeful that this will be the new normal in entertainment?
Yes, and that’s what’s really exciting. I’m now training new intimacy coordinators for HBO, but I still do a lot of work for conservatories and universities because it’s this generation of actors coming up. But it’s also the actors who’ve been out in the industry for years who get to see this big change. I also always have to address how to work without an intimacy coordinator, which is: You ask for an intimacy coordinator, just as you would ask for a fight director. But also know that you can advocate for yourself. You’re not being difficult; you’re not going to lose your job. And if it is someone who would fire you for asking to be taken care of, why would you want to work with them? It’s what I say to companies when they’re like, “We just don’t think that that’s necessary.” Well, you’re either on the wave or you’re under it, and this is not going away.

Casey Mink
Casey Mink is the senior staff writer at Backstage. When she's not writing about television, film, or theater, she is definitely somewhere watching it.
END_OF_DOCUMENT_TOKEN_TO_BE_REPLACED