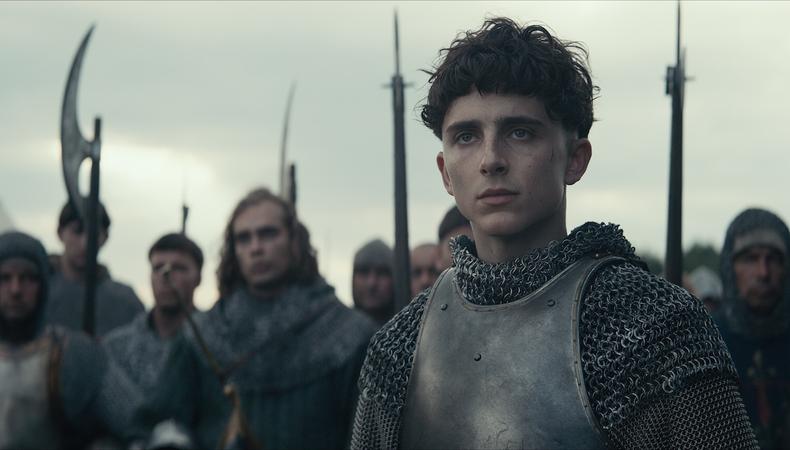 After her work on last year’s Oscar-winning hit “The Favourite,” production designer Fiona Crombie was actively pursuing contemporary pieces, turning away from a run of period films. However, when the Timothée Chalamet–starring “The King”—set in war-ravaged 11th-century England—beckoned, she was powerless to resist. Here’s how the film’s spectacular battle sequences came together and how actors can truly “own” every set they walk onto.

From a design standpoint, what about “The King” made you want to sign on?
It’s always what’s on the page, and I do immediately think, “Oh, this is interesting.” I was a little unsure about [“The King”], because I had just done two quite hefty period pieces in a row, so I wasn’t looking for a period film. In fact, I was looking for the opposite. But I thought it was really well-written and I really like what [director] David Michôd and [producer] Joel Edgerton brought out of the story, and I just really liked the language of the film. When I Skyped David, he was immediately direct about what he hoped for, visually. He wanted it to be faithful to the period, but he also was saying, if you actually investigate the period—you often don’t see it on film, the interpretation tends to be very grey, and it’s always stone. In reality, it was white-washed walls, it was actually brighter and more colorful, the way they decorated at that time—[it was] more complex than you often see. He was really interested in exploring that. And I said, “You know what? That sounds good.” I mean, I’d made an 11th-century film in the past that was all stone and brown and mud, and so I thought, I can delve into this.

You have done a lot of period pieces, but you’ve also designed for contemporary projects. What’s different about those two feats?
What is always really enjoyable—and one reason why I think I am suited to period pieces—is that I learn a lot. I’ve always been interested in history, and I enjoy finding aspects of the period and really, I’m just teasing them out for the design in a way, finding something that you just want to claim is true through the course of the film. I’m someone who enjoys layering and details, and I think that suits both contemporary and period films. One thing about “The King” was heraldry. Heraldry is so complicated, the kind of visual language of all the flags, and heraldry as communication is so complex. Every single symbol that’s in the film is relevant; if you’re on a battlefield and you’re communicating with your army, you need flags. There’s no loudspeaker, there’s no radio. Visually, that’s really interesting: all these fantastic geometrics and colors and symbols. I found it really beautiful to look at, and it’s things like that that grab me—and then I just put them all into the film.

READ: How to Be the Production Designer’s Favorite Actor On Set

I did want to ask about the film’s remarkable battle sequences. Of course, many people touch those, but how does your role factor in?
Everything was individual; there was no uniformity. We had different sets of horse armor made, different ways of directing those horses. In many ways, it’s quite confusing. You can’t tell the difference between the French and the English in the battle, and that’s quite deliberate, because, actually, they almost look the same. For us, it was very much about researching the right weapons, the right kind of sword; was it a really long sword, which is very hard for an actor to wield, because they’re really heavy? Even when they’re fake, they’re heavy. It was all about the detail. Shooting that was arduous. My admiration [is] for every single person out in that barge. I mean, I just sit on the sidelines.

How would you say your work affects an actor’s performance?
My job is very much about giving them a sense of place. What is really complicated for me when I’m working on a period piece like “The King” is there wasn’t a lot of stuff [back then]. Usually, if I’m doing a bedroom for someone, I can populate it with certain quirks or give some really nice character detail that gives you a sense of who that person is, whether it’s something on a wall or a photograph. I can’t do that when I’m doing the 15th century, because books were extremely rare and precious. Just dressing a shelf—when we were doing the apartment, trying to give that a sense of it being like a bachelor pad, I’m not able to give those hints to an actor with the level of detail the way I am in a contemporary film. But what I can do is give them an immediate sense of time when they walk in and [help them] get a sense of being in the place, and then hopefully it informs how they feel [and] helps them get into, not necessarily their character, but the time in which the character is existing and the circumstance and the environment. And again, I do that because I really love all the details, so we pay a lot of attention to the mud going up the walls. We had a lot of things made, all the things that they hold in their hands, like pottery. The right designs, I would like to think, are very helpful and transport the actors into the time.

Do you like when actors are opinionated about the spaces their character inhabits?
I love that! It doesn’t happen as often as you would think. I was a theater designer [previously], and there were a lot of conversations about the time. Immediately, the first thing you do when you start a rehearsal period is you stand up as the set designer or costume designer and explain what you’re doing, and do a presentation. And that doesn’t really happen in film. I’ve had actors email me and say, “Hey, listen, I’m thinking I need this and I need that,” and I actually love that because they’re coming at it from often quite a layered place; they’re coming at it from a different place than me. I think that’s always really helpful. The thing that I do think is remarkable is the way that an actor who’s never set foot in the space will own it immediately. It’s an amazing skill.

What are some of the ways you have seen actors truly “own” the space?
In some ways, it’s just a presence. I’ve seen it a lot, but I remember specifically one time that really struck me was when I was working on “Macbeth” and we were doing the big banquet scene. Michael Fassbender walked in and he was chatting with the director and he was sort of looking around. And then, on the first take, it was like he had really quickly taken in where everything was and what he could touch and what he could use, and he just owned it. He roamed around and sat down somewhere and picked something up, and I just thought, That is extraordinary. No one told you what to do. He was a king, it was really quite electric. Then they all go saying to him, “Do you want to have a seat in it, do you want to check that it’s good for you?” I remember him saying, “I don’t want to sit in it until it’s the first time I’m sitting in it." He didn’t actually want to practice things like that. He wanted to live them.

Is that just an instinct? You either have it or you don’t?
Oh, absolutely. You work with people who are so seasoned, they know where the lighting is, they know how to maneuver their body, they know how to present themselves, they know what to do with their voices. It’s such a craft. And in the same way, my spaces don’t come alive until people walk in them. They’re lovely, but that’s when they come alive.

Casey Mink
Casey Mink is the senior staff writer at Backstage. When she's not writing about television, film, or theater, she is definitely somewhere watching it.
END_OF_DOCUMENT_TOKEN_TO_BE_REPLACED