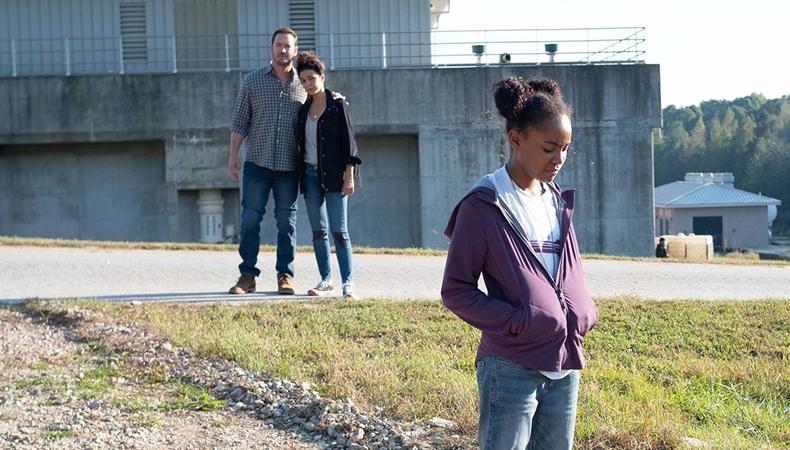 Carrie Audino, along with her partner Laura Schiff, are no strangers to populating a not quite human world. With tenures on Syfy’s “The Magicians,” AMC’s “Fear the Walking Dead,” and more, a show like Fox’s “The Passage” was another opportunity to find actors with the range to play convincing humans and monsters, sometimes in the span of one scene. It was a complicated undertaking, from finding convincing doctors and law enforcement officials to assuring actors could possess both the human and nonhuman sides of a creature that defies classification. In the end, they had filled out an ensemble cast around a child star and some familiar names and created a world that felt just a little too close to reality for comfort. Audino talked to Backstage about how they did it.

What was the casting process like for “The Passage”?
It was a challenging period and process for all of us, as it often is during a pilot season, and we didn’t have time for chemistry reads. But we did do extensive reads for Tim Fanning, which is the role Jamie McShane has, and for Nichole Sykes, which is Caroline Chikezie’s role. Not to say that we had a hard time with them, but they were roles that we really wanted to get right because they’re so important to the show. We read a lot of people. We’re the kind of casting directors that dig in and like to read and meet new people, and it worked out for us. Caroline is British and somebody that we’ve had our eye on for a long time, and she came in and nailed it.

Do actors need something special to be able to pull off a part with a lot of jargon or that works in a specialized field?
If we’re doing like medical drama, sometimes there is additional training and information and places we might point them to. Not all actors can do that, not all actors can say those words or make them believable. It’s hard. And that is just part of the casting process, asking, “Do you buy this person as a very good professional doctor?” “Do you buy that this person was also in the military, and had all these people working under them is also a doctor?” I don’t want people to have to suspend their disbelief too much. We were trying to not create that kind of show where it’s like, “Look at all these gorgeous people that there is no way they are doctors.” Plus, every showrunner, studio, and network have their own needs as far as what kind of actors they like to cast. It’s always a lot of moving parts.

READ: 10 Tips for Your First Time on a Television Set

The characters in the show aren’t all human, how does that affect the casting process?
There was monster training that happened after people were cast. They learned how to run and make the faces, and do all the things they needed to do. It’s really specific and I think when you’re creating these kind of roles, it needs to be consistent because all the monsters are the same kind of monster. So, they had lots of training and rehearsals, regarding how to act like a particular kind of monster. I think it really paid off because there is a consistency to all of their performances when they are the monster versions of themselves, and it’s so cool and convincing. The truth is, if they’re good actors, they are okay to abandon themselves, they’re very free and able to say, “Okay, I’ll do that, I’ll try that. That’s fine.” I do think you can’t be too self-conscious as an actor and play these kinds of parts. You’d be embarrassed all the time, and you don’t want to be embarrassed and play this version of a monster, you need to go for it. And I think every single one of these actors did, in the best possible way.

And how does it manifest in auditions?
We had them do scenes where they were the monster, the menacing, talking version of the monster, especially with Jamie McShane. He does a lot of talking and manipulating. He’s the big bad and we really needed to make sure we bought him as menacing and the enemy, and very smart and cunning and these other things. He’s a tremendous actor with a huge body of work but this was different than what he’d done before. What’s interesting too, is that they play the human versions of themselves and then they play the monster versions of themselves, the talking monster versions and then they play the monster monster. There’s sort of three different versions of those characters which is super challenging.

How is this project unique to other casting jobs you’ve had?
We kind of had experience going into this and doing this kind of work [on “The Magicians”], but I do think this show is a lot darker than that show, so it’s not a different kind of actor, but we needed people really to handle the very intense dramatic aspects of what we were creating, which the show has a lot of. I cast the same kind of actors in everything, because I want good actors. So, to me, I’m not like, “Oh, well we need to have this guy, he’s just good for me,” it’s like, “No, we need to have a good actor, but also have good human material.” I don’t like to just put actors in boxes and say, “Well, this guy only does this and he can’t do it.” I like to believe that if they’re good actors, they can do lots of things. That is how it is in our office. We really like to focus on making sure, first and foremost, that we’re bringing in proper actors. Because there’s no big secret to casting these kinds of roles other than these actors get to play really different parts. We’re not asking them to play a doctor or a lawyer, we’re asking them to play something that’s not even human.

What were some of the challenges that you ran into on casting the show?
A lot of these roles are people that are doctors and monsters and it’s saying, “Oh, those people have authority, but they have to speak. It’s life or death for them all the time, in what they do.” But you really have to believe that they do their jobs. And some actors, you just don’t believe it, it doesn’t matter how good of an actor they are. You’re just not a cop, you’re not a good doctor, you’re just not—and that’s okay. You’re something else, but you’re not this. To me, there’s not a bottomless pit of people that can play these parts and do the technical dialogue and be confident, and believable. That’s the challenge that it’s not an endless supply of actors that can play these kinds of parts. It’s much more about confidence, attitude, how you hold your body, and how you say the words that determine whether you buy it or not. I knew once we had a proper actor that they were going to be able to sell whatever we asked them to. I was never worried that McKinley Belcher was going to be able to play the monster version of his character, he was just so good.

What advice do you have for actors from the point of view of a CD?
There are so many versions of this question, but the simplest version is be prepared. If you’ve got an audition, you’re there for a reason, we’re on your side. It’s okay, you’re allowed to ask questions, be aware of who’s in the room, be aware of other people’s time, and come in and do your job. It’s a job transaction, a business transaction, and you need to be professional and then you need to say thank you and go.

What can someone do to be memorable in the audition room?
That’s the essence of my job. There’s nothing that anyone can do other than their job than be good that would make me remember them. It’s my job to remember them, it’s my job to say, “They weren’t right for this, but they were good. Keep an eye out for them.” So many of the notes are, “Keep in mind, keep in mind for something else, keep in mind...” Actors don’t realize what it would take for me to say, “Never again.” It’s okay to have a bad day in the room, I can see what an actor is about, that’s my job. It’s okay to mess up words, it’s okay to have all those things happen, it doesn’t mean I’m never going to see you again. It might be that it didn’t go that well and I’m not going to consider you for this, but you’re probably going to see me again. There are a lot of roles to be cast, so I don’t just rule people out; I mostly want to include people, to figure out where they’re going to be right, whether it’s something that is big or a totally different character probably, but that’s the essence of what I do. Sure. Having an air of professionalism and realizing that it’s a business transaction and that we’re not at some big acting party is super important, and I do think actors, especially inexperienced actors, lose sight of it. Yes, this is your moment with me, and you should take advantage of it, you need to be conscious of what’s happening. Read the room; pay attention. There are other people waiting or actors wanting to have massive long conversations. It has nothing to do with how much I like or dislike someone, it just has to do with keeping the day moving forward. I wish I could just chat with everybody, but I cannot.

What can an actor expect from auditioning for you?
I think they would feel generally very welcome, and they can expect to walk into a room where we’re going to be on their side. If we see a reason to help them through it and give them notes, we will. Actors think back to all those times they got no notes, and it doesn’t mean it went wrong or it went poorly, it means that you weren’t, maybe, right for it. It maybe means you’ve nailed it and there are no notes, it could mean a lot of different things. I try and be as communicative as possible, without ever tearing anyone down. Often I read people that I like for things, and I don’t give a note, or I often do take notes. Don’t read too much into any of it.

Elyse Roth
Elyse is a senior editor at Backstage, where she oversees all casting news and features content, including her weekly casting director Q&A series, In the Room. She came to New York from Ohio by way of Northwestern University, where she studied journalism, and now lives in Brooklyn. She might see and write about awards-worthy films, but Elyse still thinks “Legally Blonde” is a perfect movie and on any given night is probably taking in some kind of entertainment, whether it’s comedy, theater, ballet, or figuring out what show to binge next.
END_OF_DOCUMENT_TOKEN_TO_BE_REPLACED