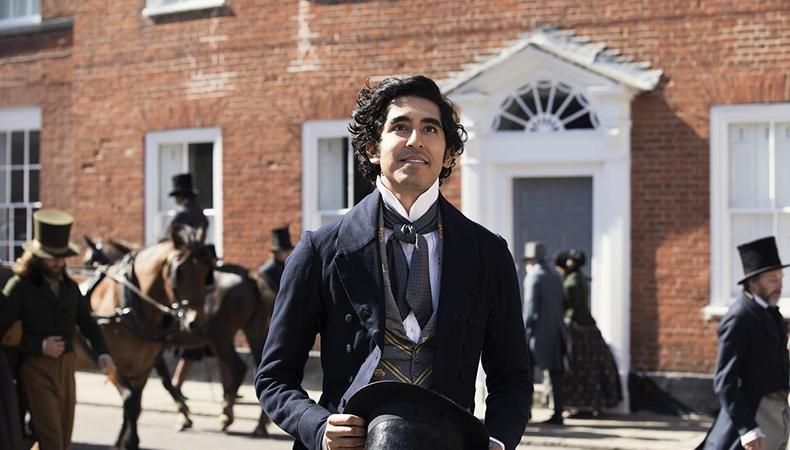 The Personal History of David Copperfield leads BIFA nominations
The British Independent Film Awards (BIFA) have announced their full list of nominations, with The Personal History of David Copperfield, starring Dev Patel, in the lead with 11 nominations. Country and western musical Wild Rose, starring Jessie Buckley as a Glaswegian singer dreaming of success, counted 10 nominations. The film also scored well at the Scottish BAFTAs last weekend with a hat-trick of wins. BIFA Best Actress nominations see Jessie Buckley up against Holliday Grainger for Animals, Sally Hawkins for Eternal Beauty, Vicky Knight for Dirty God, and Renée Zellweger for her role as Judy Garland in biopic Judy.

Dev Patel competes for Best Actor with Sam Adewunmi for The Last Tree, Tom Burke for The Souvenir, Josh O’Connor for Only You and Kris Hitchen for Ken Loach’s Sorry We Missed You. Although Loach’s film has one more nomination for Best Screenplay, the fact that the veteran director missed a nod has surprised some in the industry. Winners will be announced at a ceremony in London on 1 December. Read more here.

His Dark Materials becomes biggest new drama for five years
The BBC’s lavish adaptation of Philip Pullman’s His Dark Materials drew record viewer numbers ahead of its launch on HBO in the US. The blockbuster fantasy series drew 7.2 million viewers on BBC One last Sunday, becoming the largest audience for a new drama on British TV for over five years. According to official figures, His Dark Materials was the most-watched drama debut on UK TV since BBC One’s The Musketeers was watched by 7.4m in January 2014. Starring James McAvoy, Lucian Msamati, and Ruth Wilson, Jack Thorne’s adaptation of one of the most popular and acclaimed young adult series of all time has drawn hugely positive reviews and was received in more favourable terms than the 2007 film of the book.

Leading theatres turn down Sackler funding
Two of London’s leading theatres have refused funding from the Sackler Trust after the money has been linked to the opioid crisis in the US. The Sackler family have become one of the most controversial arts and heritage funders after claims that their fortune is built on the deaths of 218,000 people addicted to prescription painkillers in the past two decades. The Roundhouse and the Donmar Warehouse have both turned down funding from the Sackler Trust, with the former refusing a £1 million donation.

Earlier this year, the National Portrait Gallery became the first major institution to distance themselves from the Sackler family, a move hailed as a landmark victory in the battle over the ethics of arts funding. In recent months the RSC became the first major theatre to give in to pressure from audiences and actors, breaking with sponsors BP.

A spokesperson for the Roundhouse said the theatre was “enormously grateful for the trust’s support over the years, but we have made a decision not to accept the donation at this time. To do so risks distracting from our work with young people, and that’s our priority.” The Guardian reports that other theatres receiving grants include the Young Vic (£375,000) and the Old Vic (£350,000).

‘Terrifying’ moment Piccadilly Theatre ceiling collapses
Audience members have told of the “terrifying” moment a part of the ceiling collapsed during a production of Death of a Salesman, causing minor injuries to those seated below. One audience member at London’s historic Piccadilly Theatre reported a “clicking sound more or less as soon as the lights went down” before a part of the ceiling collapsed. Another ticket holder, Laura Kate Jones, confirmed on Twitter that the ceiling “fell in” 20 minutes into the show and that “people were running and screaming to get out – truly terrifying.” They also praised front-of-house staff for their swift response, calling them “bloody legends.” The collapse at the Piccadilly Theatre becomes the second incident at a West End theatre since 2013, when part of the Apollo Theatre’s ceiling fell in during a performance of The Curious Incident Of The Dog in the Night-Time.

Royal Conservatoire alumni go public over ‘abuse’
Students and recent graduates from the Royal Conservatoire of Scotland (RCS) have accused management of failing to act against “grave discrimination and abuse” at the school, including transphobia and racism. In an open letter published on Facebook last week and a petition that swiftly followed, a group of alumni and current students from RCS’ Contemporary Performance Practice degree claimed that an official complaint against staff earlier this year was upheld by the leadership. However, months later the group say they were forced to go public after the school failed to “adequately address the grave discrimination and abuse faced by so many students on the CPP programme.”

Screen production news
Director Matt Reeves is reportedly looking to bag Colin Farrell to play criminal mastermind The Penguin in his remake of The Batman. Deadline reports that negotiations are ongoing to have Farrell complete the trio of villains battling Robert Pattinson’s vigilante Batman, with Paul Dano attached as The Riddler and Zoe Kravitz as Catwoman. Andy Serkis is rumoured to be attached as Pennyworth, the caped crusader’s loyal butler and family friend. The Batman is looking to film in the UK, with production either beginning shortly or in 2020 ahead of a 2021 release.

Stage production news
Josie Rourke’s production of City of Angels has confirmed a West End transfer, five years after the acclaimed production ran at the Donmar Warehouse. With a score by Cy Coleman and David Zippel and book by Larry Gelbart, the musical is described as a “love letter to the glamorous world of old Hollywood and film noir.” The story, originally seen on Broadway in 1989, follows twin-stories of a writer trying to turn his old crime novel into a screen hit, and a pastiche of classic film noir, set in the writer’s fictional world. Starring original cast members Hadley Fraser and Rosalie Craig, City of Angels opens in March 2020 at the Garrick Theatre.