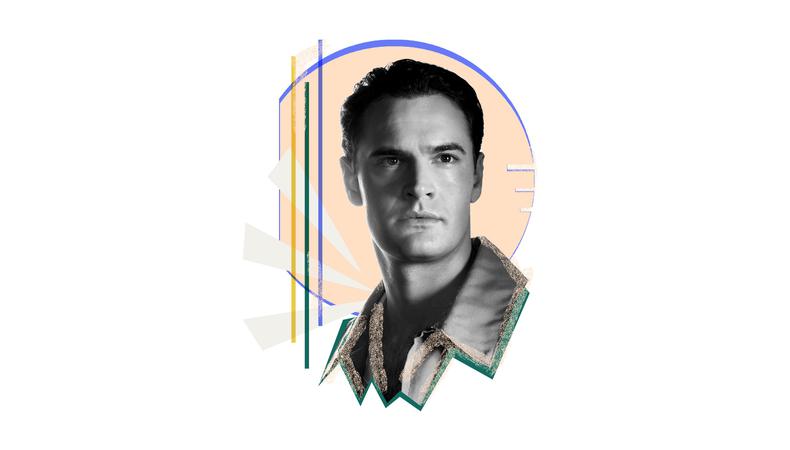 Netflix’s Behind Her Eyes is guaranteed to be everyone’s next obsession. A thriller set within a deceitful and messy love triangle, it has more twists than you’d ever expect, though one thing that shouldn’t surprise you is that star Tom Bateman shines yet again, slipping on a Scottish accent to transform into David, a married psychotherapist who is by turns charming and chilling. In a career that’s seen him shift from Shakespeare on stage to shootouts in the snow with Liam Neeson, he’s defied typecasting, losing himself in kings, lovers, noblemen, and gangsters alike. Ahead of the release of Behind Her Eyes, Backstage sat down with Bateman to find out what draws him to challenging characters, and why he never wants to stop feeling like a kid on set.

Tell us about your role in Behind Her Eyes?
David is a character who has built up walls around him due to years of deceit, hiding who he is, and what he feels. Over the length of the series, that gets challenged, as does the audience’s perception of who he is. Layers peel back and we see the damage that hiding that for so long can do to a person. This meant that every scene could be played many, many different ways, and I loved working with Erik [Richter Strand], the director, as we explored all of those. It was equally rewarding and exhausting to play him.

And what did you enjoy most about your upcoming role in Death on the Nile?
Getting to work with Kenneth Branagh again is an absolute dream come true. I’ve also never returned to a character before. In the last film [2017’s Murder on the Orient Express], my character had an interesting arc. We met him as this bumbling, privileged and carefree gentleman-about-town, but over the course of that film he matured a lot. What was great about coming back to him was Ken saying: “This story takes place a few years later, which is a parallel for us in real life.” He asked me: “How have you changed in that time?” I said I had matured, I felt a bit more settled in myself; I suppose I’m a bit more confident in my abilities. And that was reflected in my character – he’s turned away from his privileged life, he’s making it on his own and we see his challenges with his mother, played by Annette Bening. I’m not railing against my parents but I have bought a place on my own and am feeling a bit more independent, so things did run in parallel.

What do you look for in a character?
I remember something a teacher said at drama school. I’d said: “I don’t understand why my character is doing this,” and he said: “Well, that’s where the acting comes in.” It’s easy to play people you can relate to but when you have to take a leap outside yourself to understand something you’d never do, that’s exciting to me. I played a character who was violent towards his wife. I remember thinking: “I’d never do that,” so I had to apply the lesson from drama school, play connect-the-dots. I’ve been drawn to these roles because I’m looking for those leaps and challenges. It can be an exhausting and long process; it can be painful and embarrassing, especially if you’ve got a big crew around you and you’re not getting the moment. But it’s the most thrilling experience to get it right, to think: “My God, that was truthful and it was so not me.” Or: “I don’t know where that came from.” It’s the drug that keeps me going.

“It’s the most thrilling experience to get it right, to think: ‘I don’t know where that came from.’ It’s the drug that keeps me going.”

What’s the best thing you’ve learned from a co-star?
I’ve been lucky to work with some extraordinary actors, like Annette [Bening], but also Michael Palin, Simon Russell Beale. And all of them have a thing in common where they’re still excited. I remember when Michael Palin played Thackeray in Vanity Fair, he was like a kid. This guy has been acting since before I was born and there he was, still more excited than anyone else. Similarly with Annette – on our first day on set together we’re doing a big market scene and she was just so excited by the props, the design, the intricacy of the world created around us. I want to be like that – I never want to lose sight of how lucky we are to do what we do. And they don’t mess around – they’re playful, light, and energetic but take work seriously. They’re never late, they know their lines, they have ideas, they’re eager to be directed. I hope I get to work for as long as they have and carry on being as excited and as hardworking as they are.

How do you keep yourself from burning out?
Managing downtime is crucial. If you go from job to job without a reset, it all washes into one. I was very lucky, doing three West End shows back to back. I’d finish one on a Saturday, start rehearsals for a new one on Monday, but I couldn’t quite focus on the next project. I learned that it’s important to shut the door, end the chapter. We live a very transient life, it’s very intense for a period of time and then it just stops. People talk about the “post-show blues” but I think it’s important to allow ourselves to feel that drop of energy, that end of a chapter, so you can focus on the one you’re about to begin. It’s also a very demanding job and if you don’t respect those demands you’ll end up forgetting lines or not giving the performance you want to. You’ll look back and go: “Why didn’t I just go to bed a couple of hours earlier?” Or: “Why didn’t I just look after myself better?” Because once it’s gone, it’s gone. You can’t go back and redo it.

What advice would you give to your younger self?
Have confidence in your place at the table. My very first job was playing opposite David Tennant in the West End and the entire cast were actors I’d seen on stage and admired. I remember thinking: “I don’t deserve to be here.” It’s something I still struggle with. Every time I start a project, there’s always a voice saying: “You don’t belong here.” It’s something I still need work on. But have confidence. If you’re there, playing the role, it’s because they believe you are good enough. So, get rid of that doubt and just concentrate on the work, otherwise it gets in the way. If you can focus on your role, your job and on enjoying it, the rest takes care of itself.

Behind her Eyes premieres on Netflix on 17 February 2021