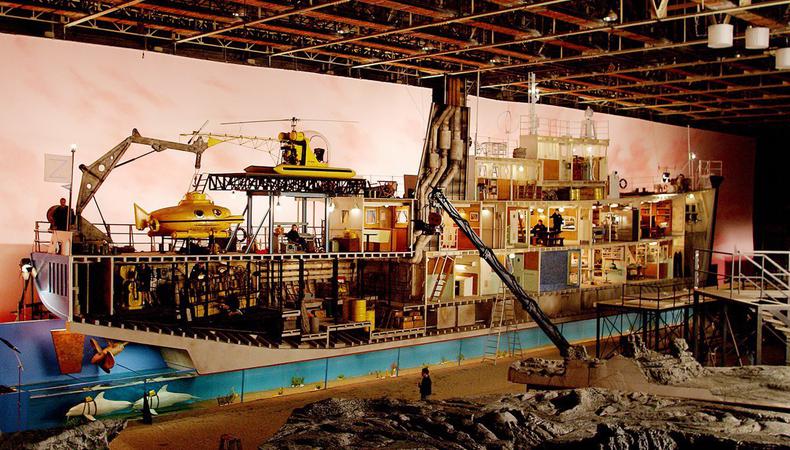 Whether it’s adapting an on-site location or fashioning a set in a studio, production designers create worlds with spaces and tell stories through atmospheres, pulling the visual elements together to create the setting of a script. Orchestrating a team of art directors, artisans, and set decorators, production designers configure a project’s environment to a specific period, location, or mood.

“A production designer creates the psychological climate for the director’s narrative, and that really means that we design and build the physical environments, which are the sets and the locations,” says Jim Clay (“Murder on the Orient Express”). “We create the whole visual content in collaboration with the director of photography and the costume designer.”

Artists arrive at production design from various paths: some are architects by training, others are scenic designers or interior designers. Of course, many award-winning production designers have no formal training in the field, but found their way into the industry with luck, hard work, and a good eye for details and colors. If you’re interested in the academic route, we’ve profiled a few of the top training programs for those who want to learn the craft of production design.

While Auburn is perhaps best known for its football team, the SEC university also has a renowned school of architecture and design. At Auburn, undergraduate students earn a dual degree in architecture and interior architecture after five years and two summers of study. With a separate admission process from other programs within the School of Architecture, Planning and Landscape Architecture, the interior design program isn’t just selective, it also situates graduates within a few hours of Atlanta—one of the nation’s largest production hubs.

“We have an amazing team of teaching-centered faculty. Their first priority is the learning experience our students take away from here,” says professor David Hinson. “We’re known around the world as a program that produces well-rounded students with an amazing work ethic and for students who put leadership and community service at the center of their values. We also have a wonderful community within the school. Our students and faculty spend a lot of time together.”

Known as being one of the most prestigious drama schools in the country, the scenic design program at Carnegie Mellon prepares students to work as designers, art directors, and production designers across mediums. Students engage with the curriculum in a multifaceted approach, using everything from text analysis to robotics to multimedia. Successful alums working as production designers in the industry include Jeff Crye (“Law and Order”), Scott Storey (2008 MTV Music Awards), along with Joe Stuart and Jon Shaffner, who’ve been nominated for over 29 Emmys.

“As you get older in the program, you have more responsibility. You start working on productions in a higher-up role. [You’ll] work with the director and all the other designers to create a world,” says Brian Grego (class of 2010). “If you’re dedicated, if you love what you’re doing, and you want to spend the next couple of years working as hard as you can to be as good as you can, it’s the right fit.”

For a graduate program that exposes you to A-list mentorship and practical experience, Chapman is the place for designers to refine their craft. The two-year MFA production design program teaches students not only how to use the tools of the trade but to create a vision for the world of a show or movie. Under the guidance of close mentorship, production design students at Chapman exercise their training for student projects and thesis films within the MFA film department. Working with professors like John Chichester (“Pirates of the Caribbean”) and Cynthia McCormac (“Father of the Bride”) is undoubtedly a plus too.

“The greatest thing about the school is that the students are really good. They know how to be students—they’re very motivated and excited to be there. The students have great ideas and they want to expand their horizons.”

NYU’s Tisch School of the Arts offers a production design MFA program that trains students not only in artistic form but analysis and collaboration, too. Classes range from the contexts and cultures of opera and playreading to design for film. Studying in Manhattan places students in the middle of the action in one of the nation’s culture and entertainment hubs.

“It’s a privilege to be in a department with [professors who are working] Off-Broadway, Broadway, internationally, whether it’s theater, film, opera, dance,” says graduate Ramaj Jamar. “Not only are you in the room with these geniuses, these great artists who are helping you evolve, explore your work, improve, but you also see them working and you get a chance to see what their process is.”

For a unique take on interior design that emphasizes adaptation and modification, RISD offers a world-class program that teaches problem-solving through practice. Known as one of the most distinctive and stylistic art and design schools in the country, RISD has established a pipeline to Hollywood thanks to its film program, along with the industry’s inclination to hire students from the program for set design and decoration. Students tackle approaches in production design through studio courses in BFA and MA programs that highlight adaptation and reuse of sites and materials.

“The school truly prepares you not only for the creative world, but also for any kind of job or life,” says 2014 graduate Flora Hwang. “The community accepts the uniqueness of each member and supports each other to experiment and explore one’s creative potential. [My department focused] on concept and actually teaching us how to think, [how] to develop our own design strategies, [and] equipped us with the designer-brain….The rigor and support of experimenting and exploring at RISD will make you an all-rounded creative.”

Savannah College of Art and Design

Offering BFA, MA, and MFA degrees in production design, SCAD is considered one of the best (and fastest-growing) art and design schools in the nation. With an ever-expanding alumni base in the industry, the program allows students to select a concentration in costumes, lighting, scenic and art direction, or theme parks and attractions while also offering a top-ranked BFA and MFA in interior design that emphasizes a social and global approach to creating environments. SCAD’s Georgia location also plants students within reach of Atlanta’s thriving production marketplace.

According to Leigh Poindexter (2005), “having the opportunity to work with people who were practicing other disciplines was probably the most important thing I got to experience [at SCAD] because that’s what I do in my life now. It teaches you how to get along in the real world.”

The Design for Theater and Entertainment MFA program at UCLA not only provides students with classes on professional skills and analyses but many students in the selective program work as assistants to professors who are working in the field. One professor who distinguishes the program is Mark Worthington, the production designer for “Star Trek: Discovery,” “American Horror Story,” and “Ugly Betty.” The Hollywood location also brings in A-list guest instructors and lecturers, offering inspiration and experience to the students.

One of the few programs dedicated to production design, AFI is a renowned institution in Hollywood whose conservatory-style MFA program trains students for the wide-and-varied field of production design, from art design to narrative analysis. With many students coming from the world of architecture or scenic design for the stage, AFI’s program prepares fellows for on-screen storytelling by offering collaboration opportunities on three narrative projects in the first year, a thesis production in the second year, and a portfolio of designs. Led by Christopher Guest’s go-to production designer, Joseph Garrity, AFI’s program is considered a flagship in the field.

“From day one, they talked to us as if we had been doing film for our whole lives,” says Erik Robert (2009). “We started to learn that film language and really just stepped right into it as heads of the department.We had to figure out how to create a film and how to do the budget and go to the prop houses.”