‘86’d’ Is Dark Comedy Without Depth 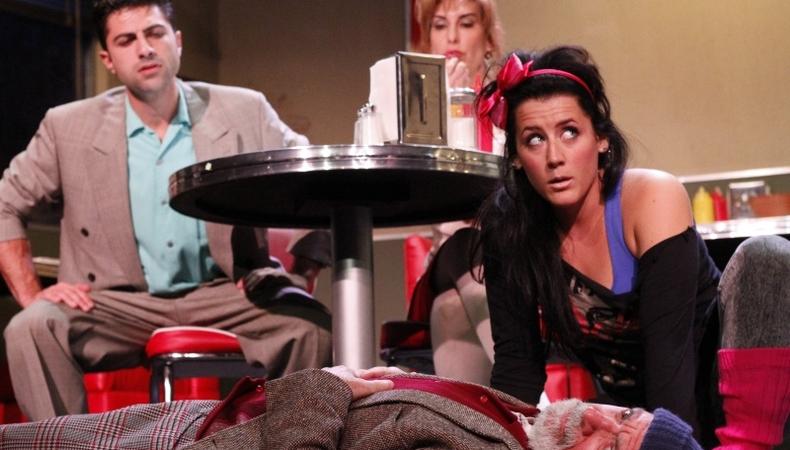 The plot of “86’d,” Jon Polito and Darryl Armbruster’s new pitch black screwball comedy, brings to mind favorable comparisons with the works of Joe Orton, Martin McDonagh, or the Coen Brothers. But while the play does have its share of blood and laughs and looks great on the surface, this dark yet wacky tale of greed gone wild just doesn’t have enough depth.

A retro jukebox plays the opening strains of Pink Floyd’s “Money” as the lights come up, and we're transported to an East Coast diner circa the 1980s. Here, we meet some familiar characters: An old-school cop and his rookie partner (an entertaining Ed Dyer and George Kolombos) sitting at the counter, a working-class stiff named Willie (a solid Michael Edward Thomas), and the heavily-accented cook/owner (Lou Volpe). Jamie Kerezsi is perfect as Angela, a pretty young waitress refilling coffee and dishing out snappy comebacks, striding assuredly in her stone washed jeans, leg warmers, and off-the-shoulder tee. And as quirky diner regulars, we’ve got Alan Erlich as a mumbling old man; a marvelous Susan Fisher as Mamie, a loopy nut-job/truth-teller; and Matt McVay as Straker, a strung-out gambler.

It's just another night at the diner until a pair of hotshot lawyers (Lucan Melkonian and Julianna Bolles as Ray Watley and Kim, respectively) come in for a quick bite, and—spoiler alert, even though it happens in the first five minutes—the old man drops dead in front of them with a winning lottery ticket in his hand.

Here's where the action of “86’d” takes off, the weapons come out, and bodies begin to multiply—and also where the writers rely on broad strokes in their hurry to get to the next plot point and punch line. So the setup is not as clean as it should be. We don’t really understand who Ray and Kim are, or why they have such sway over the diner crowd. Odd casting doesn't help; Melkonian is adorable but seems too young, while Bolles is just not convincing as a manipulative femme fatale.

Nevertheless, the play moves well and director Ronnie Marmo is a master of staging. Danny Cistone's amazingly detailed set design is realistic with just the right amount of playfulness. Matt Richter’s lighting is also on the money, and big nods go to the uncredited sound and costume design that help set the scene. (Plus, Mark Vazquez and Bill Doherty Jr. have some priceless moments as a pair of punk thugs.) But in the end, we're left looking for something we can believe in underneath the fun bits and one-liners. Add it all up and there’s too much that we simply don’t buy.