How Diedrich Bader Became One of TV’s Hardest-Working Actors 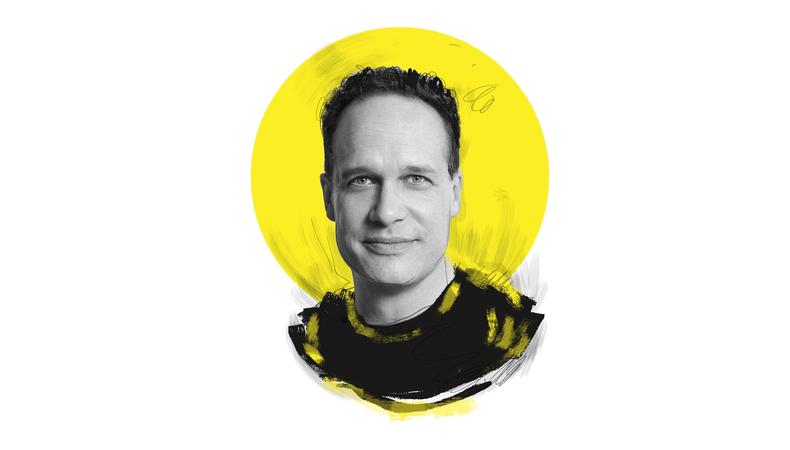 Last fall, Diedrich Bader had the unique challenge of shooting three television shows at the same time: HBO’s “Veep,” which is currently airing its final season, and FX’s “Better Things” and ABC’s “American Housewife,” both in their third seasons. Aside from working with a trio of different casts and crews, Bader had to balance the inner lives of his distinct characters and get the scripts down to boot. Here, he explains his process and how he kept it all together while working with Julia Louis-Dreyfus, Pamela Adlon, and Katy Mixon.

You were filming “Veep,” “Better Things,” and “American Housewife” concurrently. How do you keep yourself from burning out?
It was kind of bonkers at times. I shot “American Housewife” during the day and then shot “Better Things” through the night and went back to “American Housewife” and continued to shoot. There would be days where I had to memorize lines for all three characters. It was a really fascinating process. I was trained to be a theater actor at [University of] North Carolina School of the Arts, and you had to balance out all of these different characters at the same time. I didn’t know it would come in handy in such a real way. They’re all such different guys: Bill [on “Veep”] is a shark, Rich [on “Better Things”] is a sweet but sad man, and Greg [of “American Housewife”] is a professor geek who loves his wife. I am very lucky to be working for and with and supporting three incredible actresses. That’s been the true joy, discovering those incredible women.

READ: How the Actors of ‘Veep’ Created TV’s Best Comedy

How important is knowing your scene partner?
That's a big deal, too. And also [knowing] very different styles. “Veep” has a very sharp and clipped and just-the-facts kind of delivery; “Better Things” has a languorous pace to it, it’s very much the rhythm of life; and “American Housewife” has a farcical structure, it’s a little bit of a heightened reality—you talk a lot faster but you dig into the jokes a little harder, too. They’re all very different styles and the actresses have very different ways of working, so it’s a balancing act, and one that I just thrived under.

What has each of these roles added to your acting skills?
When you train at an arts school, they’re supposed to be training you for a repertory company. You’re supposed to perform one role at night and rehearse another one during the day and make these transitions and take them on and off like a coat. Finally, I was able to use my training. I haven’t had a publicity run or any time when I talked about myself since the “Beverly Hillbillies,” and I thought this was an opportunity to talk about something that was cool and a great opportunity to work on all three shows literally at the same time.

What advice would you give your younger self?
One thing that I’ve learned as I’ve matured as an actor is not to impose a character onto the script. The character can be found purely in the word choice of the writer. I really dove into the language of the writer and the different rhythms in the writing, and that's how I find the character. I used to try to push really hard and create a character that was very different from me and didn't sound like me. As I got older, I realized it’s really all in the script. The transitions are all within there. I would say to every young actor: relax. Find it in the script and go over the entirety of the lines over and over again. What I find really helpful, and this drives everybody crazy, is I read the entirety of the script every day three or four times, even scenes I’m not in, so I get the tone of everything. So I get the overall scope of the project, so I never betray the character of the show itself. I’m within the story, I’m a part of it. Rather than thinking about my bits, it’s how do I serve the scene, serve the story, serve the actors that I’m with? That’s helped me a lot, and it’s reduced my nerves a lot. That was a big problem: anxiety. I realized a lot of the anxiety came from me thinking about my part and not about the scene itself. And now that I’m a part of the scene, I relax and do my element of it. In our life, we continue to move forward. There are reflective moments, but we’re discovering the words as we go along. Return to the words and [do] less imposition of a prefigured character, that would be the advice I would give myself and also to young actors.

How do you typically prepare for an audition?
Auditions are tough. You have to bring what you have and just be entirely present within the room. Be open to change based on what they say and not how they react. I was always waiting in a comedy for people to laugh, and if they didn’t, I’d get incredibly nervous. It’s possible [that] in that room they’re not laughers. You can’t anticipate anything. Just read the script and try to think how it fits within the larger context. The most anxious I would get was at network tests. They were the worst auditions. Now they changed them [to] where you’re kind of pre-taping. It used to be you wait, you sign a contract, you stare at the other actor, they bring you in and it's a darkened room where they’re all staring at you, and you basically have one shot at it. That’s a lot of pressure to put on any audition, especially with material you got maybe two days before. They’ve changed that, in my experience in the last five years. They tend to just tape you beforehand, which is a much more civil way to do it. I would say that what you need to do is run it and read it. Just be as familiar with it as you can and try not to think too much about the character; just let the character slip out.

Subconsciously melding your own experience with the character’s.
People aren't made up of mannerisms; they're made up of thoughts and feelings and memory. All you need to do is concentrate on the script itself. I’ve played a lot of characters, and the ones I’m really frustrated about were the ones I decided I’d do a character before I worked on the script. The more you work on the script, the more the character comes from part of you and you realize you’re there and you start thinking like the person. But you have to go over it over and over and over again.

What movie or television show should every actor see?
I would say the work of Alec Guinness and Peter Sellers is just breathtakingly good. They’re people who also embody a character. They were my heroes when I was a kid. Watch your heroes and focus on what they do specifically, technically. It is a fascinating process to rewatch things that impressed you and see what the actor actually did and how subtle the work can be. And how much an audience’s reaction is projected on the actor, but at the same time, an actor has to be thinking. If you're not thinking anything, the audience gets that. I was watching something last night, it’s a truly terrible movie, and the actor clearly wasn’t thinking anything and staring blankly off into space. I realized you really do have to be thinking something.

Are you thinking in character?
Yeah, that’s the beauty of re-reading the script. And when you’re with the actors—really listening to the actors—they’re telling you what to think by what they say. If you're not searching for your line, you can really listen, and everything comes from there. I think that’s why Pam [Adlon] used me for so many reaction shots, because I’m really listening. That’s the beauty of working with such great actresses: You can listen, and everything that they say helps you be more present. If you ever feel like you're nervous and don’t know what’s happening, breathe and listen to the actor across from you and you’ll snap back into it. You have to be thinking exactly like your character. The only way to cleanse yourself of the fact that there’s a crew member three feet away staring at you is to really know the script.

It’s almost an improv way of thinking about it.
If you’re entirely present, like in improv, you know exactly what to say.

Want to break into TV like Bader? Read more from the Backstage 5 here!