A Girl With 'Grit' 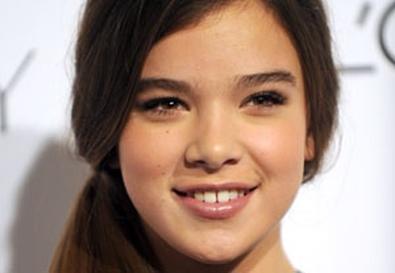 Photo Source: Getty Images
December is a big month for Hailee Steinfeld. On Dec. 11, the California native will celebrate her 14th birthday. On Dec. 22, she will appear on screens across America opposite Jeff Bridges and Matt Damon in the Coen brothers' Western "True Grit." In the film, based more on the 1968 novel by Charles Portis than on the 1969 film starring John Wayne, Steinfeld portrays 14-year-old Mattie Ross, a bright and headstrong young woman who hires drunken bounty hunter Rooster Cogburn (Bridges) to hunt down the man who killed her father.

It has become a cliché to talk about young actors as wise beyond their years, but consider this: Kim Darby, who played Mattie in the original, was in her 20s when the film was shot. Steinfeld was younger than her character, only 13, when she played Mattie. And yet she delivers a performance free of affectation, more than holding her own opposite such veterans as Bridges—indeed, quite often she steals the scene. At the same time, she never lets us forget Mattie is a teenager, not above petulant fits or tears when she isn't getting her way. When Damon's Texas Ranger isn't verbally sparring with her—and losing—he's trying to spank her.

To find their Mattie, casting directors Ellen Chenowith and Rachel Tenner had a tall order to fill. "We had a prototype: Linda Manz from 'Days of Heaven,' or a young Holly Hunter, Tatum O'Neal, or Jodie Foster," says Chenowith. "We didn't rule out better-known actresses—not that there are that many in that age range—and we did see some, but they weren't right." The pair traveled to 10 cities throughout the South and Southwest, seeing more than 5,000 actors. "In the end, they found me in their own back yard," Steinfeld says with a laugh. She had heard of the job through her mom's cousin, who is younger than Steinfeld but also an actor. After sending in a tape, Steinfeld was called in to read with the casting director and went through two auditions over a five-week period until she met with Joel and Ethan Coen. The meeting between her and the filmmaking brothers occurred on a Saturday; the following Tuesday, Steinfeld learned she had won the part. A week later, they were on location. Though it sounds like it all happened very fast, Steinfeld notes, "Those first five weeks felt like five years."

Steinfeld says she knew she wanted to be an actor since she was 8 years old and saw a neighbor in a play. "It was so amazing to see someone acting up close," she recalls. "And my cousin started doing commercials around the same time. I just found all these different inspirations that drew me into acting." But her parents told her she would have to wait a full year and take acting classes before trying to get an agent. "Up until that point, I had tried every single sport and every type of dance and everything there is, and I never, ever stuck with anything," she admits. "But as soon as I turned 9, I got an agent, and things started to pick up from there." Steinfeld says she did several student short films for the experience before moving on to commercials and guest spots on such shows as "Back to You" and "Sons of Tucson."

Once she got the part of Mattie, Steinfeld took two weeks of riding lessons and visited a shooting range with her father to make sure she was comfortable holding a gun. She had watched the 1969 film before her initial audition, since she wanted to get a feel for the role and hadn't been given a full script, and she read the book on the plane on her way to the Texas location. In addition, she worked with her current coach, Michael Woolson, to perfect the dialect. "It was hard for me, honestly," she notes. "The way they communicated back then, it's really like a completely different language." But mainly, she says, Woolson taught her the value of stillness. "I had this thing, I don't know how to describe it, except to say I kept wanting to be dancing with my feet," she says. "I couldn't stand still. And my coach would stop me in the middle of a scene and say, 'You've got to stand still.' I realized that Mattie is not the type of person to ever step back or to the side—she only moves forward. She doesn't retreat. And that was a real 'Aha!' moment for me."

Once on set, Steinfeld says she felt as if she "won the lottery," working with Bridges and Damon. "There was never a time where they made me feel intimidated; they were always helpful," she notes. Of the Coens, she says, "They were always making sure to check if I had questions, wanting to make sure I was comfortable with what I was doing. There were a couple scenes that I wouldn't say were difficult, but challenging. And they were always there to guide me through them." Steinfeld adds that she loved her time in Mattie's skin, that it was a fun role to play. Asked if she has anything in common with her character, Steinfeld replies, "We will both stop at nothing to get what we want."

Steinfeld is about to leave Los Angeles, where "True Grit" posters and billboards seem to be on every block, to catch a flight to Europe to do press. The word she uses to describe this time before the film's release is "surreal." She is reading scripts and trying to decide her next move. "Obviously, this has opened a lot of doors for me, and I'm excited to see what's next," she enthuses. She was able to see a final cut of the film recently and says the experience was overwhelming. "We just all broke down—my family, my representatives, everyone," she admits. "It's a lot to take in."

Asked which she's more excited about this month—her birthday or the film's release—and Steinfeld answers like a pro. "Oh, that's a tough one," she says with a laugh. "What if I said the movie, because it's my birthday present?"

-Her uncle is the bodybuilder Jake Steinfeld, of the "Body by Jake" fitness line.