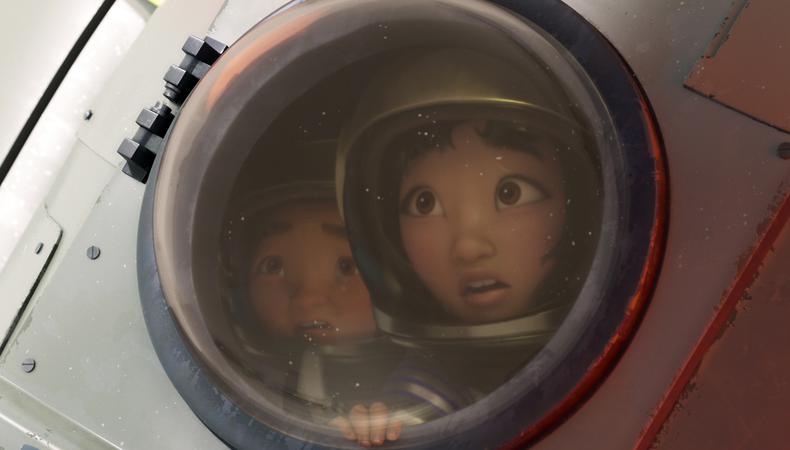 Glen Keane was instrumental in what’s now known as the Disney animation renaissance, animating such classic tales as “The Little Mermaid,” “Beauty and the Beast,” “Aladdin,” and “Pocahontas,” to name a few. But with “Over the Moon,” hitting Netflix Oct. 23, he was given the reins as a feature director for the first time.

Since this was your first time directing a feature, what was it like to have that kind of front-to-back control of the project?
I had been taught by what Walt Disney calls his “Nine Old Men.” He really trusted his key creative people to take sections of the movie and, in effect, direct them. They were called directing animators. I was taught by them, and throughout my entire career there—nearly 40 years at Disney—that’s the way I would approach it: taking sequences and working the story and the animation and so many of the different elements of recording. I was familiar with that, but I never had to really deal with constructing from beginning to end, with being responsible for building the whole team. I found I really needed that guidance from my producer, Gennie Rim.

Why did you feel strongly about “Over the Moon” being your feature directorial debut?
There are certain things I feel very comfortable with. The No. 1 thing for me is to identify with the character. That was the first prerequisite for me to direct it, saying yes to: Do I believe in this character? Can I live in her skin? Do I really get her? And Fei Fei [made me feel] like, Wow, I want to animate her. It felt like Ariel in “The Little Mermaid” for me. I knew this character from the moment I started reading her. I think I’m just a very optimistic person who tends to believe the impossible is possible. I really related to that. You dive into the thing that you’re most familiar with, and that’s drawing for me. You lead from the place of your own strength, and you pull in people around you who make up for those many areas that you lack. I just had the best team possible, really put together by Gennie.

Voiceover 101: How to Become a Voice Actor

What was it like putting together this entirely Asian cast of voice actors?
The most important voice that we had to know was Fei Fei’s. You are in her skin. If you’re going on a ride at Disneyland, she’s the cart that you hop in. You’re gonna go through the ride from her point of view. Gennie had worked with Cathy Ang on a short film called “Age of Sail,” and they needed an English voice that could sing. It turned out that Cathy Ang did a great English accent and she could sing. One night in New York, Gennie introduced me to her. I didn’t realize it, but Gennie’s thought was, This is going to be the voice of Fei Fei—but she didn’t say that to me. So I was talking to Cathy and, suddenly, it just dawned on me that I felt like I was talking to Fei Fei. It was in her eyes, this joy, this sparkle. It turned out her singing voice was phenomenal. And the fact that she was Chinese-Filipino, every box was checked. The same thing happened with Phillipa Soo, and adding John Cho and Sandra Oh was an amazing connection.

The little kid who was our Chin [Robert G. Chiu], he walked in one day—I just could not find any voice that really lived up to the superpowers that Chin believes he has, because it has to kind of be bursting out of your pores. This little kid came in, eight years old, looked like Chin, acted like him. There are these gifts that, when they happen, you just cannot believe it. I really do believe the very best things in life are gifts. You work as hard as you can, but in the end, there they are, and you just have the good fortune to pick them up.

Are you frequently inspired by voice actors? Do you find yourself animating in response to their performances?
If you talk on the phone to somebody and you’ve never seen them—I’ve never seen you, but I have a picture of a face in my mind right now, talking to you. It’s a vague form, but there are certain things that I hear in a voice that describe a certain attitude and facial structure. We just do that. Even color of hair and all that. In picking the voice, you’re looking for that harmony of the character that you’ve been figuring out a design for but have not quite yet. And then you hear the voice, and they come together. It’s a weird thing. There’s the voice. You might have heard 100 different voices until that one speaks out.

READ: Everything You Need to Know
About Working in Voiceover

What about animation as a storytelling form continues to excite and inspire you?
It always starts with the character, and what’s weird is I believe that the character exists before you design them, which is a really strange thing. There’s the design; they are suddenly staring back at you, and you recognize them. That’s my point of entry into directing. I was very familiar and confident with the approach to animating from the inside out, and that’s how we approached storyboarding as well—allowing a lot of freedom for characters to develop naturally. It may be written on the page one way, but storyboarding is always taking a script and storyboarding between the lines. It’s never the lines themselves; it’s something to discover underneath…. I find that the best ideas may not come from the people that you expect. It may be the new assistant who just started that day. You ask them, “What did you think about this?” And they’re sort of shocked that you’re asking them, but it’s part of what I’m saying in that the best things are a gift, and you’ve got to be open for them to come from any direction. That was my approach for directing this movie.

What advice would you give someone who wants to pursue animation?
My thought about animation is that what it really requires is for you to be you. There’s a tendency, I think, for animators to imitate something they’ve seen before. But what I was taught was that the key to animation is sincerity, which is really believing in what you are animating. More than anything, the skill you’ve got to develop is observation. Looking at the world around you, taking the people in your life—it could be your family, it could be people you know, [it] could be bringing a sketchbook with you, as I do, everywhere you go—and drawing, constantly observing, noticing something. The way a woman may be holding her baby on her hip and not even thinking about it, the way she holds them—you know there’s love there, and there’s a moment coming somewhere in your animation where you’re going to need that little bit of truth to put into your work. It’s observing the world around you and finding a way to bring that into your work. People identify with it. That’s been the key for me throughout my whole career.

Casey Mink
Casey Mink is the senior staff writer at Backstage. When she's not writing about television, film, or theater, she is definitely somewhere watching it.
END_OF_DOCUMENT_TOKEN_TO_BE_REPLACED