Hello, My Name Is Billy 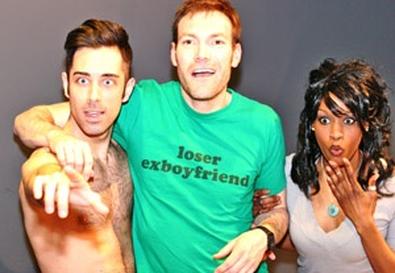 Occasionally, courage and curiosity can drive one to attend hole-in-the-wall theaters in the hopes of finding a smart and funny new show. The effort rarely pays off, but for every five shows that require you to flee during intermission, there's a tiny gem like "Hello, My Name Is Billy," playing Saturday nights at the Duplex.

A rocking new musical about Kansas boy Billy (Casey McClellan) and his twin addictions to drugs and sex, "Hello, My Name Is Billy" is the kind of wincingly accurate and familiar show that feels as if someone has been listening to your phone conversations and then exaggerating the stories you tell into song. The details—from Billy's increasing interest in drugs and partying at the expense of his college career to the nice guys who find Billy appealingly damaged instead of a sloppy addict—are dead on, and the sense of humor that writers Tim Aumiller and Scott Schneider have layered into their script keep the show from sliding into bathos.

And boy, can that cast sing! Everyone but McClellan also contributes an instrument (even if that instrument is simply a bottle of pills), and the sound is improbably lush given the cramped stage. As Billy recounts his story through the course of several 12-step meetings, we're treated to a wide-ranging cast of characters, from the older co-worker who takes his virginity (Aaron Kliner, who also plays Billy's father) to his imposing and sexy college best friend (played to perfection by the big-voiced Tush) and his introduction to New York City nightlife by Scott (a hilariously campy Robert Maril).

But the show deservedly belongs to McClellan, who brings a sense of boyish innocence to the role that balances out his habit of discovering new rock bottoms to hit. Not until the end of the show, which features a not-so-happily-ever-after epilogue, do things get as sloppy as Billy at gay club the Roxy. Billy's friends stage an "intervention," informing him that he was more fun when he was using. What's a good-time guy to do but take a hit? Suddenly, Billy goes from the guy you root for to the messy friend you stop inviting to your parties. Still, for most of the show's 90 minutes, there's no other addict in the West Village with whom we'd rather be spending the evening.