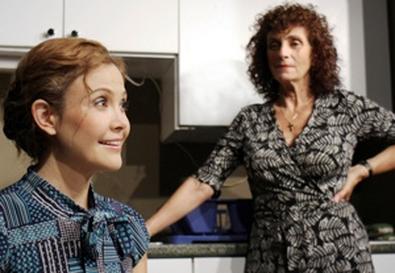 Photo Source: Jose Element
With enough material for a dozen plays, John Pollono's "Lost and Found" is an Italian stew, with moments both touching and volatile. Through gritty dialogue, the play is a testament to the vagaries of love and regrets for the might-have-been.

Boston matriarch Eva Broncato (a fiery Geraldine Librandi) is a widow with two children, Tommy and Marie. When Eva's love child, Vincent, appears, he sparks layers of guilt, remorse, and acceptance. Vincent, who's gay, shows up with his lover; Marie is sleeping with the goofy Keith; Tommy's bedmate is the wife of a next-door neighbor; and Eva conjures her one-time lover.

Recalling but less rich than such works as "Death of a Salesman" (it also has a fantasy scene and a car crash), "Lost and Found" is an insular domestic drama with impassioned confrontations. Though the characterizations are animated and well-drawn, and Andrew Block's direction is fervent, it lacks overall focus and a through-line the audience can care about.