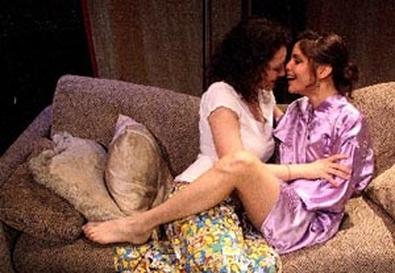 Photo Source: Nikolitsa Boutieros
Nylon Fusion Collective is a young company comprising two core groups of artists, one in London and one in NYC. As part of its Trans-Atlantic Fusion series, it is offering two shows in rep about people's need for recognition. I could only get to one of them, Alicia Silver's "Paper Dragon" (the Brits are presenting Elliot Joseph's "Wisdom of Obscurity"), but it didn't take long for me to recognize that these are talented folks. If Silver's comedy-drama about the social dynamics of a group of 20-something friends living in Manhattan's Chelsea district needs, as one character in the play puts it, "to think less character and more plot," there are still plenty of pleasures to be sampled.

Silver says in a program note that her play was inspired by an article about space garbage telling of the dangers of the considerable debris orbiting the Earth. She inventively applied the idea to "a group of friends...floating around, hitting each other—possibly destroying each other with tiny bits of themselves." Silver starts with the three Jewish Lamb siblings: Ronnie, a lesbian hairdresser; Walter, who sits around their joint apartment waiting for a broken leg to heal; and Andy, who we quickly learn is a ghost, having succumbed recently to cancer. Then Silver brings in Jesse, Andy's grieving girlfriend; Eleanor, Ronnie's best friend, an underachiever with a master's degree who is working as a waitress and also lives in the apartment; Jayson Reese, a Wall Street type dating Eleanor who always uses his full name when announcing himself; Bot, Ronnie's drop-dead-gorgeous Asian passing fancy who is temporarily living in the apartment because the woman she really loves is in a green-card marriage with a gay man; and Bobby, Bot's gay best friend who loves to dress her up.

As the characters interact, we discover that Bot is jealous of Eleanor, who may be in love with Ronnie, and Walter is hung up on Jesse, who is also attracted to him but conflicted about it. Andy appears to be haunting Walter, showing up in his dreams and delivering monologues to us about things like his love of Christmas or reminiscing with Walter about a trip they took down the Yangtze River in China. Ronnie has commitment issues, Jayson spars politically with Walter and wants to domesticate Eleanor, and the fabulous Bobby is worried about losing his best friend because Bot's lover is in danger of being deported. The title comes from a complicated origami creation of Andy's, his crowning achievement, one that so confounded him during its making that he chose to burn it when completed and then gave up the art altogether, saying that it was because "no crease could be uncreased."

Under Lori Kee's astute direction, the talented cast provides adept character portraits. Caroline Bloom's enigmatic Ronnie is the calm center of the swirling storm. Justin Maruri makes Walter an intriguing mix of quiet maturity and adolescent self-pity and is particularly convincing in his yearning love for Meghan Jones' touchingly insecure Jesse. Ivette Dumeng's brightly heedless Eleanor takes what she wants while casually toying with the emotions of those around her. Jacob Troy is an amusingly smug alpha-male Jayson, Jennifer Betit Yen creates a feisty good-time-girl Bot, and Kevin Melendez is both queeny and butch as the style-obsessed Bobby. Joseph Schommer struggles a bit with Andy's somewhat precious monologues, but the actor comes into his own when he finally gets to play a scene that Walter fantasizes.

Silver's resolutions of the characters' various dilemmas are happily open-ended, as in life. If "Paper Dragon" has trouble connecting its dots and ultimately feels more like a series of character sketches than a satisfyingly complete play, it still marks her as a writer to watch.