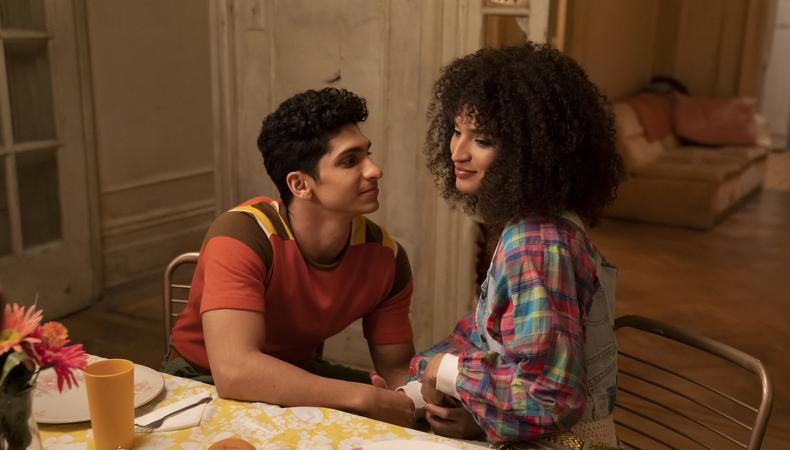 The following Career Dispatches essay was written by Angel Bismark Curiel, who can currently be seen starring on FX’s “Pose” as Lil Papi.

When I was in high school, I skipped class because I was bored. I only went to school out of obligation and stayed to crack jokes with my boys and flirt with girls. Those were my singular interests. As a Dominican-American kid walking the streets of Liberty City, I was unsure of where I fit in. I relied on humor to find a place. I made others laugh to be liked. I was the cute court jester. If everyone around me was laughing, no one paid attention to my insecurities, my struggles. It was the perfect distraction. I guess most of us play some kind of role to survive.

It wasn’t until I got caught ditching class in my sophomore year that I began to assume a different role. In the hall, I was met by my former English teacher, Ms. Perkins, who supervised the drama department. Listen: Perkins and I didn’t get along. We butted heads so hard because my humor, my big personality, and my energetic spirit was disruptive in her class. That day, she gave me two options for cutting class: the principal’s office or her classroom.

When I entered her classroom, there were about a dozen girls seated, eager to read Tennessee Williams’ “Rose Tattoo.” She handed me a play and assigned me the role of Alvaro Mangiacavallo, the leading man. I sat next to a girl I had a crush on. To be honest, I thought I was being rewarded for my truancy; it was the perfect opportunity for me to display my Dominican charm, my machismo swag. I knew I wasn’t the handsomest, but I knew what to say and how to say it.

I can’t remember any of Alvaro’s lines or my exact delivery of them, but I remember the sound of the girls giggling, the warmth of their smiles, the glisten of their eyes. They were eating up my line readings, enjoying spending time with my character—and with me. I didn’t know then that I needed their praise, their affirmation; they made me feel loved, even if it was under the guise of Alvaro.

After that reading, Perkins suggested that I audition for the play. I enjoyed being around those girls and the affirmation they gave me so much that I didn’t only audition—I joined the drama department. I had found my passion for performance as a young person, a gift that Perkins’ insight and intervention provided for me. Unknowingly, this would be the launch of my career as an actor and an artist.

School may seem like it’s about what you ought to know—the things you memorize and forget as soon as you take an exam or pass a test. But really, school is your opportunity to figure out what you love, who you are, what you want to be and become. It’s about what you want to know. Good teachers like Perkins push you by helping you lean in even further into who you already are. They give you something of interest, recognizing something in you before you can see it yourself. She encouraged my rambunctiousness, my comedic timing, my desire to be the center of attention through drama.

Landing a small role in that show gave me a reason to show up to school. Now, if I wanted to compete in drama competitions, I needed good grades to do so. So I showed up every day. I stayed in all my classes. I went to tutoring after school. I became a thespian and a harder working, more productive student and person.

I was also introduced to a group of kids so outside of what I thought was “cool” at the time. Many would call them outcasts for simply being themselves. They were unapologetically different. They taught me to stop playing a role and to just be myself, which made me a better actor because the self is your internal compass. It’s what enables you to embody other selves. No longer did I have to play the role of the charming, fast-talking, hardened, street kid constrained by the dictates of hyper-masculinity. My peers in the drama department gave me the space to be vulnerable, and that vulnerability pushed me to question the disease that is toxic masculinity that so many young men like myself suffer from. I am forever grateful for their friendship and their leadership as we embarked on school productions of Shakespeare’s “A Midsummer Night’s Dream” and Stephen Adly Guirgis’ “Jesus Hopped the A Train.”

As we prepared to say goodbye, Perkins asked me what I planned to do after graduation. I told her I would join the army, the only viable option for me. In her stern-yet-loving way, Perkins said, “Angel, you will do more good in this life with a script in your hand than a rifle.” With her encouragement, I applied to study drama at Pace University, moved to New York City after graduation, and dropped out three years later after landing a role as a series regular on the FX drama series, “Pose.”

I still can’t believe that I get to wake up every day and play Lil Papi, a young Dominican orphan who is unafraid of showing his humor and his heart. I feel purposeful playing a supporting role to the most extraordinary, revolutionary leading actors, Indya Moore and MJ Rodriguez. I do my absolute best every day to represent young black and brown men in a rare, positive light—showing their humanity, their complexity, their wholeness. And I’m challenged every day by our showrunner Ryan Murphy to inhabit my inner leading man.

So to my younger self struggling to figure out who you are and where you fit, I would encourage you to be patient with yourself, to explore what you love, and to hold tight to the gifts you have. The things that you get punished for doing, like holding court in the middle of a class, can become your very path. I also encourage you to listen to those around you. It’s funny to me how Perkins, with whom I butted heads, was the very advocate and champion I needed.

So go out and find your Perkins—she can be the bridge between you and your purpose.