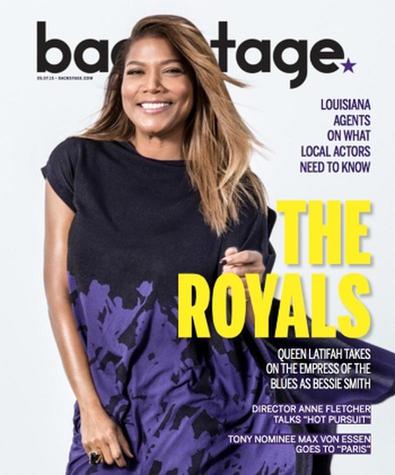 In the early 1990s, Dana Owens was immersed in a hip-hop career—we know her better by her stage name, Queen Latifah—that had already produced a couple of strong albums and radio hits like “Ladies First.” But Latifah didn’t want to stop there, envisioning a future as an actor after appearing in Spike Lee’s “Jungle Fever” and her pal Will Smith’s sitcom “The Fresh Prince of Bel-Air.” The bold aspirations stemmed from a New Jersey childhood where she was encouraged to dream big.

“My mother always raised me to never put all my eggs in one basket,” she says after finishing a photo shoot at Hollywood’s Siren Studios in late March. “I’ve always done a lot of things throughout my life. Even in high school, I played basketball, then I’m rapping under the bleachers, and then I’m in student government. Hanging out in New York City, I’ve always had a lot of different parts of who I am that need to be lived. I’ve never been able to stay in one thing. I have to be challenged in different ways.”

Her most significant acting role emerged during that early-’90s period, but it’s only now come to fruition. She plays the legendary (and legendarily troubled) Jazz Age singer Bessie Smith in the HBO film “Bessie,” which airs May 16. A biopic that spans years of Smith’s life, chronicling her romantic miseries, alcoholism, and career pitfalls—she was affected by racism and the Great Depression but also brought much of her hardship upon herself—“Bessie” finds Latifah capturing this soulful, struggling, larger-than-life figure. The project has been part of Latifah’s life ever since producers Richard and Lili Fini Zanuck approached her when she was only 22.

“Initially, this movie was set up at a big studio with, like, a $30 million budget,” says Latifah as she relaxes on a sunny rooftop. “Big production company, a big director.” The project fell through, but the Zanucks believed in the film and believed that she was right for the role. What did the producers see in the young rapper and aspiring actor that made them confident she had what it took to play Smith? Even Latifah isn’t entirely sure. “I think they just saw something in me that reminded them of Bessie, made them think that this was the girl to play this role,” she responds. “The power that I brought across and the barriers I had to break down as a female rapper may have been similar in some ways to some of the barriers Bessie had to break down. We did a really interesting audition, a long audition. I had to sing the songs and act—I had to earn the part.”

By Latifah’s count, the script went through at least five writers, and Latifah and her longtime creative partner, Shakim Compere, eventually came on as executive producers. But as the biopic gained and lost momentum over time, Latifah went about cultivating a career that represented her restless spirit. Talk show host, CoverGirl model, Grammy-winning musician (she’s also recorded a few jazz vocal albums), Oscar-nominated movie star; she’s one of a handful of hip-hop artists from the late ’80s who has gone on to be a multimedia threat, her immensely likable, confident personality the one element that connects all her endeavors.

Face to face, Latifah is just as friendly as she appears but is also focused, answering every question with purpose. Even early in her life, Latifah thought like a businesswoman, spending time backstage with Compere during her tours strategizing her next step. “I would be on the road with Will [Smith] and [Ice] Cube and [Tupac Shakur]—we all kind of grew up together on the road touring,” she recalls. “And when Will did [‘Fresh Prince’], I was, like, ‘Well, if Will can do it, I can do it.’ He was our inspiration, because we knew it was possible.”

Referring to herself and her fellow hip-hop artists-turned-actors, Latifah explains, “We were young entrepreneurs—we were used to creating things for ourselves. I wasn’t expecting people to have what was right for me, because they just wouldn’t. They wouldn’t see me as an A-list actor, this young black woman from North New Jersey, who was not a size 2—more like a size 10 at the time. [I didn’t have] long, flowy hair all the way down my back and light eyes and whatever comes along with those archaic ideas of typical beauty. Growing up in New York, you see the dynamic of beauty with so many different cultures and people—that’s always been normal—so [my attitude] was, ‘How do I get them to see [me] as what’s right?’ ” 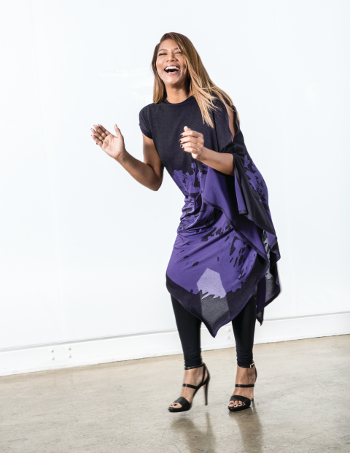 Thankfully, hip-hop provided a way to get her face out there in the world, the budding industry serving as a proving ground for the demands of acting. “The school of hip-hop is very competitive,” she says, “so you have to compete on a high level just to succeed. This was a budding form of music, so we had to drive our ideas across through our music videos. Performance was important.”

Busy juggling different aspects of her career, Latifah didn’t spend every minute of the last 20 years thinking about Bessie Smith, but as time passed, she recognized certain parallels to her own life—almost as if the role was waiting for her to get old enough to portray Smith properly. “I’ve experienced racism, I’ve experienced sexism, I’ve experienced loss in my love life,” she says. “I’ve experienced adventurous things in my love life. I know what it is to let people down, to have to ingratiate yourself and kind of humble yourself. To drink yourself to sleep because you’re in pain, I know what that is. I don’t know if I knew all that at 22, but I definitely know it now.”

After years of waiting, “Bessie” finally came together in quick fashion, with Dee Rees, the heralded indie filmmaker behind the 2011 Sundance hit “Pariah,” sitting in the directing chair. “You can’t [portray] Bessie and not be free,” Rees says by email. “I think that Queen Latifah, like Bessie, possesses a sort of freedom of heart that allowed her to channel Bessie’s energy and vibrate with her persona in an interesting way. I also think that Bessie was a very complicated, unknowable, and sometimes misunderstood person who didn’t always let people completely in, and I think they are kindred spirits in that regard.”

Indeed, that’s one of the best aspects of “Bessie”: Latifah, who prefers keeping her personal life private, brings her own impressive vocal range to Smith’s songs, but it’s the character’s enigmatic nature that’s more alluring. Engaged in a tumultuous lesbian romance and then falling into unhealthy heterosexual relationships, the Smith we see in the film remains just out of reach, the pain of her vocal performances hinting at depths she won’t reveal otherwise.

“Bessie wore my ass out, frankly,” Latifah admits with a laugh. “God bless her energy to do what she did—I was tired from [having] a husband, a boyfriend, and a girlfriend. I was happy to release this character and go back to a normal life after we were done.”

Now that “Bessie” is finally a reality, Latifah is thinking about upcoming projects. And despite two stints as a daytime talk-show host, she hasn’t ruled out a third stab at the gig. “I’m starting to get really good at it,” Latifah says—then adds, laughing, “I think maybe every 10 years or so I’ll do a talk show for a couple years.” Like her other aspirations as a child, going into broadcasting had been something that caught her fancy at a young age. She says she loved doing field pieces for her show, but also felt she developed a voice as an interviewer.

“I loved it,” she says about the show’s sit-down segments with her famous guests. “It was very difficult because I know a lot of them—I’m a celebrity as well. I have a private life just like they do. So it was really trying to find a line of being curious and asking more questions, but never violating their space. To make sure they felt safe and comfortable in my house. I felt like that was accomplished. A lot of people want to go for the salacious all the time, [but] you miss so many things about that person because you’re so interested in who they’re having sex with, which is really none of your business. You know, I don’t care what you’re doing in your bedroom. Like, more power to you, I hope it was a good night—I mean, I’m curious like anyone else, but not to the point of invasive.”

Right now, though, she’s continuing to dream. She doesn’t want to lose that drive—or that anxiety. “Every time I put out a record, I feel like a new artist,” she says. “I’ve always approached things with hunger and just enough fear. Plenty of confidence, you know, but just enough fear to work extra hard. Paralyzing fear does nothing, but the kind of fear that makes you nervous enough to really be aware and focused? I like that kind of fear. It’s the same fear I feel on a motorcycle. It’s not enough to paralyze me—if anything it makes me more focused, more aware, more heightened. And I ride hard.”