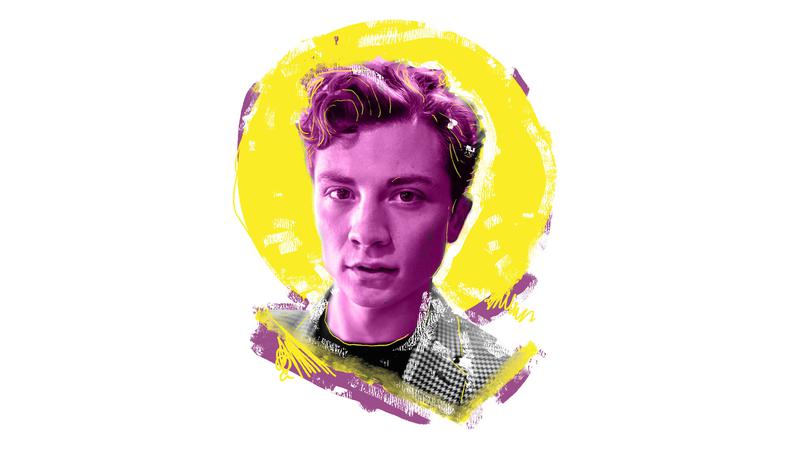 While childhood aspirations drove Richard Ellis to take up guitar, drums, bass, and piano, acting drove him to commute from Connecticut to Manhattan to take classes. After a handful of minor roles on the East Coast, Ellis relocated to Los Angeles, secured an agent, and will soon be seen as Brad Lewis on Netflix’s “I Am Not Okay With This,” the series based on the graphic novel of the same name. Here, he shares his first on-set faux pas and why he goes above and beyond in auditions.

What was the moment you decided you wanted to be an actor?
As a kid, I always loved music first; I started playing piano when I was 8 and I always wanted to be a singer. I ended up learning four instruments: guitar, drums, bass, piano. I thought that was the route I was going to go. In high school, I was in this pop-punk band and we would play shows all over Connecticut. I had that thing every kid in that area goes through, where I was like, Alright I should probably get a normal job. So I went to the University of Connecticut and was a kinesiology major, which is physical therapy. My junior year, I was like, “I want to drop out and be an actor.” My mom was like, “Why don’t you pump the brakes and try a class?” I did that in the spring semester of my junior year—I was commuting from Connecticut to New York City every Sunday to take an intro-level acting class. I ended up moving to Manhattan, and after a year of that, I ended up in L.A. It’s been a wacky journey.

How did you land your first agent?
Everybody always talks about extra work negatively, but for me, I was so inexperienced [that] I had to figure out how a set worked, what a show looked like, what they do on a set. I was an extra on a series and I ended up befriending one of the series regulars who was around my age, and he could tell I took it seriously. We struck up a friendship and he actually told me to move to L.A. [so he could] show me around. From there, he referred me to a couple of people—that’s how I got my agent.

What advice would you give your younger self?
Stop caring what people think. I think the second I [let go] of other people’s opinions of me is when I started to take off. I would live my life through the lens of other people, and that held me back. I was like, “Well, people will think it’s weird if I want to act, and that’s not cool and I want to be cool and being cool is important.” The second you understand who you are, you can live life as you truly are and you will always be happy. It doesn't matter what anybody thinks of you.

How did you first get your SAG-AFTRA card?
I became SAG-eligible through the background work, but for my SAG card, I did this indie horror movie in Michigan, and it was the first time I got flown out for anything. They were like, “You have to join SAG if you want to do this.” That was when I pulled the trigger. That was almost two years ago.

Tell us about your first day on a professional set.
Luckily, by the time I had booked a role where I was actually speaking, I understood the ways of a set. My first day of extra work, I had just moved to New York. Backstage was the thing I used all the time, Backstage is where I got my start on everything. [Backstage is where I got] my first extra gig, on “Divorce,” the HBO series. I remember being confirmed for it and calling my mom and going, “Ma, I told you I’d make it,” equally pumped and naive. I remember they called lunch, and I didn’t know there was a hierarchy of who gets lunch first. I nonchalantly went to the front of the line. I should’ve known something was up when it was me and Thomas Haden Church loading our plates up with salmon and none of the other extras were up there with me. [But] I just shrugged it off. And then, all of a sudden, I got physically yanked by one of the PAs—my plate was full of expensive food, I did not hold back at all. He was like, “What the hell are you doing? You’re not supposed to be here.” I said, “You said lunch, so I’m getting lunch. What’s the problem?” [He said,] “No, you guys get it last; you have to wait. Never do this again or you’ll never work again.” I was ashamed of myself the rest of the day. I thought I was going to get blacklisted for that.

In a similar vein, what is your worst audition horror story?
Fortunately for me, I’ve never had a full-on train wreck. I remember the first professional [audition] I went out on, I literally felt like I was outside of my body. I could tell every single line I was doing was monotone. I didn’t know where I was. I basically blacked it out. I remember walking out [knowing] that it sucked. A lot of it was some early student stuff where I was told in some class that it was OK to not know your lines, so I was reading off a piece of paper essentially thinking that was totally cool.

READ: With ‘Motherless Brooklyn,’ Edward Norton Plays by His Own Rules

What performance should every actor see and why?
Edward Norton in “Primal Fear” blew my mind: his ability to just completely embody two different people so believably, for someone who’s not the most physically imposing to be able to scare the crap out of you with his eye contact when he would switch over. And then to quickly go back to someone who’s so unassuming. That was one of the movies that made me go, “I would love to try that,” and wonder what it’s like to go into those areas of your brain that you would never have any reason to explore in your real life. Any movie with a psychological twist to it, you have this free rein to explore areas of your mind you wouldn’t in real life.