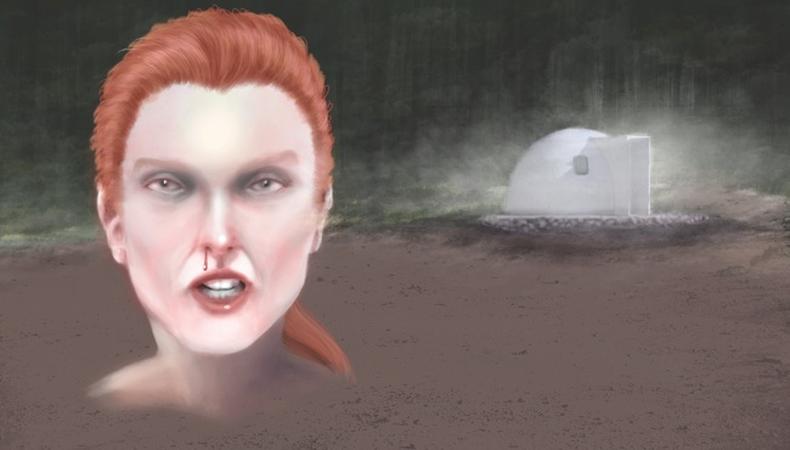 One of the creakiest critical clichés is to salute an actor for “disappearing” into her role. Beyond being overused, this cliché is ridiculous because it suggests that a certain kind of great performance can be gauged by the fact that we don’t notice the actor’s personality in the portrayal. The problem with such praise is that it tends to be doled out to larger-than-life actors who, for a change, decide to rein themselves in, as if restraint is some incredibly challenging undertaking that only the bravest can endure.

Julianne Moore disappears into her role as Carol White in “Safe,” but it’s a different type of disappearing act, a better one. And it’s perfectly in keeping with the character she plays, a woman convinced she’s fatally allergic to the 20th century.

Set in the San Fernando Valley in 1987, writer-director Todd Haynes’ 1995 film is part psychological horror movie and part social commentary. When it was made, Moore was just beginning to become the celebrated actor who would go on to be nominated for four Academy Awards. Graduating from daytime television and bit parts in forgotten studio movies, Moore had impressed in back-to-back independent films, Robert Altman’s “Short Cuts” and Louis Malle’s “Vanya on 42nd Street.” But “Safe” was her most adventurous role to that point, portraying a seemingly typical Valley housewife who falls out of alignment with her enviable life of the nice house, businessman husband, and lengthy lunches with friends. She starts feeling lethargic…then it’s trouble breathing…then it’s bloody noses. Her doctor says she’s fine, but inside she doesn’t feel that way. And it’s only getting worse.

“Safe” can be seen as a barbed response to our paranoia about the latest societal scare. (The movie came out at a time when premillennial anxiety was just about to rev up, but its late-’80s setting places it in the AIDS era. Seen today, “Safe” plays like a disturbingly prescient take on post-9/11 terrorism fears.) But Haynes, who would go on to make “Far From Heaven” and “I’m Not There,” fiendishly refuses to nail down what is making Carol sick—or even if her illness is real or self-invented. The movie’s mystery isn’t what exactly is happening to Carol but why it’s happening, and Moore’s precise performance is central to the film’s power.

For most viewers, Moore was a relative unknown, and so there wasn’t much baggage from previous roles influencing our vision of her as Carol. But even from our current vantage point, Moore is extraordinary at playing a woman who’s vanishing before our eyes. At first, it’s the way that Carol seems to be minimized by all those around her: her distracted husband, her rudely dismissive stepson, a society that only makes her feel comfortable at aerobics classes and on pointless errands. Once her illness starts to take hold and she begins investigating possible remedies—fruit diets, oxygen masks, food allergy treatments—it becomes clear that Carol isn’t so much looking for a cure as she is searching for an identity, a way of being in a world from which she feels alienated.

Come Oscar season, we’re used to seeing actors dying of diseases in the name of awards, but Carol’s illness has a sting to it because its origins are unfathomable. (There’s not the comfort of a typical disease narrative because we don’t know where “Safe” is going or how bad it might get.) Moore plays Carol as an innocent, well-meaning woman without a backbone or a sense of self. These are not characters that some actors like to play: They’re weak, indecisive, and potentially exasperating. Carol is all three, but Moore makes her enormously sympathetic anyway. Part of this is due to Haynes’ nonjudgmental view of the character, but much of the credit must go to Moore, who radiates such warmth that we always sense that a sweet, decent woman is there inside Carol, except she’s so consumed with finding contentment through alternative medicines and self-help gurus that she never had the confidence to find herself.

As meek as Carol is, Moore’s performance has a steeliness to its vulnerability. That sounds like a contradiction, but Moore makes it work—it’s hard to think of a movie in which a character so fiercely tries to keep her head above water while drowning at the same time. With her feeble, placid voice and somewhat vapid observations, Carol is a pretty nobody, and Moore never tries to make her anything more than anonymous. That’s why “Safe” is such a wrenching experience. In real life, Carol is the sort of unexceptional person whose suffering we’d never notice. By making her disappear so tragically, Moore ensures that Carol’s plight is unforgettable.

Tim Grierson is a film and music critic for Screen International, Paste, Deadspin, and Playboy. His new biography of the band Wilco, “Sunken Treasure,” is available now.