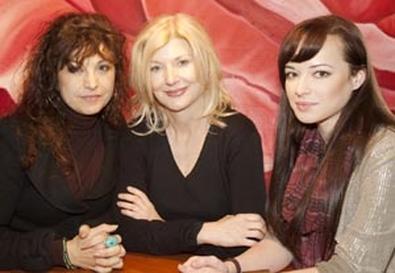 Photo Source: Shiloh Strong
For her feature film debut, "Fly Away," Janet Grillo chose to tell a story close to her heart.

As the mother of a teenage son with autism, Grillo had previously explored the developmental disorder as an executive producer of the Emmy-winning documentary "Autism: The Musical" and in the short film "Flying Lessons."

"Fly Away" premieres this weekend at the SXSW Film Festival before a multiplatform release in April, which happens to be Autism Awareness Month. But it would be a disservice to the film to imply it is merely a movie about autism.

The indie, shot on a shoestring budget in 14 days largely at Grillo's own home, tells the story of single mother Jeanne (Beth Broderick, best known for her seven seasons on "Sabrina, the Teenage Witch") coming to terms with the future of her severely autistic daughter, Mandy (Ashley Rickards of "One Tree Hill"). The film deals with universal themes between mothers and daughters, is told with humor and honesty, and features stellar performances from both female leads.

Grillo and Broderick first met in 2004 while both were volunteering for the Howard Dean campaign and became fast friends. As it turns out, they shared more than their choice in a presidential candidate in common; Broderick's sister Laura Broderick is one of the leading people in the United States working with adults with autism through her companies, Diverse Journeys and Get a Life.

Notes Broderick, "It was really beautiful experience for me to have my sister come and consult with us on the film. So that for one moment, our lives intertwined in such a really special way."

Back Stage sat down with Grillo, Broderick, and Rickards to discuss the fast-paced making of "Fly Away."

Back Stage: Janet, your short film "Flying Lessons" dealt with similar themes to "Fly Away"; was the intention always to make a feature?

Janet Grillo: "Flying Lessons" was about a woman with a son who was mildly impacted and it was just about getting through a day. It did the film festival circuit and did well and the first question was always invariably "Is this going to be a feature?" The parents of children on the spectrum were really expressing a desire to see this as a feature and I started to feel like I had a responsibility. I made a couple changes in the story: It's now a girl and she is a severely impacted person.

Back Stage: Why did you feel those changes were necessary?

Grillo: There are many reasons why I changed it, but one of the primary reasons is because one of the things that just really gets my goat is a lot of the Hollywood portraits of autism are of high-functioning or mildly impacted or "special gift" individuals. And I know why—because those people can express themselves, and so it is easy to dramatize and access. But the percentage of people with autism that have that level of functioning is really small, and the majority of the people in the spectrum are dealing with terrible struggles and I have seen the people who are truly heroic rising to these challenges. I felt that that was important to depict. When I sat down and I wrote this, I wrote it in like six weeks, it just poured out of me. And then went to Beth, who is also a brilliant writer and she started to give me great insights and ideas.

Beth Broderick: Oh yeah, I'd call her like every five days and be like, "Janet, I've been mulling." She's like, "Mulling? Not mulling. You haven't been mulling." I'm like, "Yes, I'm sorry to tell you that I've been mulling." But to her credit, this is Janet's first feature and many directors are very reluctant to take notes or to collaborate with actors. They can be very stubborn and afraid to be flexible and afraid to take input. And so every time I talked to Janet, I was so impressed because the script would come back and I would be like, "That's it! That's what I was trying to say." She really got it. She really nailed it every time.

Back Stage: Ashley, how did you land the role of Mandy?

Ashley Rickards: It was an audition situation. I've been into the casting director, Erin [Toner], for a bunch of different roles. I put myself on tape, and they emailed it to Janet and then things got really exciting.

Grillo: From my point of view, I feel that you were delivered to us, seriously. Because I sat with Erin and I described exactly what I believed we would find: This person would be a dedicated, talented actor, anti-diva, completely committed to the part, would look 14 or 15 years old, and would be 18 years old. So we just put it out there, and I said, "I know we will find this person." And then you know as soon as auditions and such and there were all these little starlets coming in flapping their hands around. And I was kind of looking at them sideways and wondering, "Could I make it work?" I felt I was going to have to be an acting teacher and an acting coach and all that. Then I went to New York to visit with my son, and I got this email with your audition.

Broderick: I remember you calling me and saying, "I just found her. I just saw her."

Grillo: I immediately started passing it around. And actually my son was with me, and I called him over and I said, "Matt, look at this. What do you think? Does she look autistic?" He said, "Yes. Cast her."

Grillo: But I had to meet you and feel that there was a good vibe between us. And I was just knocked out, because she walked into the room as Mandy. She was fully in character; she even had a little teddy bear. I like to talk to the actors first and just get a sense of them and put them at ease but I said nothing. And you just launched into it. And I was just watching. And then, while you were in character, I started to throw you questions, do you remember that?

Grillo: I just spoke to you as Mandy, for quite a while. It was at least 10 or 15 minutes. And I was just with Mandy. And then you came out of character, and the first question I asked was how old were you, and you said…

Back Stage: I'm so fascinated that you came to the audition in character, because that's a very bold choice. And it can work or it and go horribly wrong. How did you reach that decision?

Rickards: Well, it's definitely backfired on me in the past. I went in for a role one time where I was playing this really edgy girl who was just so immensely hurt by everything that happened in her past. I kind of came in with a little bit of an attitude, sort of angry, and it didn't go so well. So maybe I'll only do it if it's a nice person now. Here I felt it was necessary, because it's such a change going from Ashley to Mandy, it's a lot to ask, and to go start the scene in three seconds and make that shift was too tough.

Back Stage: Did you stay in character on set, as well?

Rickards: I never went fully out of character, but I would sort of tone it down during breaks and spend time texting and Facebooking. But there wasn't a lot of down time.

Grillo: It was sort of funny because I realized at a certain point that I wasn't giving you notes, that I was giving them to Beth as Mandy's mother. Because you're not going to give a note to an autistic person, and you weren't Ashley, you were Mandy.

Broderick: I have to say, I play a mother pretty much nonstop now, because you get to my age, that's what you are, you're a mother. And I work with a lot of young people, a lot of the young actresses, and this one is very special. She really was so amazing to work with, and if I do say so myself, Janet was very lucky to have no divas on set.

Grillo: Every time we screen the film someone asks, "How did you get an autistic person to act so well?" Which is the highest compliment to Ashley.

Back Stage: Beth, you're best known for comedy, though you've done plenty of drama, but do you feel you were cast against type here?

Broderick: The truth is, it's actually quite outside my wheelhouse. I'm a light comedienne, that's really where I live the most often. The other independent film I have coming out [titled "818"] is a crazy nutball comedy. I'm very comfortable in that zone. So for me to really strip it away, strip it away, strip it away was tough. Because I'm notorious for being on a job and going, "Hey, there's a joke here." And we did find some jokes. We found some humor in the movie. But it was a different style than what I normally work in.

Grillo: But I knew her depth as a person and I know her soulfulness and also I'd seen her stage work. She did a brilliant, dazzling job in a one-woman play written by Theresa Rebeck ["Bad Dates"] where there's a lot of dimension and went to a rather dark place, so I had no doubt whatsoever.

Back Stage: And for young women like Ashley, you probably don't have a lot of opportunities to play such a challenging role.

Rickards: No, they don't come around much. It was a dream to play it. I don't know when the next time I'll get to play a role this interesting will be.

Back Stage: Janet, you mentioned taking offense at certain portrayals of autism on screen. Was there anything you specifically wanted to avoid with this film?

Grillo: Absolutely. I think one of the final straws was I was at a dinner party and I was sitting next to this therapist and she said, "Oh, your child's autistic. What's his gift?" I really take umbrage to movies in which the disabled person is a magical character who brings learning to others around them and benefits them all. That's such BS. I think it does a disrespect and an injustice to our kids. We shouldn't be loving our children because of their gifts; we should be loving our children. We shouldn't be understanding and having compassion for people with autism because a few of them have splinter skills where they can memorize train tables. We should be accepting them because they're human beings. I believe that the measure of a healthy society is the way that we care for the least amongst us. So I wanted to be respectful to this community and this story. And tell the truth.

Back Stage: Out of curiosity, how did you respond to that person?

Grillo: I actually really had to take a breath and finally I said, "There's absolutely no gift. There is no advantage to autism; it's a disability that is only suffering. It doesn't benefit my child in any way; it just keeps him from being the person he wants to be. Thank you very much." And she kind of moved away from me. [Laughs.]

"Fly Away" is playing at the SXSW Film Festival March 13, 14, and 17. For a schedule of times and locations, visit schedule.sxsw.com.