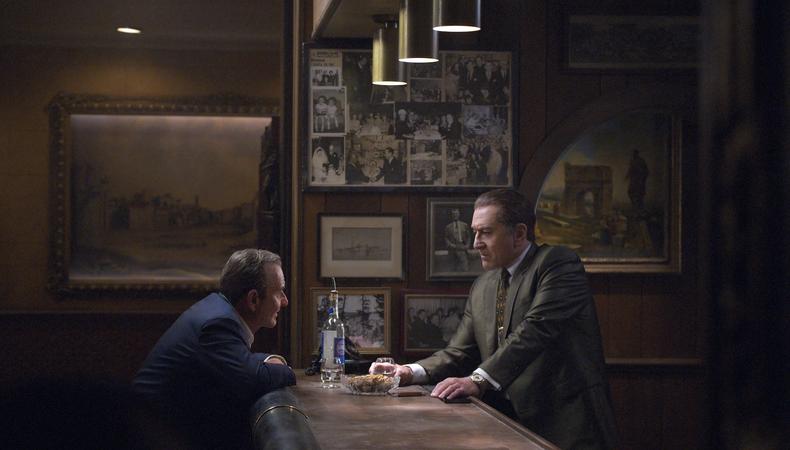 You likely don’t know producer Emma Tillinger Koskoff by name, but you definitely know her work: “The Irishman” and “Joker,” just to name two from this year. You also know her closest collaborator—and she calls him “Marty.” The producer extraordinaire discusses what it’s like to run Martin Scorsese’s production company, how they pulled off their exacting “Irishman” shoot, and how she works with actors: “I get out of their way,” she teases.

The role of producer is one of the most important in film, yet it’s still an elusive one. How would you describe what a producer actually does?
The producer’s primary role is to support the vision of the director. I’m a nuts and bolts, on-set producer.  I’m the first on set and the last to leave every day. I work with all of our department heads and make sure the day runs smoothly and that the director and actors can focus on their work without any distractions.

How did you get into producing?
My mother and father are both directors and actors. I grew up around film and theater, so you could say that filmmaking is in my DNA. I always knew that I wanted to go into the arts, and after graduating high school, I worked in several areas in the industry. I quickly realized that producing and working with directors was my passion.

What are the things that lure you to a project initially, that make you excited and make you decide to put your weight behind it?
What attracts me to the majority of my projects is that I get to work with one of the greatest filmmakers of all time, Martin Scorsese. I run his production company, Sikelia Productions, so I’m involved with all of the pictures he makes. It’s easy for me to get excited about producing Marty’s projects because he is endlessly curious and constantly challenging himself and our entire team to push boundaries and be ambitious. When it comes to projects we executive produce, it’s an honor and it’s absolutely thrilling to be able to support emerging filmmakers and other artists whose work we love.

READ: Why ‘The Irishman’ Has One of the Best Acting Ensembles of 2019

This year alone you’ve produced two of the year’s biggest films (and executive produced several others). How much does your job change from  project to project?
I run Marty’s production company, so I’m involved with his projects throughout the entire process. I’m here to support him with whatever he needs from pre-production through post-production. With “Joker,” I started working with [director] Todd Phillips after he had written the script with Scott Silver and was heading into pre-production. We worked together closely on assembling the crew, scouting locations, and the budget, and we continued to work together throughout the shooting process. On the projects I EP [which include “Uncut Gems”], it really varies from project to project. It could be helping with the crew, locations, a guild, or notes on a cut. Whatever it ends up being, it is all in service of supporting the filmmakers in any way they need.

Speaking to “The Irishman” specifically, was the production as extensive to put together as one might think?
“The Irishman” posed enormous logistical challenges. We had around 120 locations and 319 scenes, which we shot in 108 days. We’d often have multiple company moves in one day, with nine cameras, a huge crew, and a number of trucks. I’m fortunate to work with the best team in the business, which includes line producer Richard Baratta, UPM Carla Raij, Kip Myers for locations, and many others.

What is your relationship as a producer with actors on a given project?
When it comes to working with the actors, I let them know on the first day of production that I’m here for anything they need—and then I get out of their way. My job is to eliminate all the stresses and distractions that can happen during production so the actors can focus on their work with the director.

Do you have any advice for someone who wants to become a producer?
My advice would be to spend time on sets and get to know everyone’s roles in pre-production, production, and post-production. Your director is your No. 1 priority. You need to do everything you can to protect them and anticipate their needs. But you also have to know when you need to bring a problem to them. Get to know and love your crew and take the very best care of them. And always lead with humanity, compassion, and kindness.

Casey Mink
Casey Mink is the senior staff writer at Backstage. When she's not writing about television, film, or theater, she is definitely somewhere watching it.
END_OF_DOCUMENT_TOKEN_TO_BE_REPLACED