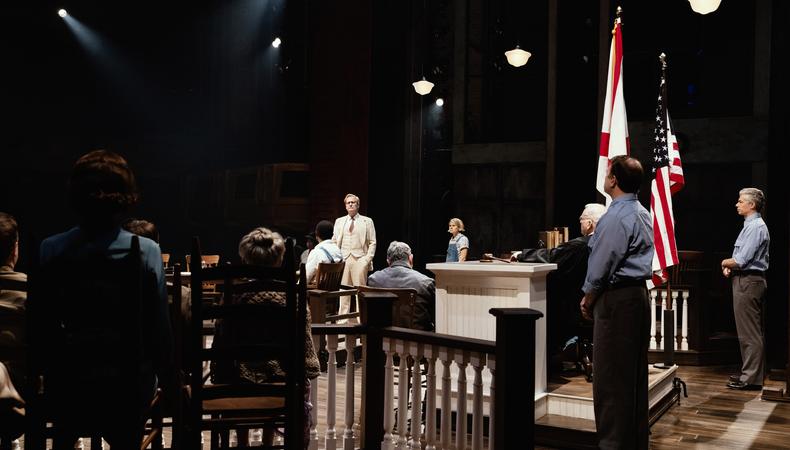 “Mockingbird” tour takes flight.
After some legal disputes that nearly intervened, the current Broadway production of Aaron Sorkin’s “To Kill a Mockingbird” has announced its first national tour. The epic will launch—fittingly—in the nation’s capital, beginning performances at the Kennedy Center in Washington, D.C. Aug. 25, where it will run through Sept. 27. A coast-to-coast tour is to follow, with additional cities and dates to be announced. No casting has been set at this time, though Bartlett Sher will direct the piece, as he did on Broadway.

She missed the mountains.
Also announced for the Kennedy Center’s upcoming season is a bit of match-made-in-heaven casting news. Rachel Bay Jones has signed on to lead an upcoming production of Pulitzer Prize–winning “Next to Normal.” The Tony Award winner will take on the role of Diana (which also earned original star Alice Ripley her own Tony Award), in a brief stint Jan. 29–Feb. 2, 2020. Additional casting for the Tom Kitt and Brian Yorkey musical is to come.

A very decent cast.
Casting is in place for the Los Angeles and Boston premieres of “Indecent,” Paula Vogel’s Tony and Pulitzer-nominated drama, which ran on Broadway in 2017. Most of the original actors will reprise their roles, including Adina Verson, Richard Topol, and Mimi Liever. New to the cast will be Elizabeth A. Davis, stepping into the track originated by Katrina Lenk. (In an ironic twist, Davis was Tony-nominated for her role in Broadway’s “Once,” and was then replaced by Lenk when she departed that show.) Helmed again by its Tony-winning director Rebecca Taichman, “Indecent’ will run in Boston April 26–May 25, and then at the Ahmanson Theatre in L.A. June 5–July 7.

Dove Cameron ups the octave.
Cameron, who recently made her New York stage debut leading the “Clueless” musical Off-Broadway, is gearing up for another milestone. The former Disney star will make her L.A. opera debut leading “The Light in the Piazza,” opposite esteemed opera star and Tony nominee Renée Fleming. The Adam Guettel production will run Oct. 10–20 at the Dorothy Chandler Pavilion, under the direction of Daniel Evans.

Six is the charm.
File this under: Keep it on your radar. Casting has been announced for the North American premiere of “Six,” the new West End musical that is currently nominated for five Olivier Awards. Leading the run at Chicago Shakespeare Theater will be Broadway mainstays Abby Mueller, Adriana Hicks, Andrea Mcasaet, Brittney Mack, Anna Uzele, and others. Running May 14–June 30, the “pop-concert spectacle” comes courtesy of Toby Marlow and Lucy Moss, and depicts the six ex-wives of King Henry VIII.

Want more theater news? We have it right here!

Casey Mink
Casey Mink is the senior staff writer at Backstage. When she's not writing about television, film, or theater, she is definitely somewhere watching it.
END_OF_DOCUMENT_TOKEN_TO_BE_REPLACED