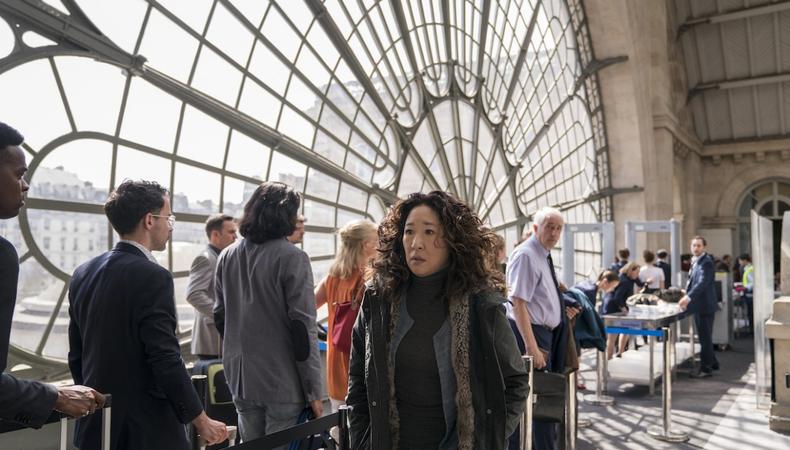 As summer approaches, so does the season of handing out accolades to television’s best—although celebrating excellence on the small screen feels like a year-round affair in the era of Peak TV. The British Academy of Film and Television Arts (BAFTA) kicked off the celebrations 28 March with the announcement of their TV awards. Leading the pack with a whopping 14 nods, including stars Sandra Oh and Jodie Comer and writer-creator Phoebe Waller-Bridge, was BBC America and BBC One’s Killing Eve.

Competing with Oh and Comer in the leading actress category are Ruth Wilson for playing her own grandmother in Mrs Wilson and Keeley Hawes for Bodyguard. Hawes is also nominated in the supporting actress category for Mrs Wilson. Earning 12 total nominations was BBC One and Amazon Prime Video’s A Very English Scandal starring Hugh Grant and Ben Whishaw, both recognized. Grant is nominated for leading actor alongside Benedict Cumberbatch for Patrick Melrose, Lucian Msamati for Kiri, and Chance Perdomo for Killed By My Debt.

The 2019 Virgin Media British Academy Television Awards will take place 12 May at the Royal Festival Hall in London, broadcast live on BBC One. Included in the nominations list are the BAFTA TV Craft Awards, which will be feted 28 April at The Brewery. That gives us plenty of time to speculate about potential winners and make predictions. The public can also vote online for their favourite Must-See Moment at virginmedia.com/bafta.

For a full list of British Academy Television Award nominations and more information on all things BAFTA, visit their website.

Jack Smart
Jack Smart is the awards editor at Backstage, where he covers all things Emmy, SAG, Oscar, and Tony Awards. He also produces and hosts Backstage’s awards podcast “In the Envelope” and has interviewed some of the biggest stars of stage and screen.
END_OF_DOCUMENT_TOKEN_TO_BE_REPLACED