“Clearly I’m not good at doing anything the easy way, right?”

For anyone who is familiar with Cynthia Erivo’s body of work, her words are something of an understatement. This is, after all, the same woman who once ran a half-marathon in New York before performing a two-show day of Broadway’s 2016 revival of “The Color Purple,” in which she was onstage virtually the entire show as its hero, Celie. Erivo chuckles and demurs at the memory now, but such a physical feat is no laughing matter. Celie also earned Erivo a 2016 Tony Award, a Grammy, an Emmy, and the sort of industry clout that is seldom—if ever—achieved through theater.

And, no—none of it came easy.

“I hope [my trajectory] stands as an example of what can come from theater,” she says amid a whirlwind press day at the St. Cloud Rooftop in Times Square. “These are people who just happen to be able to do everything, and they’re onstage because they can do everything. It’s a strange thing that people don’t see how much work it takes to be onstage.” 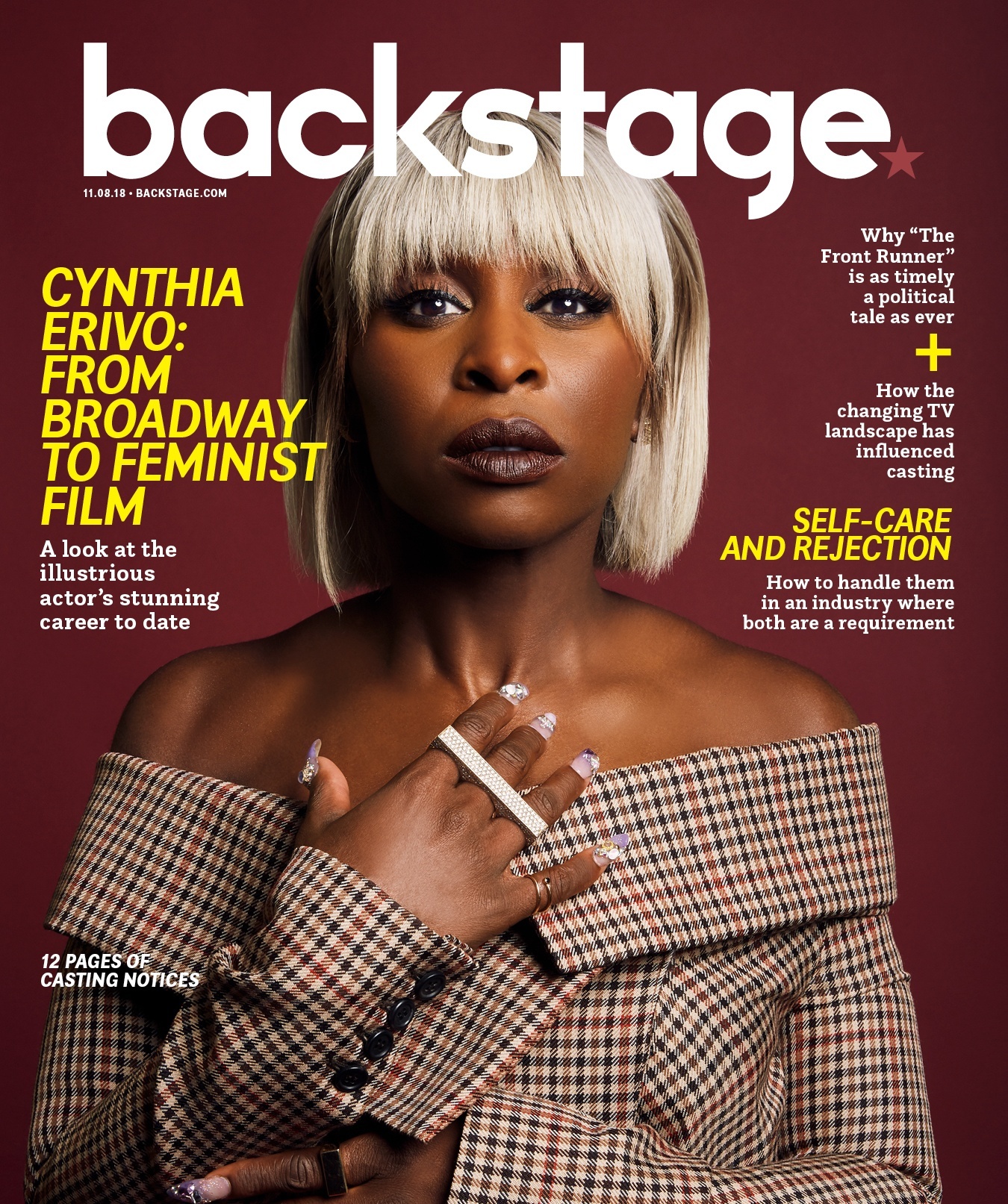 While in the middle of her “Color Purple” run—her Broadway debut—the British-born Erivo was scouted for her first film, “Widows” (out Nov. 16), helmed by Oscar-winning “12 Years a Slave” director Steve McQueen and boasting an ensemble with the likes of Viola Davis, Liam Neeson, Michelle Rodriguez, and Colin Farrell. Shortly thereafter, she landed “Bad Times at the El Royale,” a suspense drama that paired her with more Hollywood heavyweights, Jeff Bridges, Jon Hamm, and Chris Hemsworth among them. And that’s not to mention “Harriet.” News broke in September that Erivo will portray the Underground Railroad heroine Harriet Tubman in the biopic about her life. The Kasi Lemmons feature is slated for release next year.

Erivo herself can’t quite believe this all stemmed from “The Color Purple,” which she first performed in a 200-seat London theater just a few years ago. “If someone had laid out for me the things that have been happening in the last two years alone, I would think I was hallucinating,” she deadpans.

Reclining on a velour couch just days before she’s due in Virginia to begin production on “Harriet,” the powerhouse performer is proud of the work that’s taken her to this point—but she’s under no illusion that there isn’t more work to be done. Actually, because her entry into cinema has been so definitively high-stakes, she’s had to essentially enroll in what could be considered a crash course in film acting.

“If I were starting off with a small indie movie, it would be like baby steps. But no, I was thrown in the deep end,” she says of her debut in “Widows,” a heist flick about a group of women bound by the shared debt their murdered husbands left behind. Aside from a few television projects, it was the first film set Erivo had ever stepped foot on.

“Everybody else knows exactly what the hell they’re doing, so you just jump in, you listen,” Erivo advises of her experience. “I listened to everything Steve told me and learned by osmosis watching Viola. That’s what it was the entire time—scared shitless, because I had no idea whether I was getting it right. I didn’t have the live audience now; I just had a camera.” 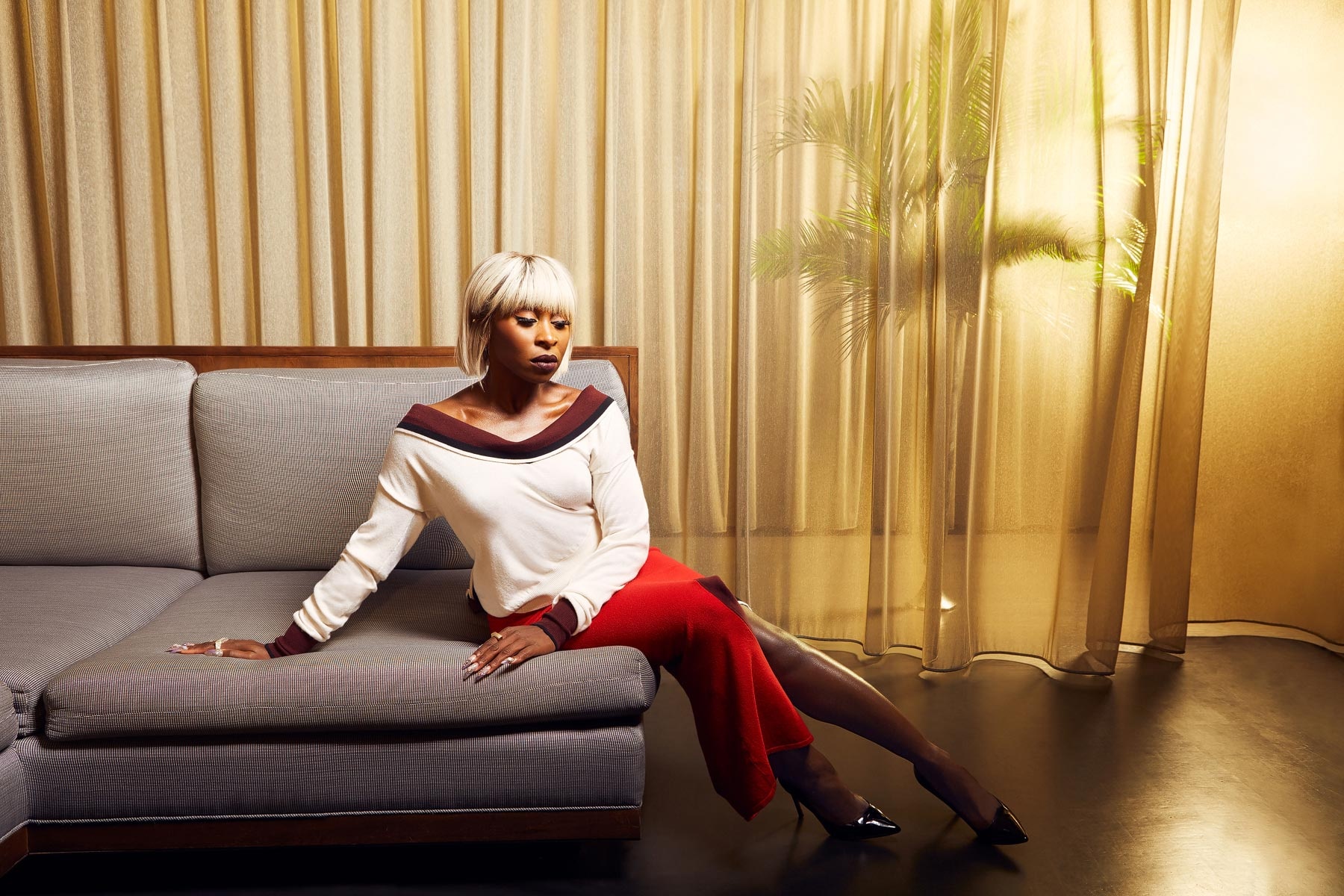 That, Erivo explains, has been the biggest adjustment in transitioning from one medium to the other: the lack of that live audience.

“You have that intimate conversation with the audience when you’re onstage because they tell you what they need,” she says. “With film, you don’t have any of that. You rely on your gut instinct, your director, and the actors around you. It’s taught me to be patient with myself. If it doesn’t go right the first time, you have another try. The perfectionist in me is like, ‘You only have one chance, so get it right,’ because that’s what stage is. But it’s OK to not [do that].”

Erivo also took full advantage of her time on set to educate herself about the broader filmmaking process. “I occupied my [downtime] by moseying over and seeing what the cinematographer is doing—what’s this light here, why are you using this camera? Really learning,” she recalls. “Get to know the cameraman or [first AD]. Just—‘What’s your name? My name’s this. What’s going on?’ This would not happen without them. There are so many jobs on a set; to discount any one of them is a disservice to everyone. It’s a perfect opportunity to learn new things.”

What’s remained consistent for Erivo in her leap from stage to screen has been the attention she pays to the story. For that reason, “Widows” was all the more enticing. “They are completely different women from different walks of life with different values, but this is the thing that has pulled them together, and they are able to pull it off because they work together,” she says of the film’s female leads. She pauses to emphasize her next thought: “Women have more power than you think they do.”

The thematic power of women, in fact, is a thread woven throughout Erivo’s work. For each woman she portrays, she fleshes out every crevasse of her inner life, ensuring the character never becomes flat or archetypal. “I like to create touchpoints, details that only this person would know,” she explains. “What perfume does she wear? What’s her birthday? Would she wear a certain color? Who is her dad? Was she raised by a single mom? [I create] those tiny details that no one can see but that translate onto the screen.”

Also enduring across mediums is Erivo’s relationship to auditions—and to their outcomes. “I take each audition as an opportunity to just play another character,” she says. “Yeses and noes are one thing, but if you take every audition as a learning experience, it can’t hurt you. There’s a way to use your auditions as something that can empower as opposed to crush you. They don’t have to be that way.” 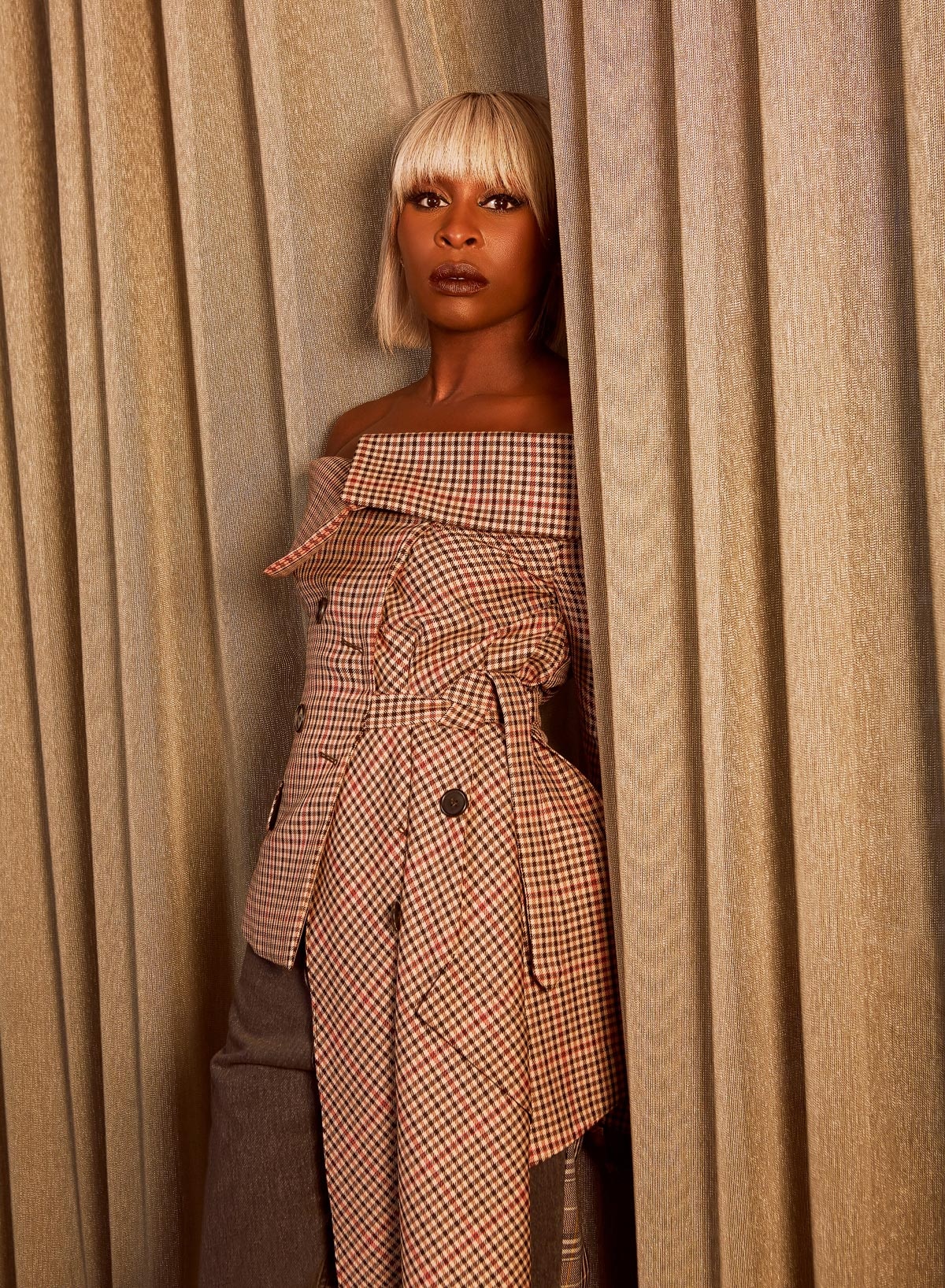 That positive outlook aside, it’s easy to imagine that auditioning will be a thing of Erivo’s past post-“Harriet.” Every step of the way and with each new project, the multifaceted performer has checked in with herself and recalibrated her goals. “I have a sheet of paper where I write down the things that I want, and by the end of 2017, I’d ticked them all off,” she says with endearing disbelief. “Now I need a new list because the far-reaching ones are no longer far-reaching enough.”

Perhaps most remarkable about her ascension is how tactfully Erivo has been able to subvert categorization in an industry that is frequently desperate to box performers in. It hasn’t come without her putting in the work.

“You have to be unafraid of saying no to things you know you can do but you know you don’t need to do,” she says. “I always knew I wanted to be able to do everything, but that’s taken me going, ‘No, I can’t do that again.’ It’s so hard because your brain is saying, ‘That’s not logical. You’re not giving yourself the money you need to pay rent.’ But if you’re the swing who wants to play leads, you have to start saying no to playing the swing. It’s scary as hell, but it’s the only way to change how people see you.”

No matter what one’s long-term ambitions may be, Erivo’s advice for performers at every level is the same advice she gives herself: Be present. “It can be overwhelming, so now I make a point to [recognize], ‘This is happening right now, and I’m appreciative of it,’ ” she says. “You only get the first time once—and if you don’t live through it and enjoy it, it’s pointless.”

Styling by Sarah Slutsky. Sweater and skirt by Area, shoes by Rupert Sanderson. Dress by Versace. Hair and makeup by Joanna Simkin and Coree Moreno.

Casey Mink
Casey Mink is the senior staff writer at Backstage. When she's not writing about television, film, or theater, she is definitely somewhere watching it.
END_OF_DOCUMENT_TOKEN_TO_BE_REPLACED