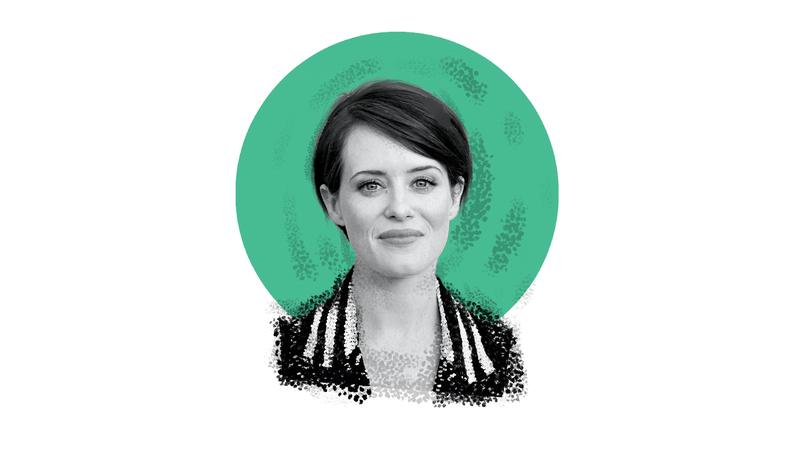 Claire Foy shot to international fame two years ago as Queen Elizabeth II on Netflix’s “The Crown.” While her reign on the royal drama has wrapped as she passes the crown to Olivia Colman for the queen’s later years, her workload has hardly slowed. She led feature films “Unsane” and “The Girl in the Spider’s Web” earlier this year, and she is now fielding Oscar buzz and is up for a Golden Globe for her riveting supporting turn in Damien Chazelle’s Neil Armstrong biopic, “First Man.”

How did playing Janet Armstrong, Neil’s wife, add to your acting skills?
I had to learn a lot about the reality of that situation. I’m used to dialogue and scripted themes, but Damien was very keen on capturing the improvised family life. That really helped me, and I enjoyed it because it meant that I could live in Janet and not feel the pressure of having to perform. I could just try things out and not worry about failing. I learned a lot from the improvisation part of it.

How do you prepare for a role?
It changes from job to job, but I do lots of research because I enjoy that—any way I can get at it. I watch documentaries about the time periods or people involved; however, if I can get firsthand accounts about the experiences people have, I find that really important. Music is also important. Before a shoot, those songs that I listened to will be the only ones I listen to while shooting. Then it’s lovely, because I have songs that remind me entirely of that period of time. I make a book of key moments that have happened in that person’s life. I fill them in, write them, imagine them, put myself in that scenario, and write it down so I can call on it if I need to while shooting. I have a book for every character I’ve played, which, if I make it to 60, might be nice to sit down and read.

What is your worst audition story?
Oh my, all of them! I can’t tell you how much time I’ve spent walking around Soho in London after an audition and cringing. One of my first-ever jobs was “Season of the Witch” with Nicolas Cage, where I had to play an evil young girl who was possessed by the devil. The director, while I was acting in the audition, was saying, “And now the cage is burning; and now you’re melting the bars of the cage; and now go for it, go for it, go for it!” And I was thinking, Do I have to? In those moments you just have to go for it, you can’t say, “I’m really sorry, I’m so embarrassed.” You just have to do it. But there are thousands of them, thousands.

READ: The 1 Audition Trick That Landed Claire Foy Top Billing on ‘The Crown’

What advice would you give your younger self?
Don’t worry, you’re going to live to 34 (so far), so get on with your life. Don’t care what anyone else thinks.

What type of role or genre would you like to take on that you haven’t done yet?
I would love to do a musical or something like that, but nobody else seems to want me to do that, so I probably shouldn’t. I absolutely love dancing, so I would love to do anything that means I could train to be a dancer for a little bit. That would be my absolute dream.

How do you prepare for an audition?
For one, learn the lines. [But] there’s no point trying to be off-book if you aren’t acting it. If you have to look down at the page, it’s much better [to hold the script] than be only thinking about what you’re saying. It’s about finding that person in those words. Someone once said to me when I was at drama school, “What is the impetus to being? Why is that character speaking?” People don’t just blather on for no reason. People are moved to speak for some reason. Why is that character communicating at that point? Why are they choosing those words to speak that reason? What does that say about them as a person? If they’re talking about an experience, find out as much as you possibly can about what that experience would be like. Instead of learning the lines, focus on the experience so that when you’re speaking it, people feel like you’ve been there as opposed to someone doing a monologue. Also, I have to have the pages, I can’t do it on an iPad. I have to have the hard copy in hand; I can’t do an audition if I’ve got a screen in front of me.

How do you handle playing very different roles back to back?
When I’m focused on one thing, I’m really focused on it, but then I just have to do the work that I can that won’t interfere with the other character. That was really easy for “First Man” and “The Girl in the Spider’s Web” because I had the books. My main thing with “Spider’s Web” was that I wanted to read all the books, I didn’t want someone to read them for me and summarize them. I was able to do that in my off days and in the evenings. I also learned very quickly at drama school that you can’t say to yourself, “I have to have done this, this, and this to be ready for the character.” You only have the amount of time that you have, so it’s less about the man hours that you put into it and more about the actual work that you do that’s going to be significant. That will help you and will inform that character. To me, there’s no point in doing the exercise where I choose an animal and spend nine hours as a beaver as that character. It’s not going to inform what I do. Over the years, I’ve learned there are a few things that will ultimately lead to me being confident enough to go on set.

How do you keep yourself from burning out?
I don’t, really. Before, I loved taking time off. I loved those periods of downtime in between shooting, but for whatever reason, it’s just been three years of full-on work, so I’m due that time to relax and I’m just going to do it.

How did your early work prepare you for more high-profile, international projects?
It’s all experience. When you’ve been doing any job for 10 years, you should have a set of skills, you should have acquired a sense of what you’re being asked to do, and you should be able to execute it well in whatever field that’s in. If you’ve been doing the same thing for 10 years, you’d hope by that point that you would have learned quite a lot. What it’s given me is a really good understanding of, yes, the things I’m doing now are more high-profile, but the things I’m doing are still exactly the same. It still has the same importance to me. I will put as much effort into “First Man” as I would my first-ever job. To me, acting, performing—people paying to watch me act or sitting down and watching a TV program I’ve made is reason enough to work my ass off because no one’s doing me a favor. I’m very lucky to be doing it. I realize that every job I’ve ever done, I’ve put the same amount of effort, energy, and time into, regardless of where it sits in the scheme of things.

Elyse Roth
Elyse is a senior editor at Backstage, where she oversees all casting news and features content, including her weekly casting director Q&A series, In the Room. She came to New York from Ohio by way of Northwestern University, where she studied journalism, and now lives in Brooklyn. She might see and write about awards-worthy films, but Elyse still thinks “Legally Blonde” is a perfect movie and on any given night is probably taking in some kind of entertainment, whether it’s comedy, theater, ballet, or figuring out what show to binge next.
END_OF_DOCUMENT_TOKEN_TO_BE_REPLACED