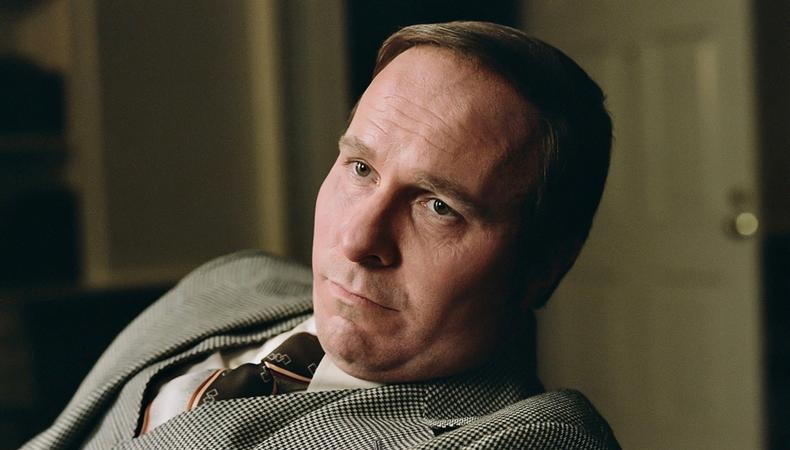 The nominating committee of the Screen Actors Guild Awards has chosen its best performers of film and television, and now it’s time for members to vote! Take our word for it: Picking a favorite is difficult in a year of such strong individual performances. Here’s your official cheat sheet to the SAG nominees and what makes each worthy of taking home a statue this year.

OUTSTANDING PERFORMANCE BY A FEMALE ACTOR IN A LEADING ROLE

Emily Blunt, “Mary Poppins Returns”
“Practically perfect in every way” describes everyone’s favorite flying nanny, but it could also apply to Blunt, one of Hollywood’s most versatile triple threats working on the big screen today. She doesn’t attempt to copy the role made iconic by Julie Andrews, instead bringing her own flair to a graceful, humorous Mary Poppins that audiences will no doubt find irresistible.

Glenn Close, “The Wife”
Only in Close’s hands could a lifetime of resentment boil over into a climactic, shattering rage that practically shakes the walls of the movie theater. Restrained and then devastating, her performance in “The Wife” as a genius overshadowed by her successful but conniving husband (Jonathan Pryce) is her best in years. Given all her impeccable onscreen work (and six Oscar nominations, but no wins), that’s really saying something.

Olivia Colman, “The Favourite”
This British actor had little notoriety on this side of the pond just months ago, despite a 2017 Golden Globe win for “The Night Manager,” but that’s about to change. Her master class performance as Queen Anne in Yorgos Lanthimos’ twisted royal palace comedy is heartbreaking, hilarious, cruel, outlandish, and full of memorably nontraditional poise. Colman brings the power and the nuance, but prioritizes fun first and foremost.

Lady Gaga, “A Star Is Born”
The year’s most exhilarating cinematic moment belongs to this superstar, and it encompasses every quality that makes her feature film debut an instant classic. Bradley Cooper’s Jackson Maine invites her Ally onto his stage in front of thousands, and as the music—Gaga’s music, of course—is pouring out of her like a geyser, she covers her eyes in disbelief. Like the rest of her performance, it’s both epic and intensely intimate, the kind of magic that reminds us why we go to the movies.

Melissa McCarthy, “Can You Ever Forgive Me?”
In becoming Lee Israel, the biographer and recluse who made ends meet by forging letters from famous literary wits, McCarthy somehow harnesses her natural affinity for humor while also subverting it; her Lee is acidly funny, yes, but she’s also depressed as hell and irritable with pretty much everyone except her cat. To watch her reigniting passions and discovering joy, however briefly, during her criminal enterprises is to watch a tragicomic master at work. 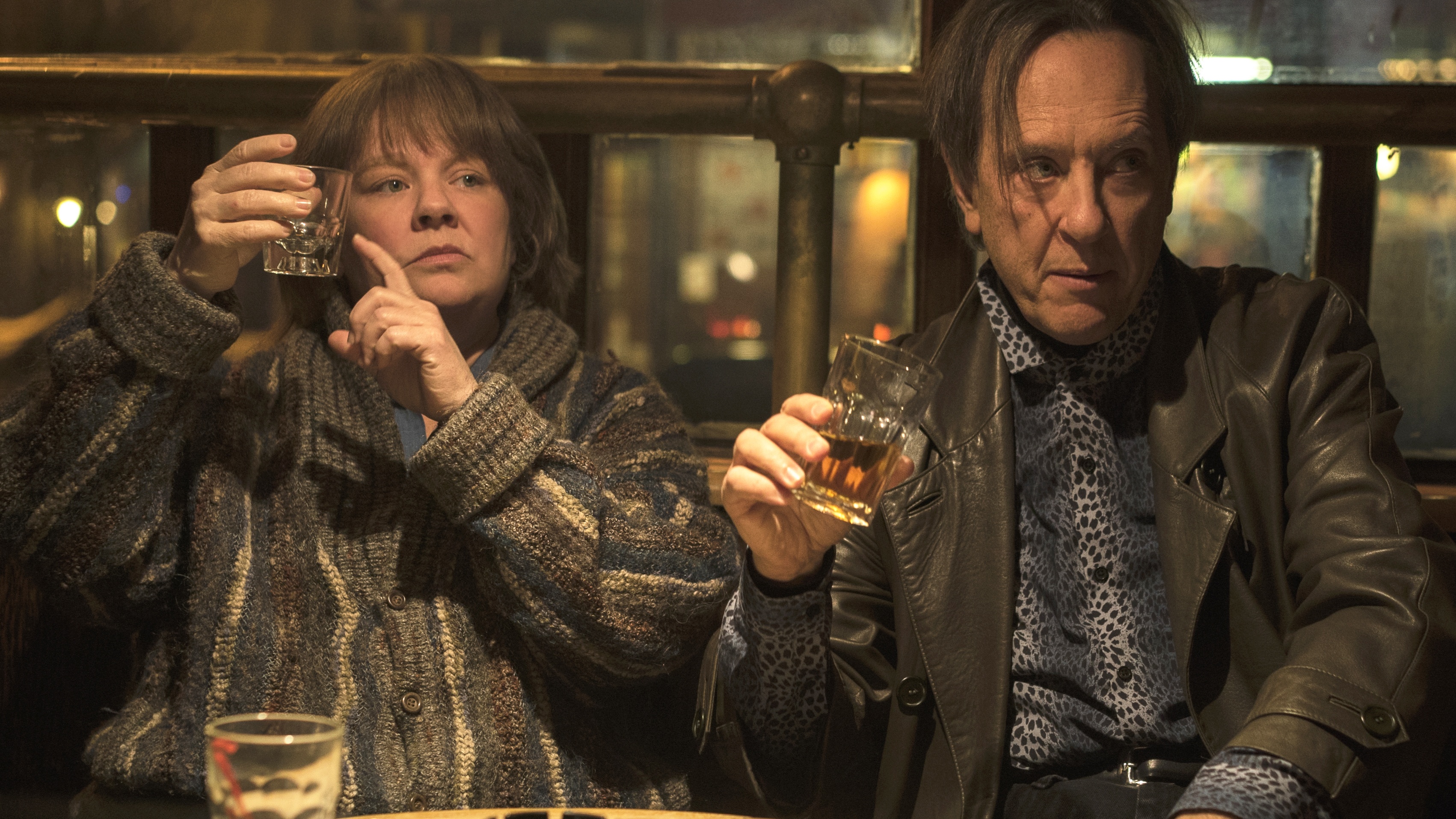 OUTSTANDING PERFORMANCE BY A MALE ACTOR IN A LEADING ROLE

Christian Bale, “Vice”
Bale playing U.S. Vice President Dick Cheney is one of those instances where the casting announcement itself seems to merit an award. There are probably plenty of actors who could take a crack at the severe, sinister politician, but Bale comes with his own distinct guarantee: to-the-bone commitment to an intense role with just a sprinkling of irreverence.

Bradley Cooper, “A Star Is Born”
Have you heard? Cooper made a movie—and he astounds in it. This is one of those star turns in which the actor takes drastic means to alter their physicality (that gravelly voice!) so they can react and emote completely in character. Ragged rock star Jackson Maine so badly wants to save himself for the person he loves, and ultimately cannot fill that gaping void with all the whiskey and power duets in the world.

Rami Malek, “Bohemian Rhapsody”
Malek struts, wails, purrs, poses, fights, and, best of all, entertains as Freddie Mercury in this Queen biopic. His capital-P performance seems better suited to verbs than adjectives, so active is his full-bodied transformation into the band’s flamboyant frontman. The last several minutes of this movie re-create the rock star’s iconic Live Aid concert with eye-popping detail and energy, and Malek sears himself into his captive audience’s minds. 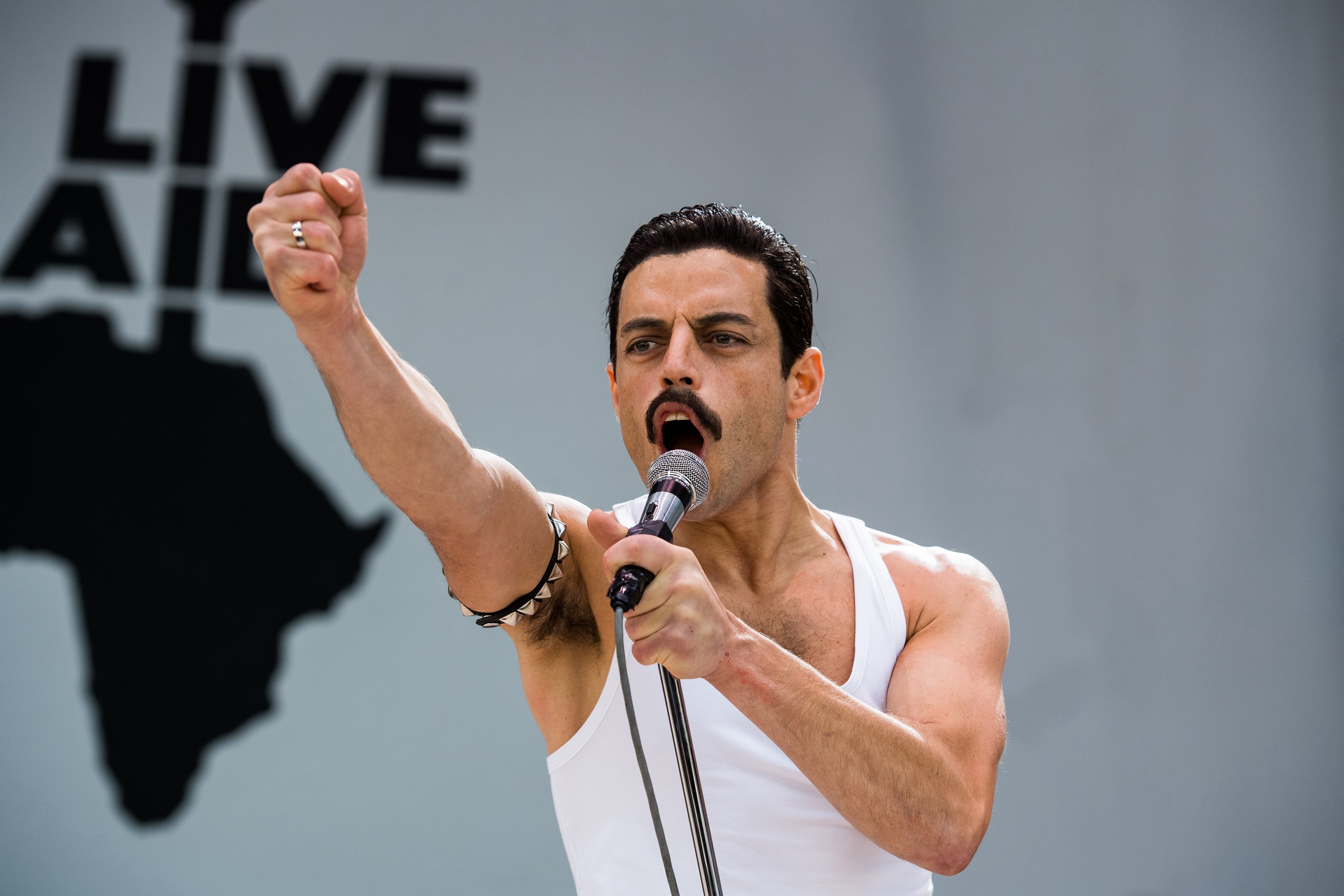 Viggo Mortensen, “Green Book”
Mortensen is one of those actors who can alter something within themselves, not just externally with makeup or costumes, to disappear into a character. In this two-hander about a road trip in the 1960s segregated South, Mortensen pulls off an endlessly enjoyable type: the tough-guy slob. His New York bouncer-turned-driver Tony Lip provides a specific, brilliant contrast to Mahershala Ali’s uptight pianist Dr. Don Shirley, and together the two make movie magic.

READ: Everything You Need to Know About the SAG Awards

John David Washington, “BlacKkKlansman”
Of all this year’s period pieces that say more about today than their era, Spike Lee’s “BlacKkKlansman” feels like the quintessential example. Washington plays Ron Stallworth, the black detective who schemed to infiltrate his local Ku Klux Klan chapter and eventually got the ear of David Duke himself. Imbuing his performance with equal parts 1970s and 2018, Washington’s steady gaze assesses or questions every status quo; there’s an ocean of thought and feeling just behind the actor’s eyes that speaks volumes.

OUTSTANDING PERFORMANCE BY A FEMALE ACTOR IN A SUPPORTING ROLE

Amy Adams, “Vice”
A one-time SAG ensemble winner and five-time Oscar nominee, the outrageously talented Adams seems long overdue for a big-screen credit that puts some gold on her mantel. Could it be the role of Lynne Cheney, wife to Christian Bale’s infamous American vice president? It’s without a doubt one of the most delicious scene-stealing turns of the year.

Emily Blunt, “A Quiet Place”
In as different a project as possible from her other 2018 hit, “Mary Poppins Returns,” Blunt proves equally adept at powerful, minimalist horror. Alongside writer-director-star John Krasinski, she lends vivid specificity to a wife and mother doing what she must to protect her family—all while barely speaking a word. The scene in which she gives birth while attempting to remain in complete silence as extraterrestrial sound-seekers creep ever closer is one for the books.

Margot Robbie, “Mary Queen of Scots”
Queen Elizabeth I is catnip for awards voters, and watching Robbie’s take on England’s most intriguing queen, it’s easy to remember why. She’s an extraordinary historical figure who requires the kind of actor who can go big with scenes of hysteria and rage or shrink into the deepest of insecurities. That Robbie manages to swing between the two and remain credible is a testament to her star power.

Emma Stone, “The Favourite”
When Abigail Masham first arrives at court, she’s a bit of an audience stand-in. What on earth is going on in the house of Queen Anne, and how can a lady brought low by circumstance survive, let alone climb the ranks? But then Stone drifts, tantalizingly, into temptation, as if hunger for power is contagious, and we as an audience begin asking: Exactly how diabolically manipulative is she?

Rachel Weisz, “The Favourite”
There’s a moment in Yorgos Lanthimos’ quasi-comedy period piece where Weisz’s Sarah Churchill, Duchess of Marlborough, the not-so-secret puller of Queen Anne’s strings, comes nose-to-nose with a gentleman in power who is screaming his head off, and she doesn’t even blink. In fact, she looks bored. Her portrayal of steadfast, stubborn haughtiness—not to mention her ability to show off those stunning bodices and skirts—is unmatched.

OUTSTANDING PERFORMANCE BY A MALE ACTOR IN A SUPPORTING ROLE

Mahershala Ali, “Green Book”
From his first moment onscreen, the picture of stateliness as celebrated classical pianist Dr. Don Shirley, Ali has complete mastery over his character—and his audience. Peter Farrelly’s “Green Book” charts the literal and emotional journey undertaken by the highbrow Shirley and his boorish driver, Tony Lip, in the segregated 1960s American South. It takes as astute an actor as Ali to navigate a growing friendship this nuanced, all while interjecting moments of heartwarming humor.

Timothée Chalamet, “Beautiful Boy”
If there were any doubts that Chalamet is one of the most vital and thrilling actors of his generation, they are officially banished with this real-life cautionary tale of a tormented addict and his father (played by Steve Carell). Chalamet is an absolute marvel while on the verge of tears that seem to well up from within his soul, while struggling to make eye contact with the people who love him, or while simply grinning in the sunlight. 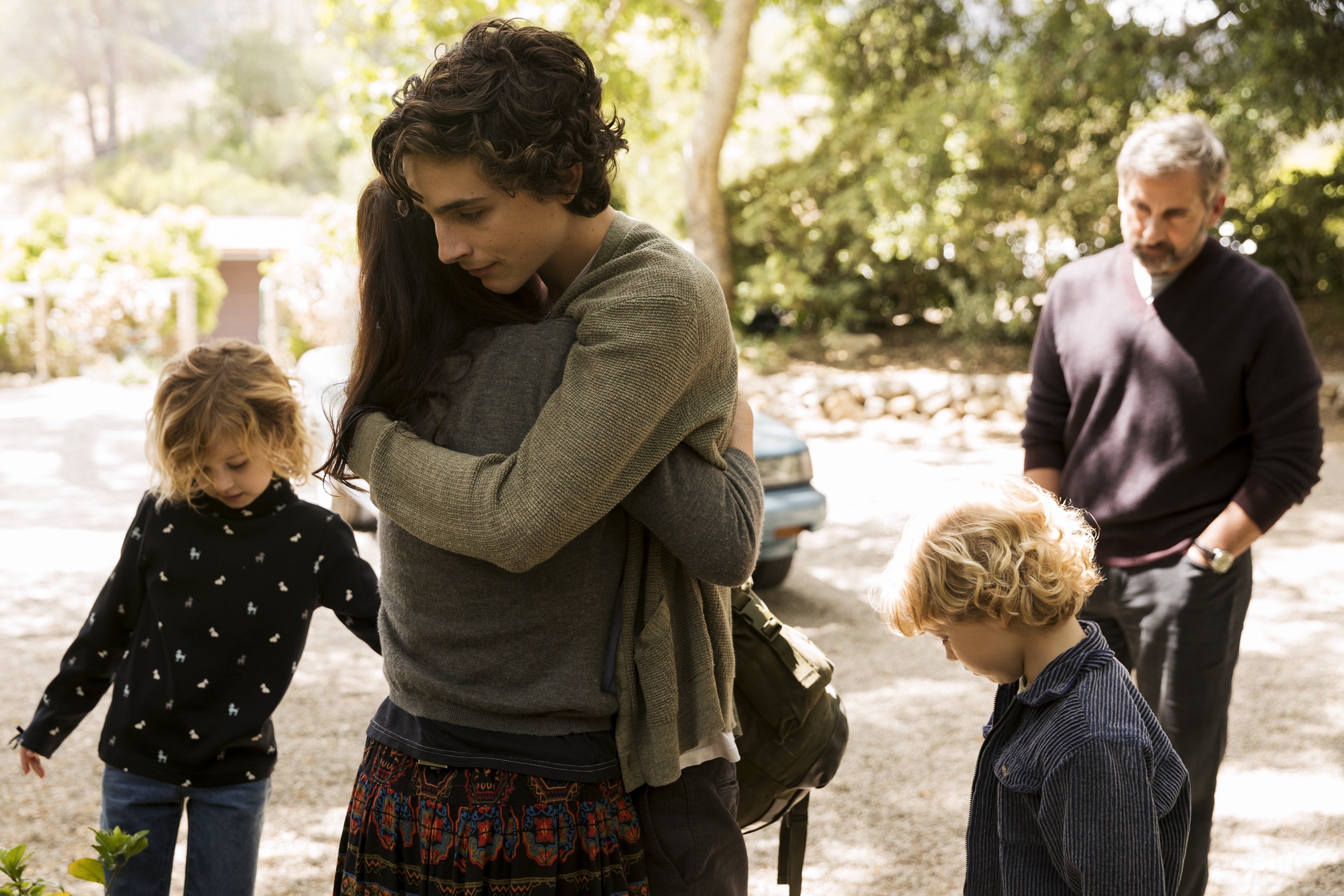 Adam Driver, “BlacKkKlansman”
Flip Zimmerman was the real-life detective who helped infiltrate a Colorado chapter of the Ku Klux Klan in the 1970s. As Flip, Driver must essentially play two roles: the principled cop and the vicious white supremacist created for him to play-act. The actor’s standout scene is a quiet meditation on his own identity and faith, almost a pause to the proceedings that Driver sits with and ponders beautifully.

Sam Elliott, “A Star Is Born”
Elliott’s signature drawl and cowboy demeanor found their best role in years with “A Star Is Born,” in which he co-stars as Bobby Maine, brother and manager to Cooper’s rock star Jackson. We feel those clashes with his brother on a visceral level, only to have our hearts ripped out in later scenes where, try as he might, Bobby can’t hide his loyalty to the guy.

Richard E. Grant, “Can You Ever Forgive Me?”
Grant capitalizes on his inherent charm in Marielle Heller’s adaptation of Lee Israel’s memoir. As Jack Hock, drinking buddy and forgery co-conspirator to Melissa McCarthy’s Lee, the actor excels at playing the kind of bitchy friend who makes you laugh guiltily in spite of yourself. Grant then delivers a touching, but still foul-mouthed, final scene that has landed him on awards shortlists aplenty.