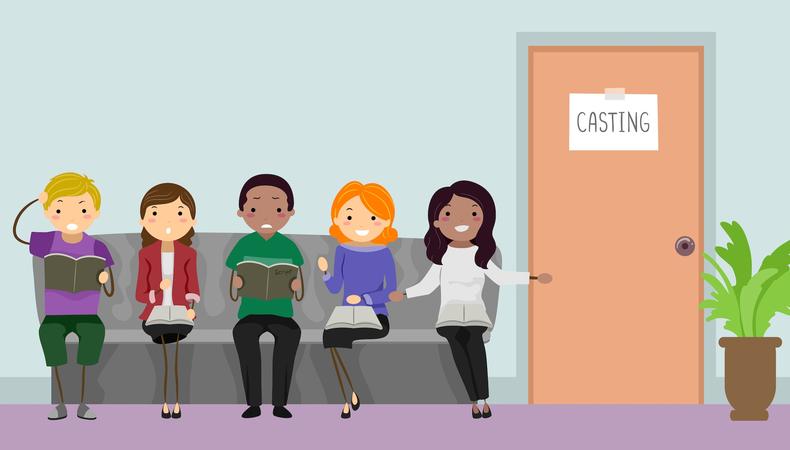 There are certain things every actor should consider when going into an audition—particularly a few big no-no’s that could hurt (or even ruin) your chances for callbacks or casting. As a casting director, these seven common mistakes make me cringe. Instead of being able to focus on whether or not the actor is right for the role, I'm now distracted by an audition faux pas. This list should help you identify—and avoid—doing something to irritate the casting director and derail your acting audition or self-tape.

1. Don’t shake hands unless the casting director initiates it.
The audition starts the minute you walk into the room—not just when you start performing the lines. Casting directors are looking for actors who are going to be easy to work with as much as looking at how they perform the part. They see heaps of actors in a short time span. If every actor walks in, sticks out a hand to shake, and makes small talk before launching into the performance, the CD will not be a happy one. Let the CD initiate any pleasantries; it’ll keep the environment open and friendly.

2. Remember that the reader isn’t acting with you.
Oh, the stories I could tell of aspiring actors who don’t understand this important piece of audition etiquette. The reader is only there to give you someone to play off—they are not acting with you. Most often, the reader will be placed near the camera with a few feet between your chair or mark and theirs. Feel free to use them as an eye line, but don’t approach them.

During one casting session, we had an actor not only touching the reader, but also directing them. It took us by surprise and made us feel unsafe. And the actor lost the opportunity for a second take of the scene. We don’t want this to happen, but if we don’t feel safe, we’ll end the audition. So please, recognize that the reader is there to feed you lines and to be an eye line, nothing more. They’re just reading—you’re the one acting.

3. Stop saying sorry.
I’ve had so many actors come in for an audition where they stumble over the lines and keep asking to restart the scene. Humans make mistakes; there are going to be times when we stumble over words, and that’s okay. If you really feel it’s important to start over, do it, but don’t apologize for making a mistake—we get it.

When someone apologizes, it makes us think we’ll have to hand-hold them through the project, even if that’s not actually the case. It’s okay to apologize once, but please don’t feel you need to keep doing it.

4. Always have your sides unless you’re told not to.
I’ve seen several actors come in without their sides. While I get that they think it shows they put the work in and memorized the part, having your sides handy shows the director that you’re willing to be moldable in changing the part up a bit. Even if you know the lines, hold the sides—unless you’re explicitly told not to.

5. Don’t dress the part or bring props.
Some of my favorite scenes from “Friends” are when Joey goes on auditions. They’re basically guides to what not to do at an audition. Learn from Joey's mistakes and don’t dress in costume or bring props. Sure, you can get away with subtle things—if you’re auditioning for a business person, it’s fine to dress in a suit—but there’s no need to audition for a role as a clown in full circus makeup. The same goes for props. If you’re supposed to be drinking something in the scene, bring a water bottle. Anything you’d naturally have on your person can be used, but highly-specific props make you stand out (and not in a positive way).

And since so many auditions are submitted via self-tape these days, here are a few mistakes I see often—and that you can easily avoid:

6. You still need a reader.
I’ve seen self-tapes where the actor stares off-screen during another character’s lines, but there’s no reader there. It’s hard to watch these because I can see the actor struggle to “hear” the other characters. Do yourself a favor and ask a friend (preferably an actor) to read with you so the whole thing is more realistic.

7. Light, frame, and sound matter a lot.
While I encourage actors to shoot self-tapes on their smartphones rather than seek out a professional setup, you do still have to keep a few things in mind:

Remember: Casting directors want you to be "the one." I hope these tips help you nail your next audition, whether it's in person or self-taped.