Broadway Will Remain Closed for Remainder of 2020 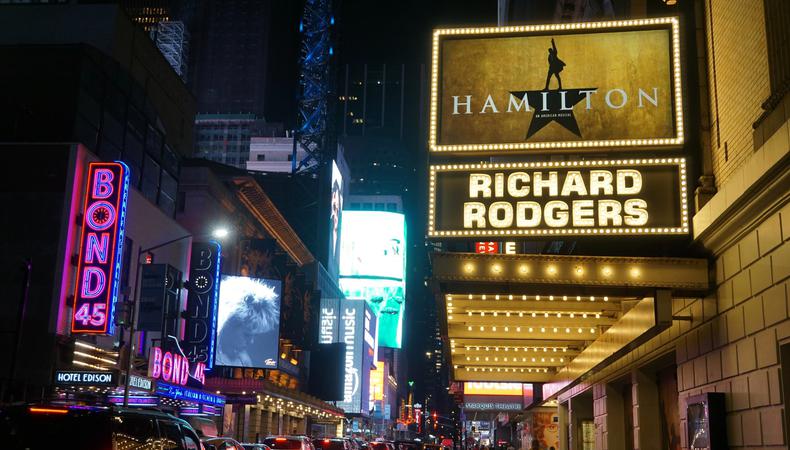 Broadway will remain closed for the remainder of 2020 due to concerns over the spread of COVID-19. The announcement from the Broadway League—representing Broadway producers—is the third time the restart date has been pushed back for the world’s most famous commercial theater economy. Initially shut down in mid-March, 2020 will mark a stark point in Broadway history: the season with only two and a half months of live performances.

“The Broadway experience can be deeply personal, but it is also, crucially, communal,” said Broadway League board chairman Thomas Schumacher. “The alchemy of 1,000 strangers bonding into a single audience fueling each performer on stage and behind the scenes will be possible again when Broadway theatres can safely host full houses.... The safety of our cast, crew, orchestra, and audience is our highest priority, and we look forward to returning to our stages only when it’s safe to do so.”

When Broadway performances were initially suspended earlier this spring as New York City became a global hotspot for COVID-19 infections, 31 productions were running, eight were in previews, and eight were in rehearsals.

Since New York’s governor Andrew Cuomo mandated the shutdowns, two productions in previews (“Hangmen” and a revival of “Who’s Afraid of Virginia Woolf”) were called off and Disney Theatrical Group’s “Frozen,” which opened in 2017, closed shop for good and was loaded out of the St. James Theater.

In response to the announcement from the League, Actors’ Equity called on Congress to expand relief funding to include stimulus for the performing arts in the HEROES Act, the latest stimulus package being debated on Capitol Hill.

“Countless regional theaters have made the exact same decision as Broadway, and are voluntarily postponing their seasons and putting the safety and health of their audiences and workers first,” said Brandon Lorenz, National Director of Communications and Public Policy for Equity. “These responsible decisions mean that the industry will need support so that when it is safe to reopen, the arts can go back to work and help the entire economy recover. While the HEROES Act has important provisions on unemployment and health insurance subsidies, what is sadly missing is arts funding and loans that will enable the live performing arts to quickly reopen and help the economy grow.”

In an early May press conference with Equity and other entertainment unions nationwide, labor leaders acknowledged that live entertainment could be among one of the last industries to return to business as usual. In a later press conference, Equity revealed that no theater would be approved for reopening by the union until specific infrastructures like testing, reliable data, and venue modifications are readily available.

“Our membership is working closely with the theatrical unions and in concert with key experts and some of the greatest minds inside and outside of the industry to explore protocols for all aspects of reopening,” said Charlotte St. Martin, president of the Broadway League. “We are focused on identifying and implementing necessary measures that will enable us to resume performances safely for Broadway audiences and employees.”

Broadway commercial theater is big business for New York City’s economy, contributing $14.7 billion to the city’s economy and supporting 96,900 jobs, according to the League. The biggest advertisement for Broadway, the Tony Awards, which is annually broadcasted live on CBS, was postponed in late March.

Broadway is also an influencer for the decisions of nonprofit theaters in New York City, like Off- and Off-Off-Broadway (which contribute $1.3 billion to the local economy) and regional stages around the country. According to Americans for the Arts, the average nonprofit arts attendee spends another $31.41 per person, per show beyond the cost of admission in their local economy. While nonprofit theaters can accommodate small houses more easily, physical proximity on and off stage might still be too tight.

With health experts agreeing that the virus is out of control in the United States, and with infections spiking nationwide, it is unclear when it might be deemed safe for actors and audiences to return to the theater.