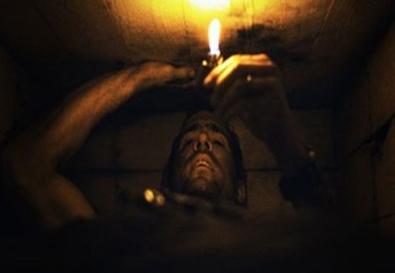 Simply put, "Buried" is a cinematic tour de force for Ryan Reynolds, who proves in this one-man show that he is as effective in drama as in the comedies, like "The Proposal," with which he's had his greatest success. And as dramas go, this is about as intense an assignment as an actor could ever get.

Reynolds is the only person onscreen during the entire 94 minutes of this claustrophobic nail-biter about Paul Conroy, a contract truck driver in Iraq, who wakes up essentially buried alive in a dark wooden coffin with no idea how he got there or where "there" even is. Armed with only a lighter and a cell phone, his fate is detailed in a series of frantic calls he makes to get someone, anyone, to help him out of this dire predicament.

Eventually the phone rings with a ransom demand from the terrorist who buried him, asking for $5 million in return for his freedom. Although Reynolds is the only human we see, a slew of other actors provide the voices on the other end of his phone calls. In this regard, "Buried" is closest in tone to the film "Phone Booth," in which Colin Farrell played a man who had to stay on a public telephone to remain alive.

Director Rodrigo Cortes opens this tricky and disturbing Hitchcockian film in a risky manner, leaving the screen totally dark for a couple of minutes before the flash of a lighter reveals Conroy's sweaty, dirty face and the realization that he is very much trapped and alone.

If nothing else, "Buried" is great product placement for BlackBerry, as Conroy gets amazing reception from a box deep underground in a remote area of Iraq; we have trouble getting a signal just driving down the street in a huge American metropolis. Although the crystal-clear service is credibility-defying, without it there wouldn't be a movie.

It works as well as it does because of Reynolds' remarkable performance. The actor, his movement restricted in the confined space, uses his face and voice to convey frustration, terror, anger, hope, and more to carry us through this horrifying scenario. It's a challenging role, to say the least. Reynolds brilliantly makes us believe every moment.