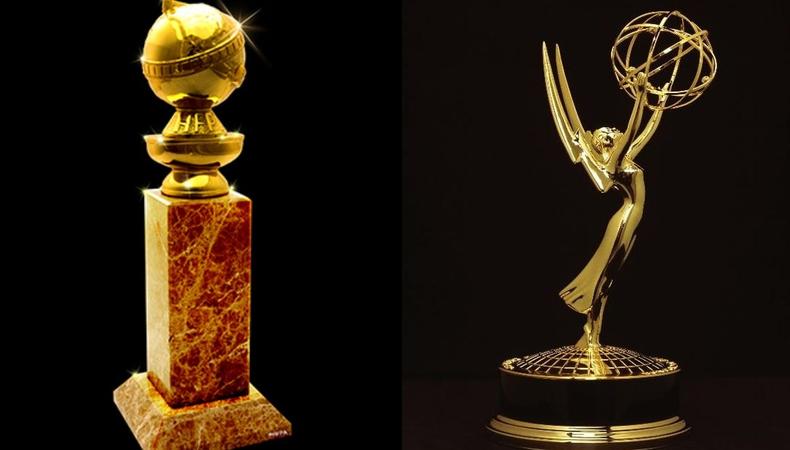 The two most high-profile award shows in the world of television, the Golden Globes and the Primetime Emmy Awards are household names—but how much does one mean in relation to the other? How do they differ? And can one be used to predict the results of the other?

The Golden Globes are earlier in the calendar year, taking place in January; the Hollywood Foreign Press Association rewards both film and television during the ceremony. The HFPA is a relatively small voting pool (around 90 members) when compared to the over 20,000 members of the Academy of Television Arts & Sciences (ATAS), which present the Emmys.

The eligibility period of the two shows also differs, with the Golden Globes using the calendar year to consider projects, and the Primetime Emmy Awards beginning and ending their consideration (of TV programming that airs between 6:00 P.M. and 2:00 A.M. in the United States) at the end of May. This especially makes a difference when it comes to limited series and comparing the winners of each category in a one-to-one correlation. The Emmy ceremony also takes place alongside the premiere of fall television, with a September date.

Trends have emerged in recent years that may make it possible to predict both nominees and winners in major Golden Globe and Emmy categories. Check out a more extensive breakdown of the two award shows’ relationship over the last few years:

Best Comedy Series: The Globes and Emmys have been out of step since 2011, when ABC’s “Modern Family” took home both awards. The Primetime Emmys have repeatedly honored HBO’s “Veep” with the honor of Outstanding Comedy Series; it has won three years in a row (this year the show did not air a new season, clearing room for a new or veteran series to take home the honor). The Golden Globes, on the other hand, have been as varied as the Emmys have been consistent. Since 2011, each year a different project has won the Golden Globe—and often a freshman series: HBO’s “Girls,” Fox’s “Brooklyn Nine-Nine,” Amazon’s “Transparent,” Amazon’s “Mozart in the Jungle,” FX’s “Atlanta”, and most recently Amazon’s “The Marvelous Mrs. Maisel,” which is Emmy-nominated for its first season.

Best Drama Series: Back in 2012, Showtime’s “Homeland” took home both statues. The two awards stayed parallel the following year, with AMC’s “Breaking Bad” sweeping both honors. However, the voting bodies then parted ways, with the Golden Globes going to many new shows: Showtime’s “The Affair,” USA’s “Mr. Robot,” Netflix’s “The Crown” and then Hulu’s “The Handmaid's Tale.” The Emmys remained steadfast, giving “Breaking Bad” a second statue and then honoring HBO’s “Game of Thrones” for two years in a row, before last year also opting for the first major streaming winner, “The Handmaid’s Tale”—not a strong correlation, but much more in line than the two institutions’ stances on comedy programming.

Best Lead Actress in a Comedy Series: In one of the Emmys’ most notable records, this honor has been exclusively handed to Julia Louis-Dreyfus for her role as Selina Meyer in the ATAS favorite, HBO’s “Veep.” However, not nominated in 2018, Louis-Dreyfus gives up her dynastic-like rule of the category. Significantly more varied in this slot, the Golden Globes have championed critical greats like Amy Poehler for NBC’s “Parks and Recreation,” Tracee Ellis Ross for ABC’s “Black-ish,” and the daring and critically lauded Rachel Bloom and Gina Rodriguez, for The CW’s “Crazy Ex-Girlfriend” and “Jane the Virgin,” respectively. The most recent Globe winner in the category is Rachel Brosnahan for “The Marvelous Mrs. Maisel,” which makes her current Emmy nod this year look promising.

Best Lead Actor in a Comedy Series: Over the last five years ATAS has given this Best Actor crown twice to Jim Parsons for his role as Dr. Sheldon Cooper in the CBS sitcom “The Big Bang Theory,” then to Jeffrey Tambor for his performance as Maura Pfefferman in “Transparent,” before breaking the trend and awarding last year’s prize to Donald Glover for Season 1 of “Atlanta,” for which he also took home a Globe. The Golden Globes have also recognized Tambor for his performance in “Transparent,” making this category the one that shares the most correlations (last year Aziz Ansari of Netflix’s “Master of None” won, ineligible for Emmys this year). Will Glover’s win at the Golden Globe give him a repeat victory at the Emmys? He is nominated in the category, and the Academy does have a reputation of repeating honorees.

Best Lead Actor in a Drama Series: The dramatic actor category has shared some overlap over the years, though certainly not a one-to-one correlation. Sterling K. Brown has taken both Emmy and Globe for his role as Randall Pearson in the NBC drama “This Is Us,” and winning the Globe this past January may bode well for another Emmy win. The two awards have in recent years both honored performances by Bryan Cranston for “Breaking Bad” and Jon Hamm for AMC’s “Mad Men.”

Best Lead Actress in a Drama Series: The two awards have shared only one winner over the past five years, so it is equally out of step as the other categories. In the last year the two institutions both favored Elisabeth Moss’ performance in “The Handmaid’s Tale.” The Academy has nominated Moss again this year for her performance in the second season of the Hulu original, solidifying her frontrunner status.

How will the relationship fare this year? Who do you think will win TV’s biggest honors? Keep checking in with Backstage to find out!

Win an award of your own! Check out Backstage’s TV audition listings!