How ‘The Deuce’ Star Emily Meade Got What She Needed: Intimacy Coordinators 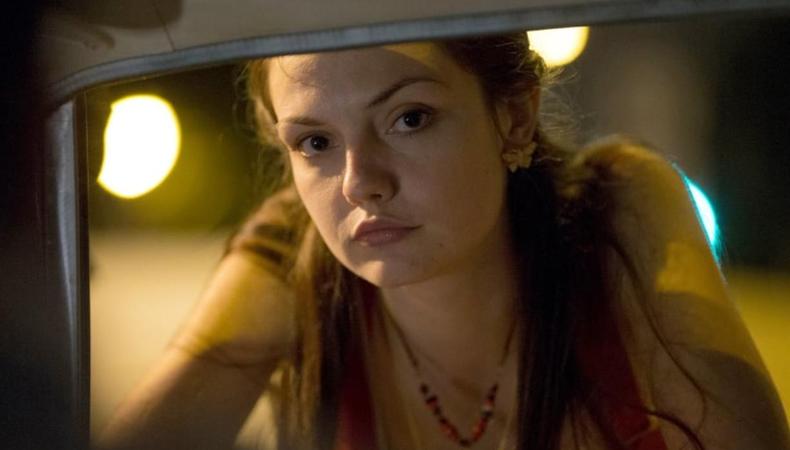 Today, every HBO series requires an intimacy coordinator to be present on every series that includes scenes of intimacy. But that didn’t just happen over night—it happened because Emily Meade spoke up. The actor, who plays Lori Madison alongside Maggie Gyllenhaal and James Franco on “The Deuce,” didn’t know there was such a position as an intimacy coordinator (a person whose job is to liaise between actors and production in regards to sex scenes); she did know there was a missing piece when it came to bridging the gap between the fast pace of television and this sex industry–centered series’ nearly-unprecedented volume of intimate scenes.

After writing a letter to SAG-AFTRA, the actor got what she needed, and as a result, the practice has been codified across the industry. Here’s why she did it, and why she’ll never go back.

At what point did you become aware that intimacy coordination existed?
I wasn’t, until after I asked for somebody to be there on set. The kind of ironic, crazy part of it all is that it wasn’t until I went to HBO. I told them that I felt that there should be somebody there to oversee and liaise and [who are] specifically designated to help a sex scene. It wasn’t until then that I even learned that this was actually, in fact, a position that did exist, it just had never been utilized in film or television yet.

Prior to “The Deuce,” what had your experiences shooting intimate scenes been like?
They ranged. Some of them were perfectly fine and some of them were very uncomfortable, and some of them were uncomfortable in ways that I wasn’t even aware of at the time because sex, in general, and sexuality, there’s just so many layers and levels of consciousness to be experienced to begin with, then throw in your career, and a lot of people depending on you. Some of these things are hard to even really be in touch with how you feel about them. It wasn’t so much that “The Deuce” itself had better or worse or any different type of sex scenes, it was just the mixture of the volume of them and the fact that suddenly Time’s Up and #MeToo is happening where people were actually reflecting on these things and I actually felt I had the room to ask myself how I felt about it. So, yeah, I’ve had traumatic experiences, I’ve had fine experiences. But overall, it’s something that’s hard to keep consistent, which is why I thought of this idea of having a person there—without even knowing it did, in fact, exist.

What about “The Deuce” made you feel compelled or comfortable enough to ask for what you needed?
It was a perfect storm of being on a show about sex, where the sex scenes were incredibly valued and necessary, but there was a lot of them. The process of doing that in a television show is very different than a film, because you don’t have it all laid out when you sign on, and each episode is a new script and a new sex scene; you don’t have nearly as much time to process and prepare. That, plus getting older and more mature and more honest with myself about my own sensitivities, plus Time’s Up and #MeToo—not only that conversation in general, but our show becoming a part of that conversation. It was sort of like these three roads colliding to this moment of me being honest with myself and trying to think of a resolution, because for me, I didn’t quite feel comfortable to—I wouldn’t even call it complain—but to just speak up without some sort of idea of how to fix it.

In your opinion, does having an intimacy coordinator present make for better acting and ultimately better scenes?
Yes. For me, it’s night and day. Obviously, I can’t speak for everyone, but anyone who’s had pushback or issues with it, an intimacy coordinator can be as involved or as uninvolved as you want them to be. Just their mere presence isn’t imposing and it doesn’t mean you have to be dealing with them every step of the way, but if you want to, you can. Having that option, and having that safety, it’s like being a child and having your parents in the next room. Just to have the safety of someone who’s there and who has my back in that way has allowed me such a freedom to let go and be more present and focus on my performance than on protecting myself in these scenes. It’s been hugely transformative for me.

What does working with an intimacy coordinator actually look like?
Everybody has the room to utilize them as much or as little as they want. For me, one of the things that has always been hard is I wanted an intimacy coordinator for the initial conversation part. On this show, each episode has a new sex scene and a new director who you didn’t necessarily have a relationship with, and you’re kind of conditioned in a lot of ways in this industry to feel like you don’t want to be a problem, and you don’t want to make an issue. It’s especially uncomfortable when working with people who you either don’t know or you know [well] and are friends with and who you don’t want to disappoint. I, the past two seasons, have had Alicia [Rodis], our intimacy coordinator, speak to the directors first [and] her delivering the information to me so that I have a moment where I can honestly react and respond and not have to be worried about what the director wants or thinks and have my own reaction and process it. If I have any sort of issues or questions, I can tell her and she can deliver that back to the directors and all these things can be established before the conversation I have with the director, where we are talking about how it’s gonna artistically work. But a lot of people just want to speak to the director first, which is also perfectly fine.

And then how does the relationship function once you’re on set?
When it comes to being on set, we’ve all had these conversations beforehand, and then Alicia becomes mostly there for moral support. She comes and says hi and checks in in the morning to see how you’re feeling. She talks to all the actors that are involved and makes sure everybody’s on the same page and comfortable. Then when it comes to the actual scene, she’s there for rehearsal, and again, she’s not imposing some sort of plan, she’s just overseeing, and then she’s just there checking in with you as much or as little as it seems necessary, and she’s there watching the monitor and making sure everything’s going according to plan. Even if it is, if you are uncomfortable at any point, she’s there and you can go to her, and also sometimes she helps to choreograph if there’s a struggle with making something look realistic. She’s also trained in stunts and physicality, so she can help suggest a way to sell something in a better way.

A common refrain when this topic is broached is: How has it taken until now? Why do you think it has?
It’s taken a long time because, to be honest, I think people are still uncomfortable with sex and so confused about it that it’s really hard to prioritize having honest conversations about. People don’t even know how to have honest conversations about it. The majority of directors I’ve worked with do care how you feel and they want you to be comfortable, but it’s much easier said than done, than to have an honest conversation with another human being. Half the time, when directors offer, “If you’re ever uncomfortable, tell me,” I would never argue that they don’t mean that, but it’s a very different thing to actually do that. Of course, there are financial components and there are control components, too. People are very afraid of spending more money than they have to.

People are very afraid of losing control, and when Alicia Rodis and two other intimacy coordinators and I went to SAG about making this a rule, we asked them what the pushback was, and it was sort of like, “Well, that steps over the line. That’s the director’s job,” to which I reply, “Well, it doesn’t step over the line any more than a stunt coordinator, who’s there to just help facilitate the director and actor’s vision.” The intimacy coordinator isn’t there to tell anybody how to do anything. There are control and money issues and tie that into sex, it’s not as clear of a danger as violence. A stunt coordinator came onto the scene way earlier because that was required, whereas sex is kind of ambiguous. But as we’ve seen with Time’s Up and #MeToo, a lot of damage was being done that people haven’t known how to talk about, and now it’s like this volcano erupting: “Oh shit. This has been a problem this whole time.”

Casey Mink
Casey Mink is the senior staff writer at Backstage. When she's not writing about television, film, or theater, she is definitely somewhere watching it.
END_OF_DOCUMENT_TOKEN_TO_BE_REPLACED