‘The Morini Strad’ Reminds Audiences of the Value of Art 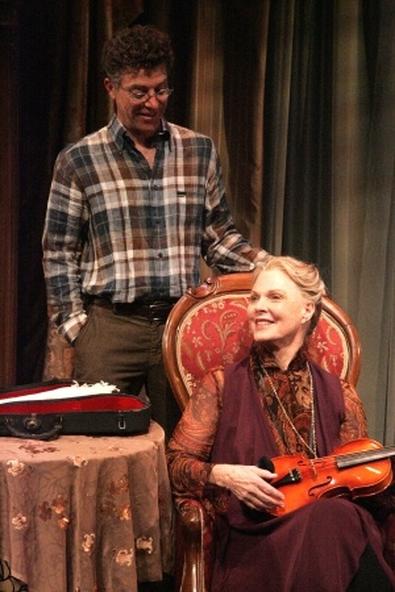 There’s a slightness and quiet austerity inherent in Willy Holtzman’s “The Morini Strad,” based on an actual notorious art theft that remains a mystery. As soon as the luminous Mariette Hartley, as aged violinist Erica Morini, shuffles through scenic designer Stephen Gifford’s massive two-story curtains to answer the door of her Fifth Avenue abode, there’s little doubt what’s going to happen. What there is instead is a straightforward, lyrically gentle reminder about the nature of art, and what is often sacrificed to become an artist in a pragmatic world. “Once you’ve stepped into the spotlight,” Morini reminisces, recalling her Carnegie Hall debut at age 16, “one might not ever want to step out of it again.”

When Morini began her notable career in Vienna at age 12, she gave up her childhood. Holtzman’s play finds her late in life when fame has gone and she lives a solitary life, never leaving her apartment. She surmises to houseguest Brian Skarstad (David Nevell) that it must appear she lives like Norma Desmond, disappearing into memories of former glory. “I’m still big! It’s the music that got small!” she quips, proving her frailty has not compromised her humor. Morini listens to crackling old LPs of her concerts as she guards the 300-year-old Davidoff Stradivarius violin her father gave her as a child prodigy. (Purchased in the ’20s or ’30s, by the time the instrument disappeared from Morini’s locked armoire in 1995 its value was more than $3.5 million.)

Stephanie Vlahos’s theatrical direction, weaving seamlessly from grand to delicately nuanced, seems orchestrated as a musical composition rather than a play. Without Hartley’s extraordinary performance, neither Holtzman’s story nor Vlahos’ staging might have worked. Slowly peeling away layers of distrust and disappointment with her station in life as the piece nears its conclusion, Hartley creates a breathtakingly multifaceted eccentric, at times brittle and difficult, at others bristling with passion and a surprising penchant for off-color jokes.

Nevell is the ideal foil for Hartley as Skarstad, a working-class violin restorer hired to secretly repair a scratch on the Strad so Morini might put it up for sale. There’s a charming, rumpled quality in Nevell’s interpretation of the man, both in appearance and in the disorder and frustrations of his life. (Although it is hard to know whether the actor’s habitual chin and forehead rubbing and hair stroking is a character choice, or one of those bad habits actors adopt without realizing it.)

The production is beautifully complemented by Gifford’s abstract set, able to suddenly transform into a massive concert hall; Kate Bergh’s elegant costuming; Jared A. Sayeg’s dreamlike lighting; and Drew Dalzell’s occasionally sweeping, occasionally hushed sound design. The appearance of incredibly gifted 14-year-old violinist Geneva Lewis, who appears as both a wincingly bad music student and as the vision of Morini in moments from times past, inspires hope for the future of the arts. How wonderful that the overlooked Erica Morini—and her fervency for her art—has finally received the attention she deserves.