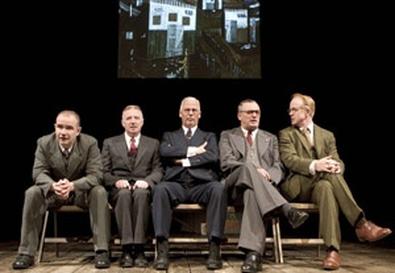 Photo Source: Joan Marcus
Lee Hall's "The Pitmen Painters" is a bit like the art made by its characters: Whatever it lacks in technique it more than makes up for in expression. If the characters are sometimes too predictable and the sentiment a bit thick, that doesn't prevent the two-and-a-half-hour play from being thoroughly entertaining.

Inspired by the true story of a group of coal miners in the north of England who in 1934 took up art and ended up famous, as recounted in a book by William Feaver, "Painters" offers the requisite collection of disparate types. George, the leader, is obsessed with "proper procedure": rules, regulations, order. Intellectual Harry, who's not a miner due to a war injury, is a passionate Marxist who sees everything through an ideological lens. Imperturbable Jimmy is a bit thick and takes everything literally. Quiet Oliver seems a bit younger than the others and is the most complicated of the lot, though he tries not to show it. Completing the picture is George's nephew, an amiable lad, neither bright nor confident, who's tolerated as an observer. Then there's Robert, the teacher, another type, with his posh accent, classic tweedy English handsomeness, and ivory-tower vocabulary.

Meeting under the auspices of a miners' union organization known as the Workers Educational Association, the four men have chosen to study art appreciation over introductory economics. Hall has a high time with the comic clash of cultures that leads Robert to the idea of having the men take up painting. Right from the start, their untutored work is arresting, each man's individuality shining through. (The paintings themselves are beautifully integrated into the production as projections on screens by set designer Gary McCann.) As the men interact and discuss their work, we glean information about their stunted lives and watch them blossom. By the end of Act , they have begun to be noticed by the art world and are transformed as human beings, and many a writer would have ended things there. But Hall takes the story further and admirably doesn't shy from suggesting that knowledge and achievement can have a painful price.

What really distinguishes "Painters" is the superb acting of its all-U.K. company under Max Roberts' knowing direction. Deka Walmsley takes care to let George's vulnerability underlie his bluster. Michael Hodgson makes Harry's political rants both funny and endearing. David Whitaker slyly understates Jimmy, who may be dense but can sling a zinger with the best of them. Christopher Connel's carefully laid groundwork results in complete believability when Oliver starts to realize his potential. Best of all is how these four actors create such a vivid sense of community. The sense of having known each other all their lives is palpable.

Ian Kelly thoroughly shakes the clueless-intellectual stereotype, excelling at showing how Robert is as transformed by the experience as his pupils are and never hiding from the unpleasant whiff of exploitation in his character's actions. In a double-role assignment, Brian Lonsdale draws a vivid contrast between the darting nephew and a rather prissy young artist being bankrolled by Helen, a wealthy upper-class woman who starts to buy the pitmen's work. Phillippa Wilson shrewdly suggests Helen's narcissism, which she wraps up in an apparently guileless enthusiasm. As Susan, a comely lass Robert brings in to pose nude for the men, Lisa McGrillis is both sweet and tart, getting great comic mileage out of Susan's reactions to the group's knee-jerk moralistic disapproval.

When, in Act 2, Hall suddenly has these men speaking in the pretentious language of art critics, he gets his laughs, but the behavior doesn't quite ring true. Nevertheless, this exploration of the transformative power of art and the hidden potential in everyone is so deeply felt that it sweeps all cavils away. "The Pitmen Painters" is absorbing, thought-provoking, and very funny. What's not to like?