In a year that will certainly go down as one of the worst in modern history, things have actually been working out pretty nicely for Sarah Cooper. 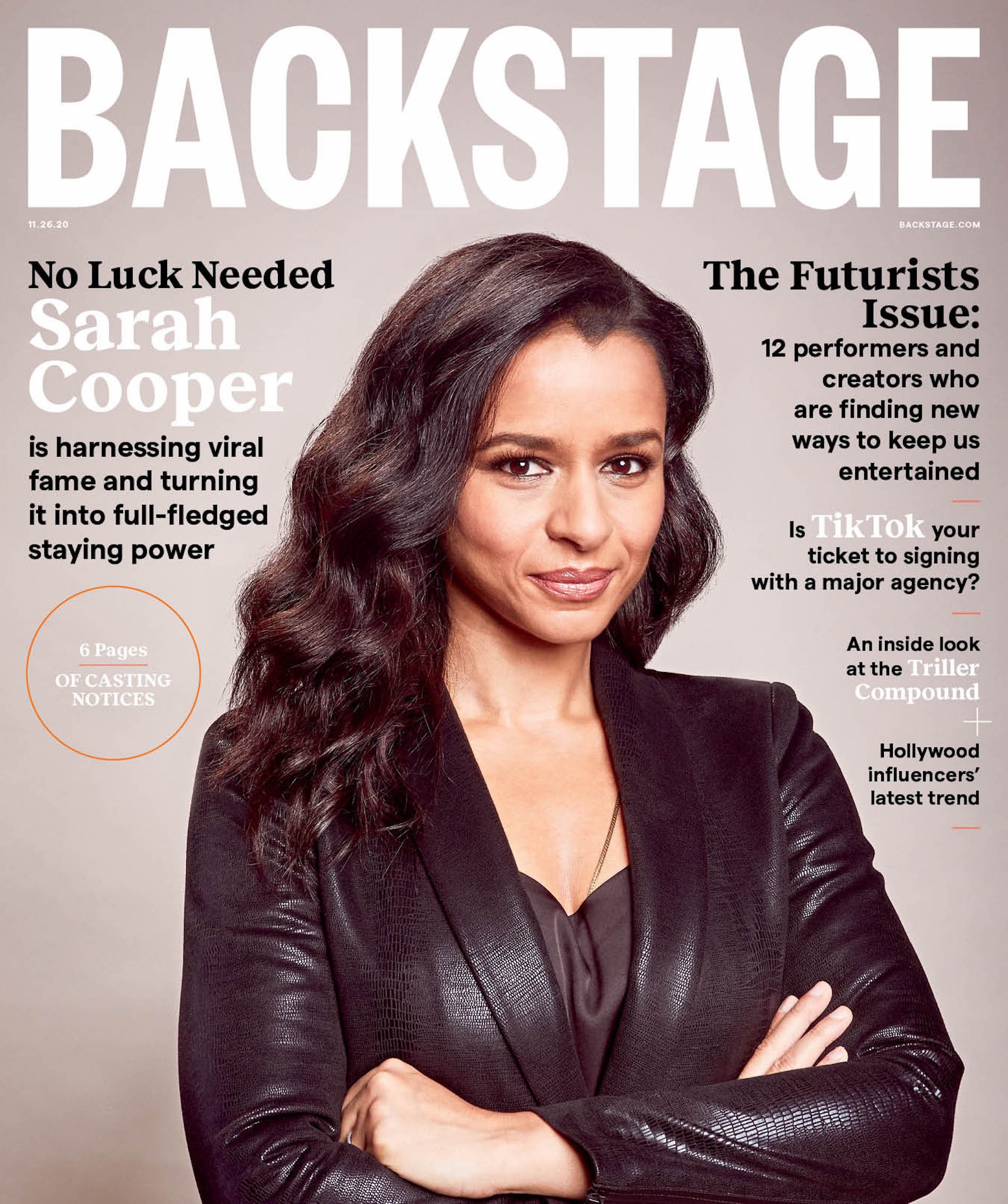 “It’s not just that things are going well,” Cooper says. “Things are going the best they’ve literally gone in my life, ever. I’m getting a billboard in Times Square. And I started by making TikToks in my living room.”

Cooper’s success isn’t just occurring simultaneously with the coronavirus pandemic or the ceaseless chaos and abdication of leadership in the White House—it is a product of both of these things. If you’ve spent any time online during these difficult eight months, you’re likely familiar with the writer-performer’s lip-syncs of President Donald Trump. They’re impressions with just a touch of pantomime, though she does not put on a wig or costume. Instead, she matches his intonation and pronunciation from real interviews and speeches, and lets his words, at last, speak for themselves.

“Somebody said it was the antidote to gaslighting, which I felt was really accurate,” Cooper says of the videos. “We’ve been told this is the greatest president we’ve ever had; we’ve been told this president has done more for Black people than anyone since Abraham Lincoln. This guy’s a con man, and for some reason, seeing his voice come out of my mouth made it so clear how ridiculous the words were.”

Like many during those first fearful weeks of the pandemic, Cooper had been tuning into the daily coronavirus task force press conferences, and she watched as Trump was “just standing there saying absolute nonsense.” Still, she wasn’t immediately compelled to impersonate him. Then, on April 23, the president floated the idea of injecting disinfectant and using UV light as possible treatments for the virus. Cooper grabbed her household bottle of cleaning spray, and the resulting video, “How to Medical,” caught fire.

Suddenly, she was appearing on the late-night circuit, she landed an agent, and she was eventually given a comedy special on Netflix, which is now streaming. All this after decades of trying to break through in comedy—though it was during a period inextricably linked with sorrow.

“This guy’s a con man, and for some reason, seeing his voice come out of my mouth made it so clear how ridiculous the words were.”

Speaking via Zoom from Brooklyn on an October afternoon, smack dab between Trump’s COVID-19 diagnosis and Election Day, Cooper still struggles to wrap her head around that particular dissonance. “There [are] so many people suffering and there’s so much that needs to be done, and hopefully those things will get done and people will get the help that they need,” she reflects. “And at the same time, yeah, I mean, I’ve been trying to break into Hollywood my whole life. And it happened this year.” 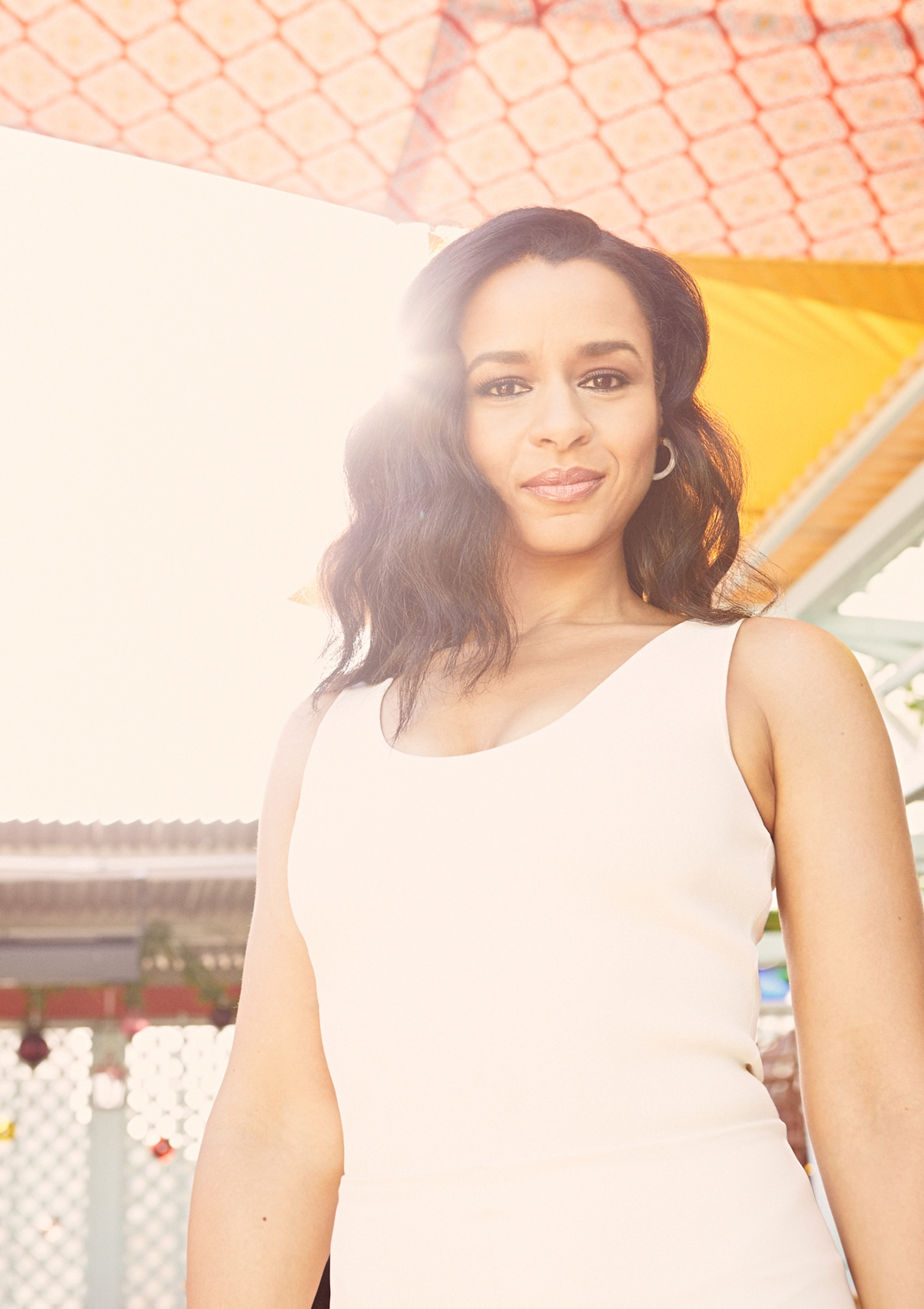 Beyond the boost that the Trump impression has given her career, with it, Cooper has also achieved something that many other comedians have long said could not be done: She successfully parodied this president.

“One thing that makes me feel a little bit better is the few times I get recognized, people come up to me and they say, ‘Thank you. You got me through this quarantine,’ ” she says. “People were able to laugh at something that’s not been funny for a long time. They were able to finally laugh at this monster, which has been hard to do because he is such a monster. That makes me feel like I wasn’t just doing something completely unrelated—that I’m part of something that maybe, hopefully, will help us get out of [this situation].”

READ: So, You Want to Try Standup?

Unlike most sensations, Cooper is clear about her intent with the videos: “I was trying to go viral,” she says matter-of-factly. But she wasn’t just aiming to be a one-off lightning rod to be retweeted by a few celebrities and then dissipate as the next meme or calamity swept the news cycle. She wanted to make something that could be serialized, that could evolve, and, yes, was something that she actually enjoyed doing. “I was playing around with TikTok because, even as a 42-year-old woman, I was like, Well, maybe I can figure this out,” she says with a laugh. “I am definitely not the target for TikTok; didn’t really think I’d be a TikTok star, tried to do one of the dances, [and] that did not work.

“It’s such an easy tool,” she adds. “I mean, I’m not that big on TikTok—that’s the other thing. People say I’m a TikTok star, but the thing is, I’m more on Twitter than anywhere else. I really was using TikTok to make the videos, and then taking those videos and posting them on Twitter; and that’s really where they went viral.”

Despite her seemingly sudden success, it didn’t happen overnight. At 30, she quit her day job and moved back in with her parents in an attempt to focus on her acting career. Between commercial gigs and “really bad independent films,” she was auditioning for tiny roles on sitcoms and procedurals. But wins were elusive, and the despair was taking a toll on her self-worth. “I was so obsessed with losing weight and maybe having to get a nose job and maybe my teeth needed to get fixed,” she remembers. “Because that was the thing that was going to make me a good actress: how I look.”

It was during that time, in an attempt to become a more singular actor, that she found comedy. It didn’t change her circumstances in the tangible sense right away (“I obviously went broke, because you don’t make any money doing standup comedy”), but she did gain something that would become the bedrock of her career: her own voice and, even better, her calling card. 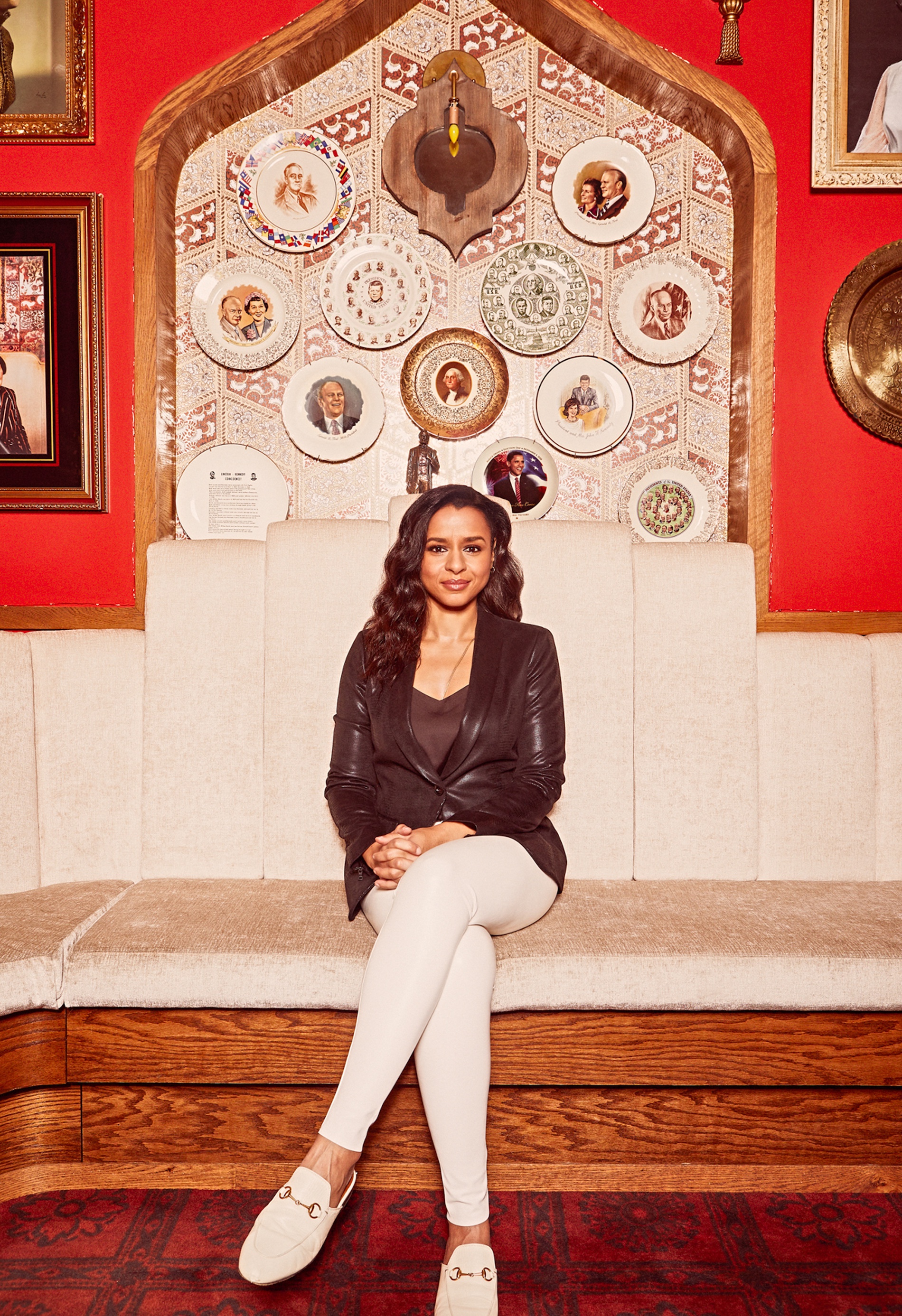 “If the four lines I had on ‘The Vampire Diaries’ or the two episodes I did of ‘Army Wives’ had made me, that would have sucked, because those were things I didn’t really care that much about,” she says. “I’m happy that this is what did it, because this is the stuff I’ve been talking about forever. To ‘make it’ doing what you want to do and what you actually care about is so important, and it took me so long to realize that I need to stop doing what I think other people want me to do, and I need to do what I want to do. And calling men out on their bullshit has been my thing.”

That Cooper can in some ways credit her expert bullshit meter for bringing her to this moment brings her career full circle. She wrote a book in 2016, “100 Tricks to Appear Smart in Meetings,” that was based on real lessons she learned during the four years she worked at Google. That’s right: Cooper worked at the tech giant, and earlier this year, she was preparing to look into getting that job back if she wasn’t able to book a late-night set. Her initial inspiration for the Trump impression even came from the insight she gleaned there.

“I saw him say something like, ‘I’m going to form a committee, I’m going to call it a committee, and we’re going to make decisions, and they’re going to be the right decisions.’ And I was like, Do you think you invented the concept of committees? Because you didn’t. That’s been around for a while,” she says. “It just reminded me of these guys in meetings when I was at Google who would come in and just bullshit.”

For a long time, Cooper was cagey about her days in the corporate world, for the obvious reason that it wasn’t “cool” among comedy folk. But it eventually dawned on her that it was a unique experience, one that most of her industry peers likely hadn’t had. She learned to use it to her advantage.

“Yeah, I worked in a fucking office for a while, and I met my husband there; I married a software engineer because I like tech, I like Google, I like being on Twitter, I like looking at analytics, [and] I built my own website. I’m a kind of nerd, and I just accepted that,” she says. “I wrote that book as I was sitting in meetings and I would notice somebody doing something, and I would just write it down. And for a long time, I thought, Whatever, I just write these things down. But then I was like, Oh, I’ve written down hundreds of these things, and that’s a book.”

But Cooper’s purview isn’t only about acknowledging your narrative—it’s taking ownership. In addition to another workplace-inspired book she wrote in 2018, “How to Be Successful Without Hurting Men’s Feelings,” she is currently at work on two sitcoms, both of which are set in offices. Denying your inherent interests, she argues, is only going to curb your creativity, or worse, make you miserable.

“It’s not a coincidence, what you like. You don’t remember everything that happened to you as a kid; you remember specific things, and those specific things, they mean something. Put them in something,” she insists. “I do notice now, the moments when I’m writing something and it makes me laugh. I look for those moments a lot more because, I mean, there’s a good chance that if you’re enjoying writing what you’re writing, other people will enjoy it. Give your ideas a chance; don’t just throw them away and tell yourself they’re not good enough. 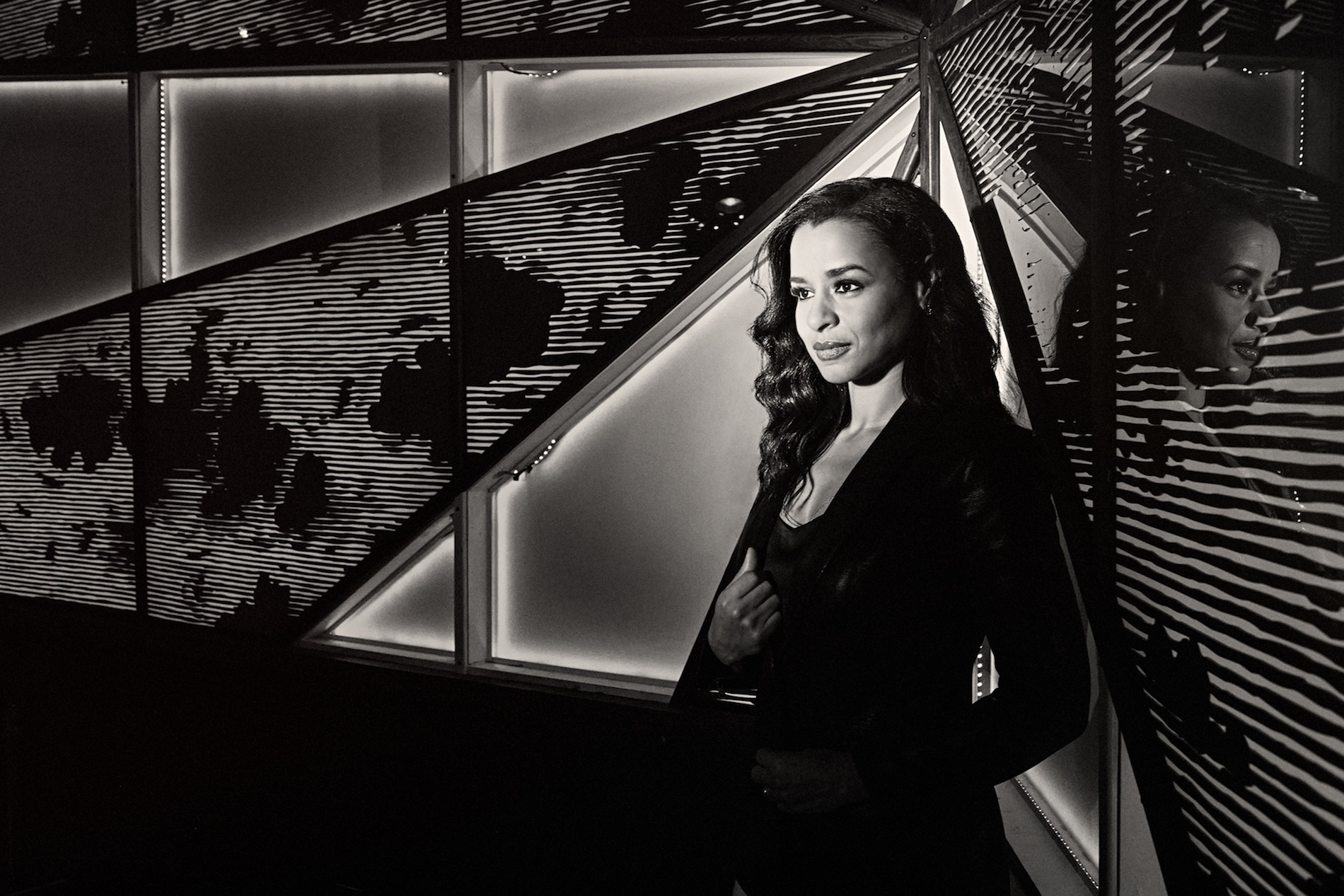 “But if you start doing something and you’re not enjoying it, and it doesn’t come naturally and you’re not addicted to it and it’s not something you are obsessed with, move on.” She pauses, adding a caveat: “Unless you need to do it for money.”

Writing from a place of joy was certainly the approach she took for her Netflix special, “Sarah Cooper: Everything’s Fine,” executive produced by Maya Rudolph and Natasha Lyonne (who also directed). The idea was to include the Trump impression but not base the special on it. It was a conscious choice, she adds, to take this thing people know and adore her for and then build on it.

“[This way,] people can see that I can do other things and there are other stories I want to tell,” she says. “That was an early idea I had, to have an entire special that was just me lip-syncing Trump. Working with my agents, we realized, Well, if I wanted a career 10 years from now lip-syncing people, that would be a good thing to make—but I don’t want that. I want more than that. I didn’t really have that thought until my agents—who I got through this thing—were like, ‘We don’t want you to be boxed into this thing.’ ”

Speaking to both the distant and not-so-distant future, before signing off, it had to be asked: How will Cooper feel if, by the time this story runs, we have a new president-elect?

Without hesitation, she responds with an exhale: “I will feel so good. I will feel like I helped expose a con man. And maybe I got a few more people to be like, ‘OK, we really do need to do something about this because this person should not be our president.’ People are like, ‘Oh, aren’t you sad he won’t be president anymore? He won’t give you any material!’ He doesn’t give me any material now. He’s been saying the same thing for four years. I’ll be very, very happy. And I’ll feel good about these videos.”

Photographed by Emily Assiran on 10/21 at the Turk’s Inn in Brooklyn, NY

Casey Mink
Casey Mink is the senior staff writer at Backstage. When she's not writing about television, film, or theater, she is definitely somewhere watching it.
END_OF_DOCUMENT_TOKEN_TO_BE_REPLACED