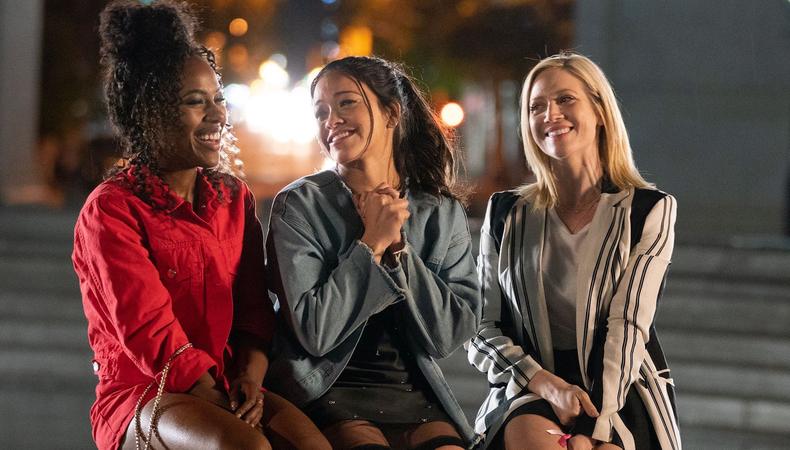 Jennifer Kaytin Robinson likens the experience of her directorial debut to that of a pumped-up slumber party. “It was honestly like the best 28-day sleepover of my life—it truly felt like a middle school–style sleepover where I just got to hang with my best friends,” she marvels.

Robinson’s “Someone Great,” which she wrote and directed, is an updated take on romantic comedies that will undoubtedly be a pajama party favorite. It follows Jenny (Gina Rodriguez) as she goes on a bender with her best friends (played by DeWanda Wise and Brittany Snow) to heal the wounds of a breakup. “This is me living my best Nora Ephron life,” says Robinson of the film, which she describes as “Drunk History” meets “500 Days of Summer.” But while “Someone Great” contains all the elements of the greatest rom-coms—montage sequences, an epic soundtrack, a New York City setting—its central love story goes for the unexpected. “I really wanted to center it [as] a story about the romance between women and their friendship, because that really is the rom of this com if you boil it down.”

READ: Gina Rodriguez Nailed This Audition (but Didn’t Get the Part)

MTV’s “Sweet/Vicious,” which Robinson created, was the stepping stone to “Someone Great” and in part prepared the filmmaker for her first feature. But she also credits her collaborators at Netflix and the cast and crew for being open and answering any questions she had along the way. “It was an extremely nurturing environment for me, especially stepping into this role for the first time.”

One of her biggest takeaways from the process was the importance of setting aside time for herself at the start of each day. “I would recommend this to every director, especially first-time directors,” Robinson says. After the rehearsal of the first scene, and while the director of photography was setting up, she would sequester herself in a corner and take 10 minutes to look at the script, meditate, and focus on herself as a person—not as the writer or director. “I think that tends to get lost when you are moving as fast as you’re moving when making a film.”

Her ethos of being grounded and grateful extended to the cast and crew. “There were 74 women in front of and behind the camera,” she says. “I think women foster an environment that makes the actors feel safe to play around and make mistakes—and that is what I wanted to bring to this as a director.”

She also brought her past experience as an actor to the director’s chair, noting that the actor-director relationship is a two-way street. “My style is not to give a million notes up front and try and mold the actor into exactly what I want to be or what I thought in my head,” she explains. “That inhibits the actor from doing what you hired them to do, which is to bring part of themselves to the role.”

Robinson points to a particularly playful day on set shooting an improvisational scene between Rodriguez and co-star Michelle Buteau. “There’s one take where Michelle looks at Gina and says something incredibly crass, and Gina straight up did a very genuine spit take. She had just taken a swig from her fake alcohol bottle and spit it all over the place,” Robinson recalls, laughing. The month-long shoot was “that a million times,” she adds. “It was all of us standing behind the camera just desperately trying not to laugh. It was such an amazing environment, where every day truly felt like the best day.”

For those looking to follow in Robinson’s footsteps as a filmmaker and creator, she advises that her successes haven’t happened overnight. “Be the captain of your own ship,” she advises to those looking to pen their own scripts. “Knock on those doors, write what you believe in, and stick to your guns.”

Want to hear more from creators of film, TV, and theater? Check out more interviews here!