TV to Come: Mark Your Calendars for These March Premieres 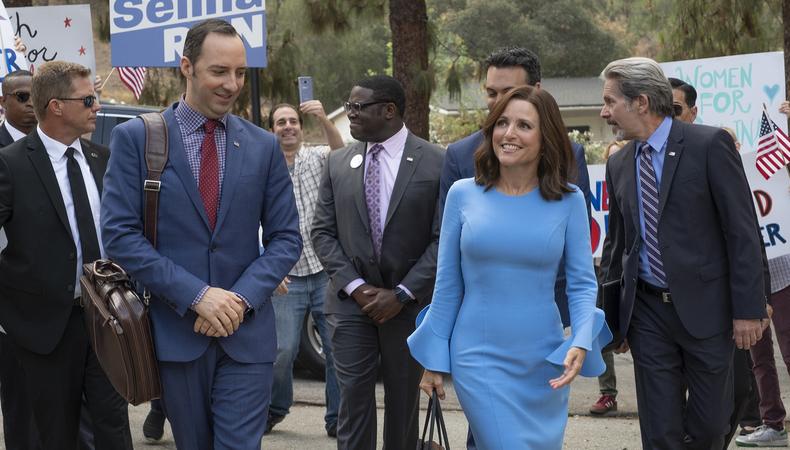 March brings plenty of shows to binge-watch on those last cold days of winter! Both streaming services and traditional broadcast networks offer new and returning series to warm us up: in a month rife with comedies, critical darlings “Veep” and “Barry” return to HBO; FX debuts its much-anticipated “What We Do in the Shadows,” a mockumentary about supernatural roommates; while NBC touts the return of “Good Girl” and the latest from producer Michael Schur, “Abby’s”; and Netflix drops the last episodes of the fifth season of “Arrested Development.”

More into procedurals and dramas? ABC debuts its newest foray into the legal world with “The Fix”; Amazon offers up British series “The Window” starring Kate Beckinsale and the fourth season of “Tin Star”; while the streaming arm of CBS launches the second season of Christine Baranski’s “The Good Fight.” PBS offers up the eighth season of “Call the Midwife,” while Paul Giamatti and Damian Lewis return to “Billions” on Showtime. No matter what you are looking to watch, March 2019 has got you covered.

ABC
The legal drama “For the People” returns for its second season on March 7th, while ABC’s newest legal drama, “The Fix,” debuts on March 18th; this program is produced with the help of famous former prosecutor Marcia Clark, and it stars Robin Tunney, Adewale Akinnuoye-Agbaje, Adam Rayner, Merrin Dungey and Marc Blucas.

Amazon Prime Video
Amazon debuts British series “The Widow,” starring Beckinsale, on the first of the month. Crime drama “Tin Star” returns on the 8th, and the fourth and final season of BAFTA-nominated sitcom “Catastrophe,” starring Rob Delaney and Sharon Horgan, premieres on the 15th.

FX
Towards the end of the month, FX debuts its newest comedy, “What We Do in the Shadows,” adapted from the 2014 Taika Waititi and Jemaine Clement film of the same name. The mockumentary-formatted show follows the lives of a group of vampires living in New York City.

HBO
The premium channel closes out the month with season premieres of two of its most critically acclaimed and beloved comedies; “Veep” and “Barry” return on the final day of the month. “Veep” has been off the air since 2017, meaning last year star Julia Louis-Dreyfus missed out on her regular leading comedy actress Emmy. For the Armando Iannucci political comedy’s final season, she’ll rejoin the Emmy race, alongside last year’s male comedy actor winners Bill Hader and Henry Winkler.

History
March 25 brings the second season of historical drama “Knightfall,” which stars Tom Cullen, Jim Carter, Pádraic Delaney, Simon Merrells, and Julian Ovenden in a recounting of the persecutions of the Knights of Templar in the Middle Ages.

Hulu
On the 15th, the newest Lorne Michaels-produced comedy, “Shrill,” debuts on the streaming service. The show features Aidy Bryant of “Saturday Night Live” in the starring role of the Lindy West memoir adaptation. Another debut on the 20th, “The Act,” is a crime anthology based on true events starring Patricia Arquette, Joey King, Chloe Sevigny, Annasophia Robb, and Calum Worthy. And the third season of Canadian crime drama “Cardinal” joins the streaming network on the 22nd.

NBC
Comedy-drama “Good Girls,” which stars Christina Hendricks, Mae Whitman, and Retta, returns March 3rd. The Season 2 premiere of “A.P. Bio” airs on the 19th. Also on the 19th, NBC hopes to capture some of the magic of their beloved ensemble drama “This is Us” with the new program, “The Village,” which follows the lives of residents of a Brooklyn apartment building. On the 28th, Schur, the man behind “Parks and Recreation” and “The Good Place,” debuts his newest comedy, “Abby’s.”

Netflix
The streaming service kicks off the month with “Northern Rescue,” a Canadian drama starring William Baldwin and Kathleen Robertson. Australian political thriller “Secret City” makes its American debut on the streaming service on March 6th. The next day, a new horror drama, “The Order,” premieres, centering on an ongoing battle between werewolves and practitioners of black magic. On the 8th, “After Life,” a dark British comedy starring veteran comedy actor Ricky Gervais, debuts its first season’s eight episodes, all of which are executive produced, directed, and star Gervais.

Mitchell Hurwitz’s legendary comedy series “Arrested Development” returns March 15 with the second half of its fifth season. That same day, Idris Elba’s “Turn Up Charlie” debuts; the new series stars Elba as a DJ who works as a “manny” to pay the bills. Sci-fi drama “The OA” returns on the 22nd for its second season, and on the 29th, “Santa Clarita Diet,” which stars Drew Barrymore and Timothy Olyphant, comes back for its third season. Also debuting on the 29th is Netflix’s latest British import, “Traitors,” a period spy drama set in post-war Britain and starring Emma Appleton, Keeley Hawes, Michael Stuhlbarg, Matt Lauria, and Luke Treadaway.

PBS
Season 8 of the beloved British period drama, “Call the Midwife,” makes its stateside premiere on the month’s last day. Also airing in the U.S. for the first time, Ruth Wilson’s miniseries “Mrs. Wilson” debuts on the 31st as well.