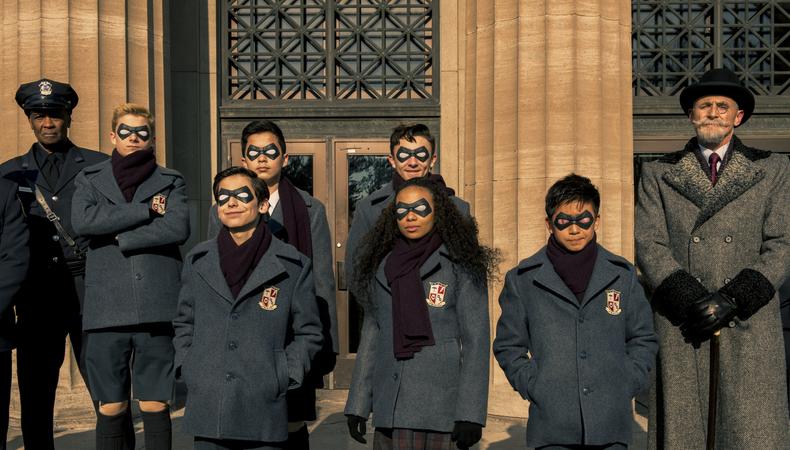 For a short month, February sure packs a lot of punch.

From the Super Bowl to the Oscars, this month plays host to some of our favorite live televised events. But don’t leave scripted TV out in the winter cold. Amazon will launch “Hanna,” a new action series following the daughter of an ex-CIA operative, post-Super Bowl. ABC will air its newest drama, “Whiskey Cavalier,” after the Oscars on the 24th. In addition to those post-event debuts, February welcomes several highly anticipated shows, including BET’s “American Soul,” centered around the creation of legendary TV show “Soul Train”; the newest from DC Universe, “Doom Squad”; Jordan Peele’s latest series “Weird City” on Youtube Premium; and “Miracle Workers,” starring Steve Buscemi and Daniel Radcliffe.

ABC
On Feb. 24, the Alphabet Network takes advantage of the post-Oscar time slot, premiering its newest drama “Whiskey Cavalier,” which stars Scott Foley of “Scandal” and Lauren Cohan of “The Walking Dead” as the heads of a task force led by the FBI and CIA. The show will then return to its regular time slot of Wednesdays at 10 P.M.

Amazon Prime Video
Amazon kicks the month off with the newest on-screen Agatha Christie adaptation, “The ABC Murders.” The BBC One mystery debuted last month in the UK and stars John Malkovich as the famous detective Hercule Poirot alongside Rupert Grint, Eamon Farren, and Andrew Buchan. On the 3rd, “Hanna,” a new action drama based on the 2011 film of the same name, joins the streaming network timed to follow the Super Bowl.

BET
On the 5th, “American Soul” premieres. The program features Sinqua Walls as the creator and host of Soul Train, Don Cornelius; the cast also features Kelly Rowland of Destiny’s Child in a recurring role as Gladys Knight. In addition, the classic 1992 Eddie Murphy film “Boomerang” gets a sequel in the form of a new scripted series, which airs its first episode on the 12th.

CBS
Matt LeBlanc returns for the third season of his sitcom “Man with a Plan” on the 4th; on the 16th, “Ransom,” which stars Luke Roberts as a hostage and crisis negotiator, also launches its third installment.

DC Universe
The still-new DC Universe streaming service brings its newest live-action comic book series, “Doom Patrol,” to the screen this month; it will begin streaming on the 15th, with episodes to be added weekly.

FOX
On the 15th, the legal drama “Proven Innocent” premieres on this network. The program takes place in a law firm that represents wrongfully convicted clients, and stars Kelsey Grammer, Rachelle Lefevre, Vincent Kartheiser, Russell Hornsby, and Nikki M. James among others.

FX
Pamela Adlon reprises her role as Sam Fox, for which she’s received both Emmy and Golden Globe nominations, in the third season of her dramedy “Better Things” Feb. 28. Adlon directs all of the season’s 12 episodes, which feature appearances by all-stars Matthew Broderick, Sharon Stone, Judy Reyes, and Doug Jones.

‘In the Envelope’ Podcast: How to Do It All, According to Pamela Adlon

Hulu
Hulu’s newest series, “PEN15,” debuts on the 8th. The new comedy stars Anna Konkle and Maya Erskine, the show’s creators, as 7th grade versions of themselves; the rest of their classmates are played by teens.

NBC
“The Enemy Within,” a new thriller starring Jennifer Carpenter of “Dexter” fame and Morris Chestnut, most recently of Amazon’s “Goliath,” as a CIA-FBI duo, premieres on the 25th.

Netflix
The streaming service kicks off the month with “Russian Doll” on the 1st; Natasha Lyonne stars in the comedy-drama, which she created with Amy Poehler and Leslye Headland. The critically acclaimed “One Day at a Time,” starring Justina Machado and Rita Moreno, returns for a third season on the 8th. On the 15th, a 10-episode season of “The Umbrella Academy,” adapted from Gerard Way’s graphic novel, will join the streaming service. The live-action adaptation stars Ellen Page, Tom Hopper, Mary J. Blige, Emmy Raver-Lampman, Kate Walsh, and more.

Netflix will also add a bevy of foreign dramas this month, including second seasons of Finnish “Bordertown” on the 2nd, Belgian “The Break” on the 9th and Italian “Suburra” on the 22nd, alongside new shows, including Columbian “Siempre Bruja” on the 1st and Spanish “Unauthorized Living” on the 8th.

YouTube Premium
Oscar-winning filmmaker Jordan Peele’s newest creation, “Weird City,” a science-fiction-comedy series, premieres on the 13th. It features a different ensemble for each episode, with all stories taking place in the future city of Weird; the cast includes Mark Hamill, LeVar Burton, Michael Cera, Rosario Dawson, Ed O’Neill, and Laverne Cox, among many others. Don’t miss it.