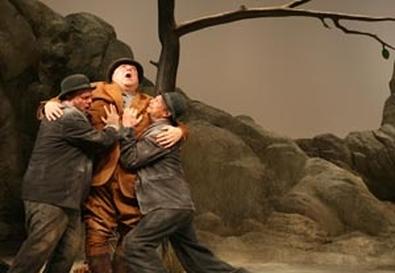 Waiting for Godot is probably the most difficult modern classic to act or stage. Samuel Beckett's existentialist cry of despair spotlights the tedium humans face as they realize that their pursuits and objectives are meaningless and they only have minor distractions to occupy them until the darkness of death descends.

As everyone who read it in college knows, the action consists of two tramps, Estragon and Vladimir, waiting in a nameless desert for a mysterious figure named Godot to appear, perhaps to offer them a job, perhaps to give their lives meaning. We don't know, and neither do the bums, who encounter a pompous blowhard named Pozzo and his slave, Lucky, and then a small boy sent to inform them Godot will not come today but will definitely show up tomorrow. They pass the time telling each other jokes, playing word games, singing songs, and contemplating suicide. The events repeat themselves in the second act with slight variations, suggesting this waiting game stretches on through eternity. It's a play about boredom, but if the cast and director focus on that, the production becomes boring—a trap many have fallen into.

In the current Roundabout Theatre Company production at Studio 54—the former disco is an ironic location for this desolate comedy-drama—director Anthony Page and his brilliant cast neatly sidestep that pitfall and dance a merry gig around it. Nathan Lane and Bill Irwin, two of our most skilled stage clowns, find the zestful comic joy and soul-crushing despair in Beckett's sorrowful everymen. Dressed in rags by costume designer Jane Greenwood and covered with dirt, wounds, and scars, they look as if they've been through hell—in most productions, these facial details are overlooked and the tramps appear to be neatly shaved actors in funny clothes.

Lane subdues his self-referential shtick to zero in on Estragon's quest for comfort and rest. We can feel his physical and emotional pain as he searches for meaning in his life and a pair of boots that don't pinch his feet. Irwin gives the more intellectual Vladimir an endless variety of line readings, movements, and tics to express his confusion and yearning for clarity in an unclear world.

But the real revelation here is John Goodman as the self-important Pozzo. Resembling a low-rent Sydney Greenstreet, Goodman dominates his scenes as Pozzo imposes his gigantic ego on the clueless tramps. When he returns as blind as a bat and falls in a heap in the second act, he resembles an enormous paralyzed bullfrog. He's unable to move but still demands to be the center of attention. As the enigmatic Lucky, John Glover endows every movement and glance with pages of subtext. At one moment he is a feral animal, snarling and biting at strangers, the next an unstoppable orator spilling over with polysyllabic nonsense when Pozzo commands him to "think." Even the little boy, played by Cameron Clifford at the performance attended (he alternates with Matthew Schechter), has a rich inner life.