The actor reveals how he charted his own path and the process of taking on Vincent van Gogh in “At Eternity’s Gate.”

Willem Dafoe refuses to give in to the mechanical. Sitting with the 63-year-old Oscar nominee over lunch at the Whitby Hotel in November, he laments actors—and, perhaps, a less experienced iteration of himself—who fall into the trappings of craftwork; those who “passively go through steps” or want to “display what a great actor they are.”

“If you get into that head too much, then you start indicating everything,” he says. “There are all kinds of movies—sometimes that becomes useful. But if you do it as a standard practice, I think you just become a machine.” 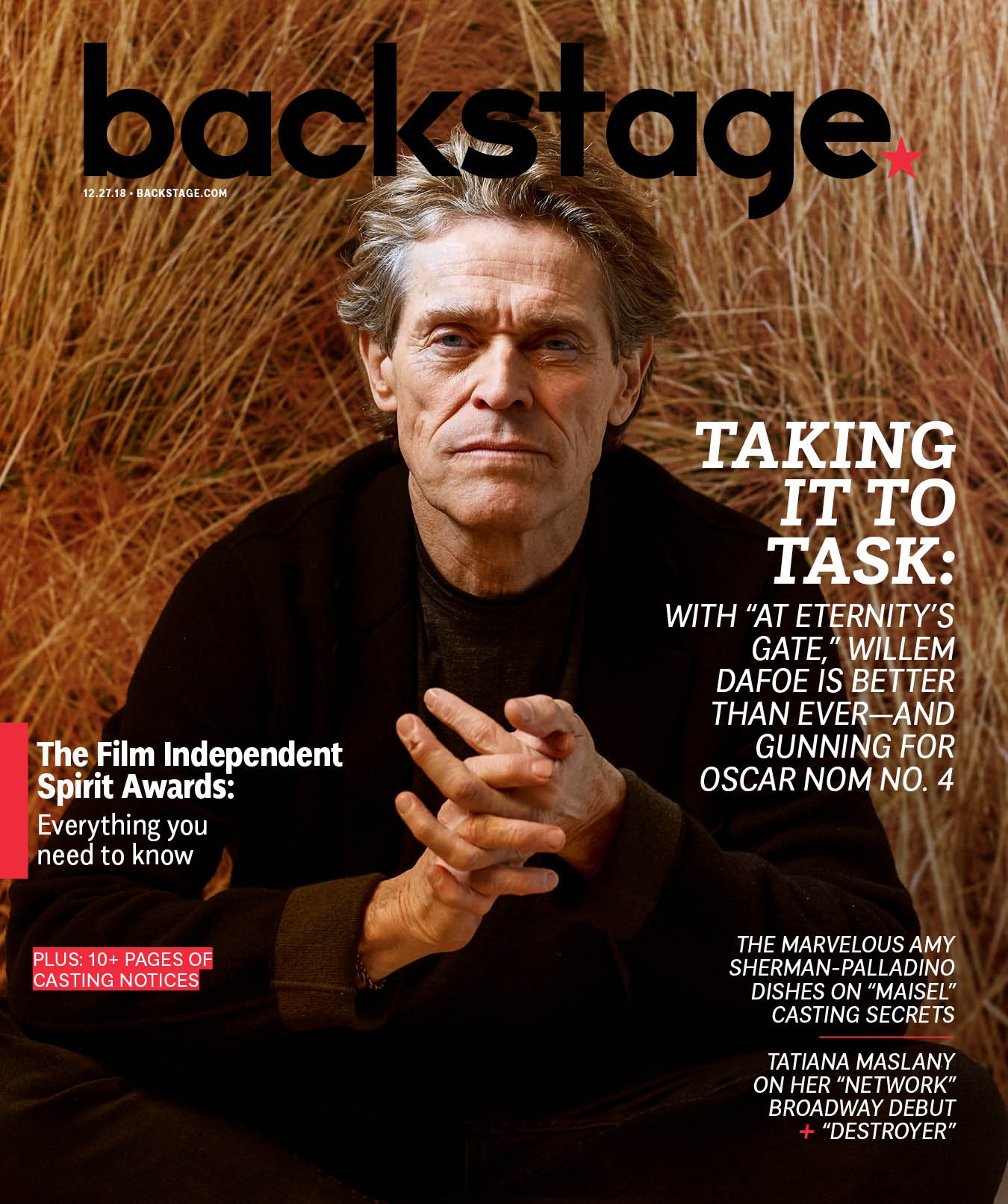 That’s not to suggest, of course, that the man lacks craft. In his words: “I’ve just been doing this long enough that I have very strong instincts, but craft isn’t where I live.” So where, then, does Dafoe the actor live? The better question may be: Where does he want to build a home?

“I like strong actions; I like extreme situations. Usually, my choices are built on adventure and learning something. If something’s exotic and strong, it’s a good life experience, so I go toward them,” Dafoe, a vegan, says between bites of his salad. That much is clear from the roles he’s been known best for since his 1986 breakout in “Platoon”—misadventuring with Wes Anderson in “The Life Aquatic” and “The Grand Budapest Hotel”; flying high as the Green Goblin in “Spider-Man”; bringing a quiet gravitas to those scraping by in “The Florida Project”; putting his own spin on a well-trod genre in “Shadow of the Vampire”; and, most recently, portraying Vincent van Gogh, the man behind some of the most recognizable works in the art history canon. Whether taking on the unknown or the extremely well-known, Dafoe’s work is a towering example of performance not shackled by fear, overanalysis, or bravado. 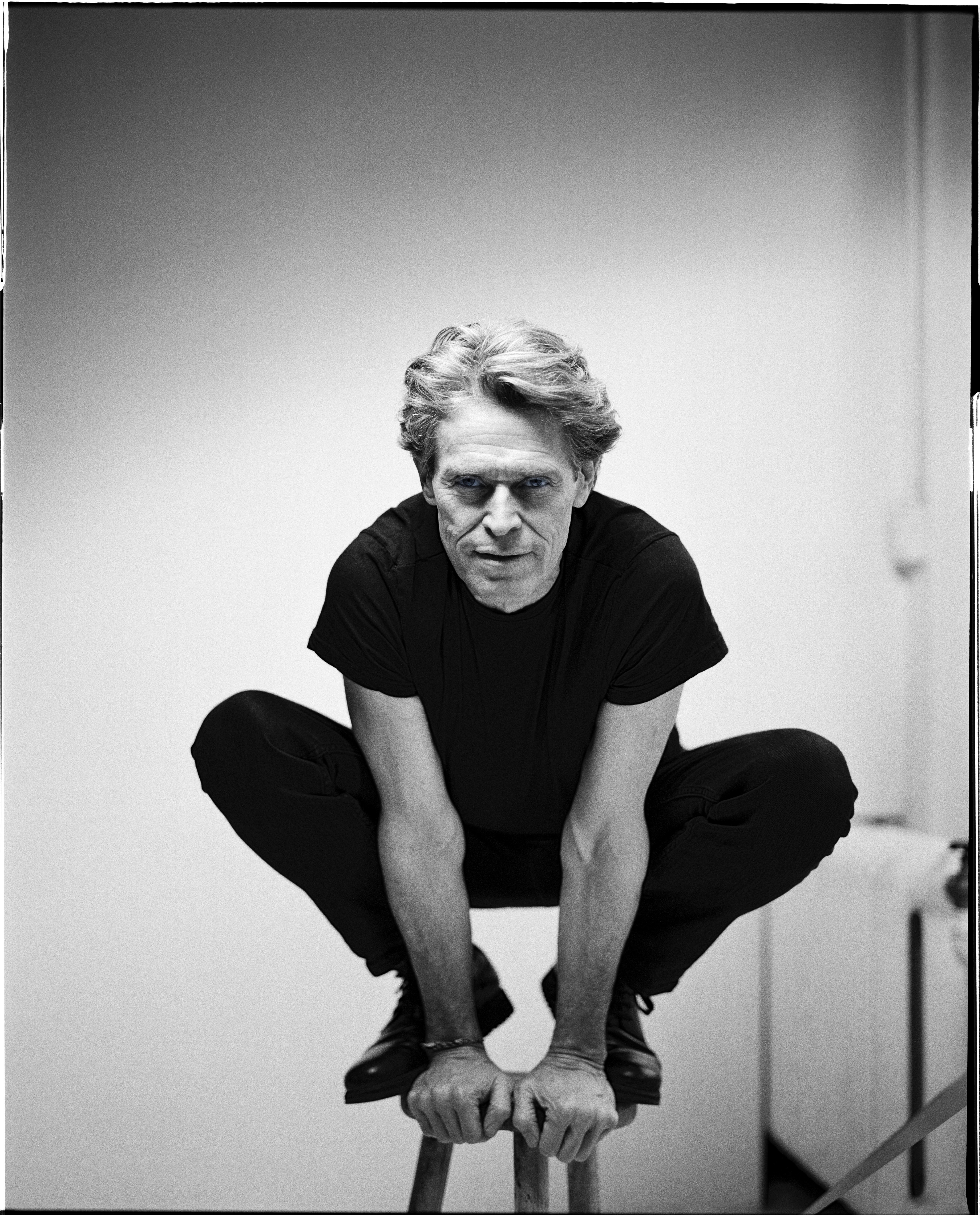 To hear Dafoe speak of his approach to performance—one that seems as much a measured practice as a psychological process—it’s not a character breakdown in black and white that comes to mind, but a Venn diagram. The left circle is the Dafoe we know, while the right is the character at hand; their shared characteristics sit centered between the two. In addition to the trained and ingrained preparatory work that’s inherent to any actor’s method, a component of Dafoe’s success is his temporary shedding of the singular attributes situated in the left circle, those that set him apart from the character. It’s a matter of putting limitations on his personal self so that the truth of the other can come to the fore.

That’s why, for instance, he’s so keen on traveling and shooting abroad. (We’re meeting this afternoon in Manhattan while he’s on leave from filming Disney’s true-story dogsledding drama, “Togo,” in Calgary, Alberta.) “While you’re shooting on location, you have left your life behind because you’ve left your habits behind by moving to a new place—unless you bring your music, you eat the same food, you live the same way, and bring your whole family with you, which I don’t do. It changes your orientation,” he says. “You make a new life for a period of time under a structured circumstance.”

READ: Willem Dafoe Explains Why You Shouldn’t Map Out Your Career

It makes sense then that the veteran actor would gravitate to a role like van Gogh, the insular, often misunderstood artist who didn’t receive his long-sought recognition until after his death in 1890 at the age of 37.

Despite obvious discrepancies in age and artistic medium, the troubled artist of Julian Schnabel’s “At Eternity’s Gate” seems a role Dafoe was meant to play. In this unconventional and affecting biopic, he captures the “Starry Night” Post-Impressionist painter in his final days with precision and triumph. The performance earned Dafoe his third Golden Globe nomination and has put him on many shortlists for what would be his fourth Oscar nomination later this season. (Voting begins Jan. 7, 2019.)

Of filming and living in France, particularly in Auvers-sur-Oise, the commune outside of Paris where van Gogh died after suffering a gunshot to the chest, Dafoe says the experience was “incredible. You’re approximating his perspective; you can see some of the landscapes from his paintings and then you can visit them so they’re alive…. You feel his spirit.”

Learning to paint, which in several scenes from the film he had to do in real time, similarly rooted Dafoe in van Gogh’s body. “It was very important to give me the physical experience to be able to relate to some of the things he was talking about. I can relate as someone who’s interested in art, some I can relate to as a human being. But once I started painting, it was more complete.”

The effort of living in new locales and learning new skills, Dafoe believes, pays off in his final product. 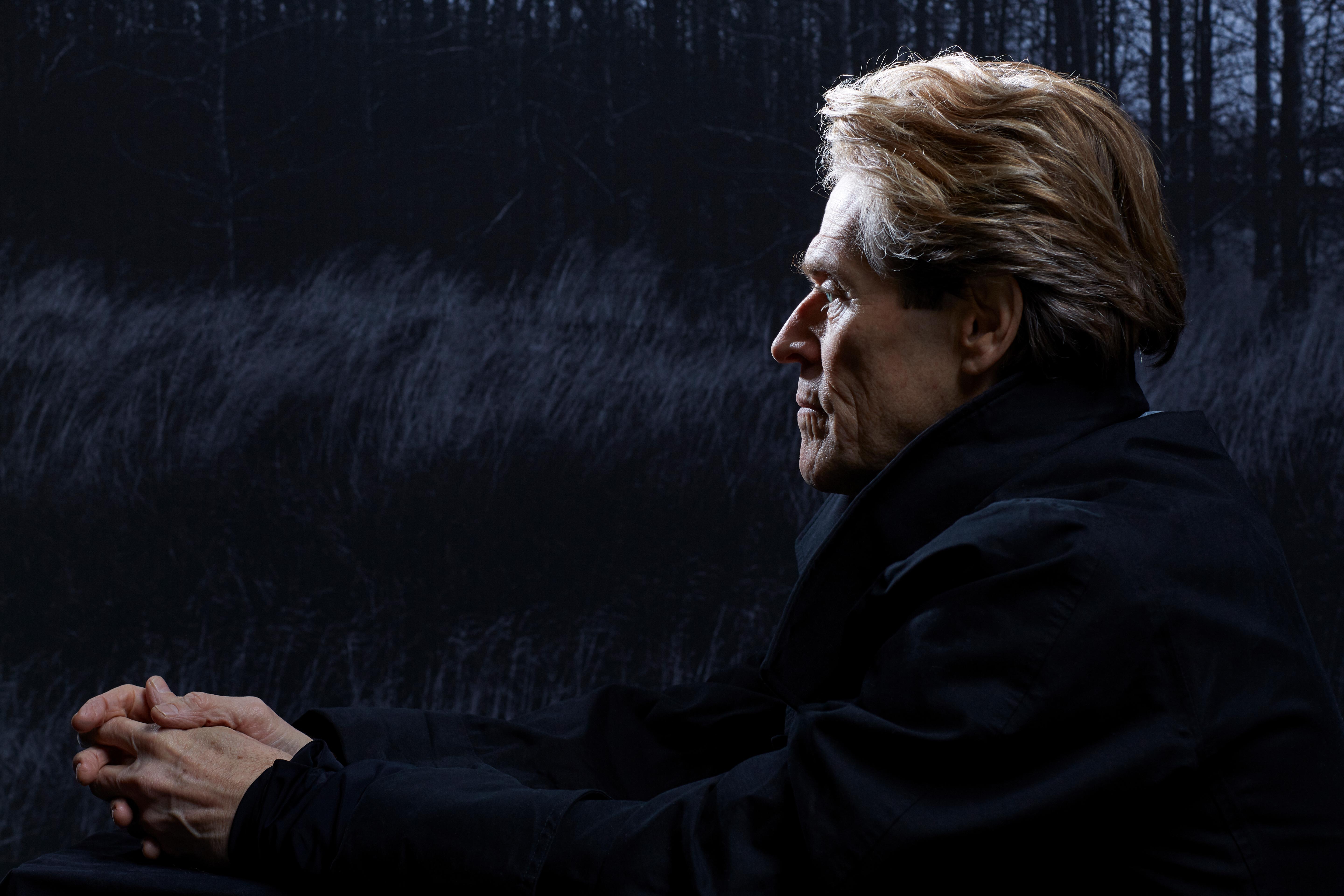 “Particularly as I get older, I realize what you put into this is what comes out. I feel that so deeply: If you have the volitional thing of wanting to pretend and change and find a new way of looking at something, then it can be quite exciting and something can happen to you that people can see as it’s unfolding [onscreen]. Then it can be something that’s like the approximation of a life; you have a performance that’s alive rather than canned.”

Of course, the luxury of traveling the world and choosing his work project to project is one that benefits Dafoe after years of hard work and struggling to be seen and heard. Dafoe recalls moving to New York (“the big bad city”) in 1976 and working as a carpenter and a life class model while finding his niche in avant-garde downtown theater, eventually co-creating the famed Wooster Group and snowballing his experience from there.

“I was working at the theater with no money, working every day in a very rough situation. It’s romantic; I felt like an artist,” Dafoe says. “I still have that to some degree, [but] now that I’m older, you think more about peace and clarity than you do confrontation and anger and angst.”

While he knows that “everything’s changed so much” in the New York market over the last 40-some-odd years, the overarching advice Dafoe has for actors still finding their footing is insight gained firsthand.

“Look around, see what you like, and get close to it. I still believe in that,” he says. “Get around people who excite you, who inspire you, who turn you on. Everybody’s different, but that worked for me because I find that when I’m working well, or when I’m involved with people in an intense way, you don’t worry about ‘career,’ you don’t worry about money. You’re satisfied with feeling alive and collaboration and friendship and interchange.” 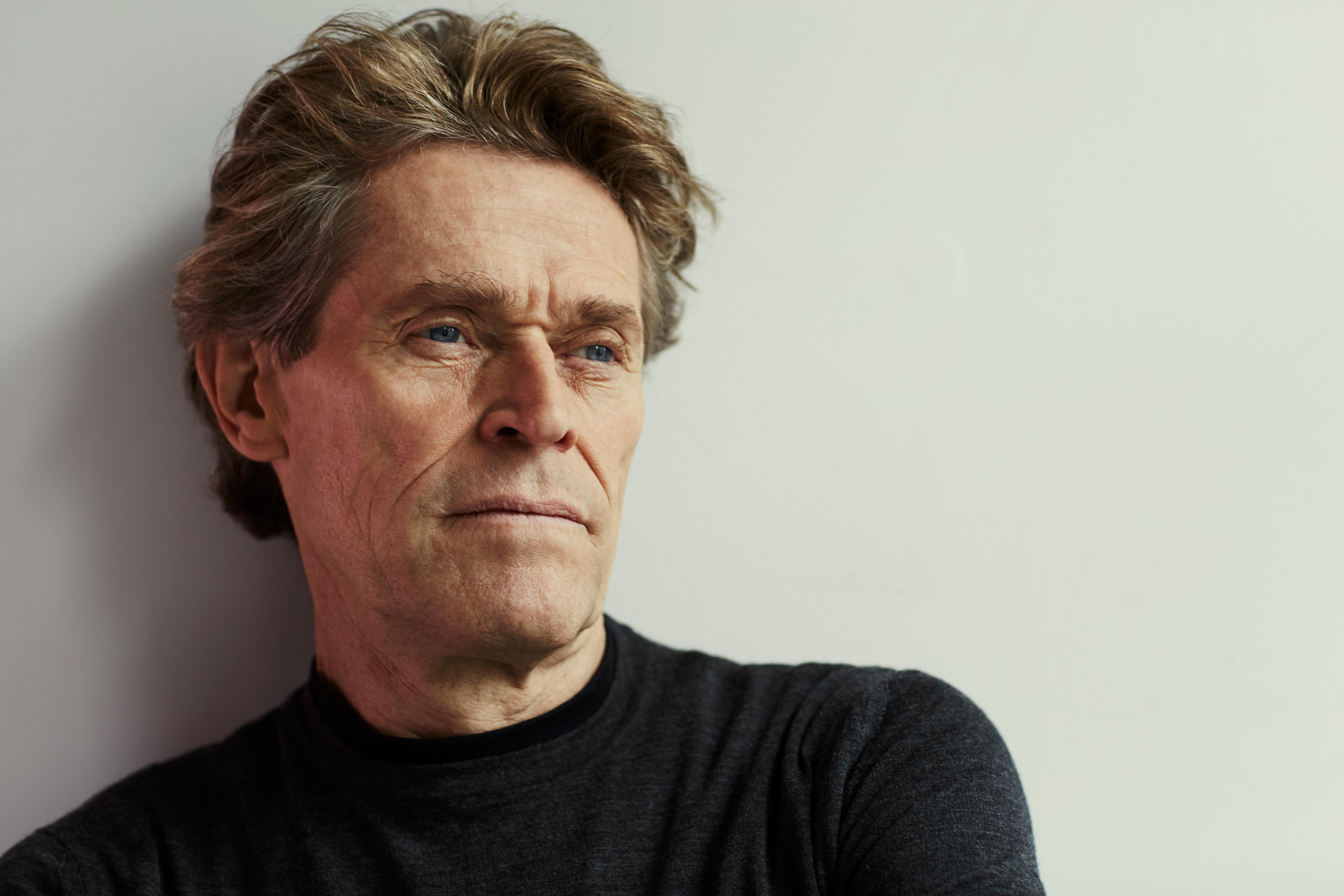 Dafoe’s most practical advice for both career and performance comes, however, when he reflects on what he learned from inhabiting van Gogh and how Schnabel taught him to “paint the light.” Where the light falls in a still life is separate and distinct from the central object—but just as important.

“You put marks down and those marks correspond to each other—they start to talk to each other and they make something else. That has a relationship in performing,” Dafoe explains, and it can also be applied to the big picture of life as an artist. “When you make a series of actions, they all accumulate in a story, they all accumulate in a life. But each one has to be at its integrity. You can’t think about the whole life when you’re doing the one mark. You’ve got to go one step at a time.”

Photographed by Stephanie Diani on November 16 in NYC; Groomed by Amy Komorowski

Benjamin Lindsay
Benjamin Lindsay is managing editor at Backstage, where if you’re reading it in our magazine, he’s written or edited it first. He’s also producer and host of a number of our digital interview series, including our inaugural on-camera segment, Backstage Live.
END_OF_DOCUMENT_TOKEN_TO_BE_REPLACED