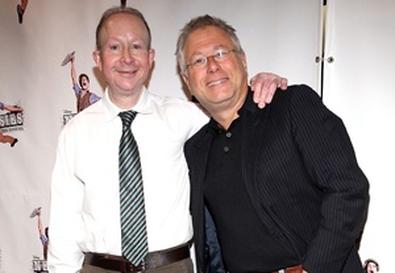 “It was like a gift,” says Jack Feldman of being able to revisit the material. The composer-lyricist team added six new songs for the Paper Mill production and switched out two of them for Broadway. With the help of book writer Harvey Fierstein, the creative team has also added new plot points and characters.

“Our first attempt to adapt it, we really were determined to set it in ragtime music and more legit Broadway music,” says eight-time Oscar winner Alan Menken, who also composed the music for Broadway’s “Sister Act” and the upcoming “Leap of Faith.” “It clearly didn’t work. And we have to go back and just use the rock ’n’ roll, R&B energy that somehow works, at the turn of the century.”

Menken says it wasn’t always easy. “There are plenty of moments that drive me crazy, like the Pulitzer song,” he says about having the tight-fisted Joseph Pulitzer singing. “It isn’t a character that wants to sing necessarily, but we need him to sing. So we had to walk a line there. Also, how we dealt with the love story [between Jack and Katherine], and how much of a love story. That’s a balancing act.”