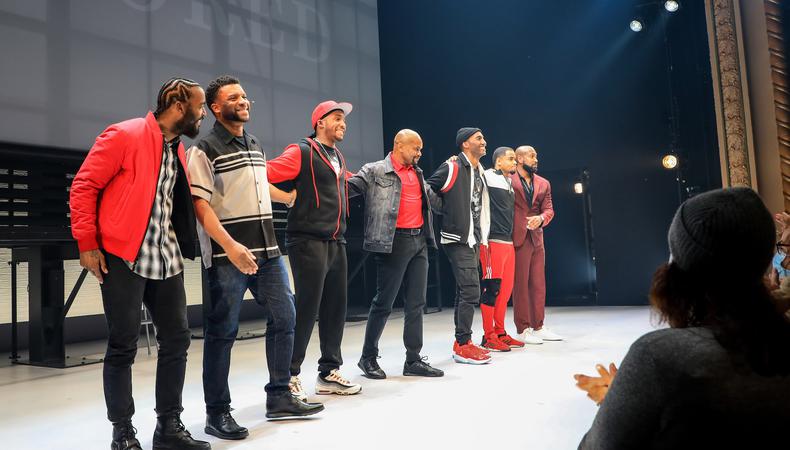 Omicron has sent Broadway into a tailspin. Every day, there’s news of productions closing temporarily or permanently. “The Music Man” starring Hugh Jackman paused performances after the actor tested positive for COVID-19, and “Mrs. Doubtfire” announced it was shuttering for nine weeks. Other shows, meanwhile, closed permanently.

But it doesn’t mean Broadway is going to shut down again. “No one’s going anywhere,” said Hunter Arnold, lead producer of “Hadestown” and an investor in “Dear Evan Hansen” and “Moulin Rouge!” He admits that the news lately has been “pretty brutal”; but most shows are still onstage, and safety is of “primary importance.”

“The safety protocols that are put in place here are absolutely top of the line,” agreed actor Tony LePage, a swing in “Come From Away” on Broadway. “We’re really doing our due diligence to make sure that this is a safe environment for the audience, for the cast, and everyone backstage,” he said. According to LePage, a private company provided vaccine boosters and ongoing daily PCR testing for the cast and crew.

“We were doing very well. And that virus came in, and it just ravaged our cast. ”

The CDC recommends testing vaccinated individuals only if they show symptoms of COVID-19, a policy that has been taken up by the NFL and many hospitals. Broadway, on the other hand, has required all cast and crew to be fully vaccinated, and many shows are doing a minimum weekly PCR test, with some testing daily. Anyone who is not performing onstage is required to be masked. Audiences are also required to be masked and vaccinated, and Broadway shows have largely stopped selling food and drink.

If Broadway performers do test positive, they are placed on paid sick leave and do not return to work until they test negative. “Until we’re absolutely certain that it’s not truly putting lives at risk, I don’t want somebody that’s asymptomatic to be standing downstage center and having saliva particulate flying all over my audience,” said Arnold. “People’s lives are worth a lot more than two extra weeks of musical revenue, in my book.”

Historically, Christmas week is the most lucrative time of the year for Broadway, with increased ticket sales thanks to an influx of tourists and locals on holiday break. During the 2021 holiday, of the 32 shows running on Broadway, 10 canceled performances, citing COVID-19 outbreaks among their actors and crew members. According to reports from the Broadway League, Broadway grosses fell by 26%. 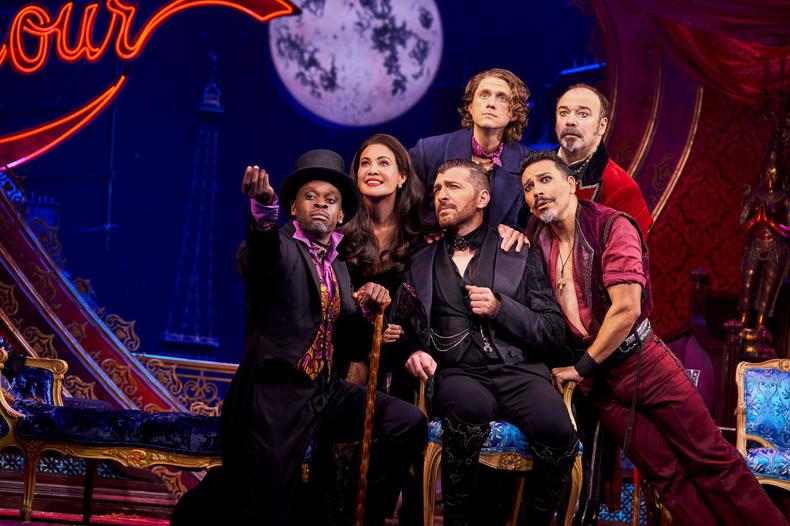 The cast of "Moulin Rouge!"

The highest-profit show to announce a weeklong pause was “The Music Man,” after star Jackman tested positive; it resumed performances Jan. 6.

Arnold did admit that, financially, it’s been painful. Canceling even four performances of a musical can lead to up to a million dollars in losses, he said. But many long-running musicals have reserve funds from their pre-pandemic profits and federal grants, giving them enough leeway to shutter for a few performances.

Not every production is so lucky. A number of shows have closed, including “Thoughts of a Colored Man,” “Waitress,” “Chicken & Biscuits,” and “Jagged Little Pill.” Recently, “Mrs. Doubtfire” announced that it will take a nine-week pause, laying off 115 members of its cast and crew in the interim.

“Thoughts of a Colored Man” was scheduled for a limited run through March 13. The show was close to recouping its $5 million investment when Omicron hit. “We were doing very well. And that virus came in and it just ravaged our cast,” said producer Brian Moreland of the seven-person show.

“People’s lives are worth a lot more than two extra weeks of musical revenue, in my book.”

On Dec. 21, three cast members were out simultaneously, one because of a positive test. Playwright Keenan Scott II and the show’s two understudies stepped in to keep the show running. Then, two other cast members tested positive, and “Thoughts of a Colored Man” closed on Dec. 22.

Particularly for limited-run productions like Scott’s play, withstanding an extended closure—with mounting expenses, paying cast and crew, and no revenue to offset costs—can spell an early closing. “You have to be able to pull that money from your reserve. It wasn’t possible to pull that much for it,” said Moreland.

Despite the closing, Moreland doesn’t believe there will be many more coronavirus-induced closures in the future. “It looks like we might have gotten through the worst of it,” he said. “And I think that people are able to prepare for it now. You see that it’s coming, and you’re able to make adjustments to your casts.”

Moreland cited “Come From Away,” “Hamilton,” “Chicago,” and “Wicked” calling in not just understudies, but former cast members and actors from the shows’ touring companies to come fill in on Broadway. So why don’t many Broadway productions have enough understudies to stay open?

Moreland admits that if he knew that Omicron was coming, he would have hired more understudies for “Thoughts of a Colored Man.” (Plays tend to have fewer understudies than musicals do, since, prior to the pandemic, it was “extraordinarily rare” for multiple members of the cast of a play to be out sick.)

The last two years have made understudies and swings more necessary than ever. “I would probably have seven men onstage performing and seven men backstage in the wings,” said Moreland. “It is a crazy moment.” 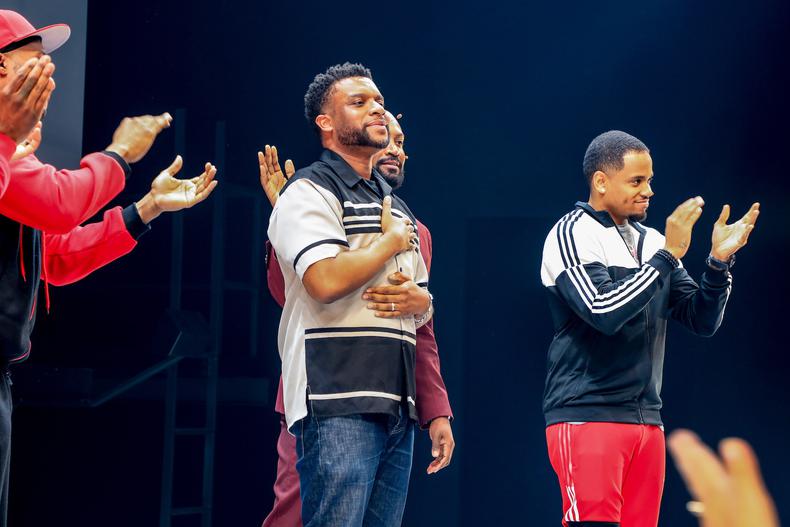 "Thoughts of a Colored Man" playwright Keenan Scott II, who had to step into a role after an actor tested positive for COVID

LePage is a swing for five roles in “Come From Away.” Over the holidays, he found himself playing different characters every night—sometimes with only an hour’s notice, for parts he hadn’t played in years. “I’m not going to say it wasn’t stressful; there’s no question it was,” he says. “When it comes down to it, that’s our job. I was happy that I stayed healthy.”

A show’s crew is also a factor when it comes to cancellations. “Company,” which Arnold is an investor in, recently canceled performances because several crew members tested positive for COVID-19, and there weren’t enough left to ensure the show ran smoothly.

“The automation in [the ‘Company’ set] is unbelievable,” said Arnold. “But if you don’t have [an IATSE] Local One crew member who knows how to operate that automation, it would be unsafe for you to put actors in the way of that thing. There are no unimportant players on Broadway.”

Both Arnold and Moreland say that while COVID-19 is leading to shows shutting down permanently, closures are part of the normal course of Broadway. “There are shows that are ending their life cycle, and there are new shows that are loading in,” Moreland explained. “That’s normal in our ecosystem. It’s just compounded by this variant.”

Audiences also seem to be taking the changes in stride. Some who had their tickets canceled over the holidays are rebooking for the spring. As for visiting out-of-towners who find that shows they had tickets to have been canceled, producers hope they will instead see one of the dozens of other Broadway and Off-Broadway shows still running. Broadway League president Charlotte St. Martin told the Hollywood Reporter that despite cancellations, Broadway has “absolutely no plans to shut down.” “Frankly, I’d rather lose a performance or two every two or three weeks than spend 18 months completely shut down,” said Arnold.

Moreland was also optimistic. He’s producing a revival of “American Buffalo” starring Laurence Fishburne, Sam Rockwell, and Darren Criss in the spring. “I’m hoping that by the end of February, we’ll have reached the peak [of Omicron],” he said. “There’s a lot of exciting shows coming in the spring. The spring on Broadway is going to be extraordinarily robust and extraordinarily exciting.”