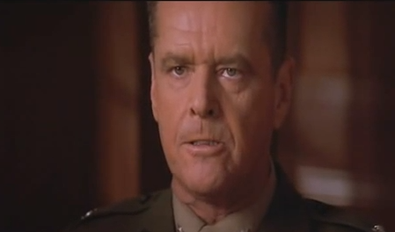 The monologue. It’s the time where an actor either rises to the occasion or crashes and burns (and usually takes the film with them.) When done right, the effect of the monologue can change our perspectives, be devastatingly terrific, riotous, or inspiring. And when done right, it does them all at one point or another. In no particular order, here are some monologues we really like, ranging from the funny to the tragic—but do not, however, take this as the end-all-be-all of great monologues. If you love some we didn’t put on this list, leave them in the comments!

Brad Pitt as Jeffrey Goines in “Twelve Monkeys”
It seems like Pitt’s character in “Twelve Monkeys” is in perpetual monologue mode, only adding to the greatness of his performance. While in a mental institution, his ramblings to Bruce Willis’ character James Cole on society’s gluttony and materialistic focus, punctuated with his vigorous shakes and ticks, makes us feel like the truth has inhabited the body of a crazy person. You know, because it has.

Jack Nicholson as Col. Nathan R. Jessup in “A Few Good Men”
Jack Nicholson goes off in this scene, famously shouting, “YOU CAN’T HANDLE THE TRUTH!” when pressed by Tom Cruise’s character. “Son, we live in a world that has walls and those walls have to be guarded by men with guns. Who’s going to do it? You? You, Lt. Weinberg?” As an actor, Nicholson is definitely holding the metaphoric gun in this scene, firing off shots that hit the bullseye every time.

Ellen Burstyn as Sara Goldfarb in “Requiem for a Dream”
Burstyn gives us one of the truest depictions of what drug use does to the ones closest to the addicts. Her role in “Requiem for a Dream,” starring Jared Leto, earned the actor a well-deserved Oscar nomination for the performance that delivers a mother’s distraught plea to feel needed and have a reason to go on—to be “somebody” to anybody. It’s a need fulfilled by pipe dream about being on a game show. “Soon, millions of people will see me and they’ll all like me,” she says. “I’ll tell them about you, your father, how good to us he was. Remember? It’s a reason to get up in the morning. It’s a reason to lose weight. It’s a reason to fit into a red dress. It’s a reason to smile. It makes tomorrow alright.” It’s all so utterly heartbreaking.

Kudos to both the writer for their powerful words, and Burstyn for her gut-wrenching delivery of them.

Christopher Walken as Captain Koons in “Pulp Fiction”
The culmination of Christopher Walken’s monologue in Quentin Tarantino’s classic film is so unexpected, it’s hilarious. And his deadpan delivery of such a ludicrous story makes it all the funnier. “So he hid it in the one place he knew he could hide something: his ass,” says Walken to a little boy about this watch he was now bestowing on him. “Five long years, he wore this watch up his ass. Then, he died of dysentery. He gave me the watch. I hid this uncomfortable piece of metal up my ass, two years. Then, after seven years, I was sent home to my family. And now, little man, I give the watch to you.”

He told the story of this watch so well, the kid was still eager to snatch it up despite the number of asses it was so well acquainted with.

Anthony Hopkins as Dr. Hannibal Lecter in “The Silence of the Lambs”
The five-time Oscar winning film that also landed a statue for Hopkins, is one that cuts to the bone. But there’s one scene in particular where Lecter cuts into Clarice with a few short sentences that reminds us why. “You know what you look like with your good bag and you cheap shoes? You look like a rube. A raw-scrubbed, hustling rube,” he says to Jodie Foster’s character. “Good nutrition has given you some length of bone, but you’re not more than one generation from poor white trash, are you, Agent Starling?” Ouch.

Mike Myers as Dr. Evil in “Austin Powers: International Man of Mystery”
This monologue tells us pretty much everything we ever need to know about Dr. Evil. Myers gives it all to the audience so nonchalant, because, you know, being put in a burlap sack and beaten with reeds is all “pretty standard,” really. “My father was a relentlessly self-improving boulangerie owner from Belgium with low-grade narcolepsy and a penchant for buggery,” explains Dr. Evil. “My mother was a 15-year-old French prostitute named Chloe with webbed feet.” His father would make “outrageous claims like he invented the question mark. Sometimes he would accuse chestnuts of being lazy—the sort of general malaise that only the genius possess and the insane lament.” Probably one of the funniest monologues delivered by a sociopath in the history of cinema.

Charlie Chaplin as Hynkel, dictator of Tomania in “The Great Dictator”
If it weren’t for its genuine delivery, Charlie Chaplin’s monologue in “The Dictator” is almost over-the-top PSA. “Our knowledge has made us cynical, our cleverness hard and unkind. We think too much and feel too little. More than machinery, we need humanity.” However, even 74 years later, the principals of what’s said still apply, especially in the realms of technological advances. The 1940 film was nominated for five Oscars, including a nomination for Chaplin in the best leading actor category. The anti-fascist comedy-drama fires direct shots at the Nazi regime and was Chaplin’s first true “talkie,” gaining him wide commercial recognition.

Hugo Weaving as V in “V for Vendetta”
For those among us who relish the beauty of language, talk about making an entrance! This “humble vaudevillian veteran’s” alliteration is admirably arresting (see what I did there?) If you didn’t love to hate Hugo Weaving in his role as Agent Smith in “The Matrix” movies, you’ll just plain love him after listening to his effortless delivery of this tongue-tying monologue. There’s no way to forget the fifth of November after a performance like this one.

Speaking of Hugo Weaving monologues, his comparison of humans to a virus in the “The Matrix” definitely deserves an admirable mention.

Rutger Hauer as Roy Batty in “Bladerunner”
This is one of those monologues that has the power to transport you in your mind, to a place grander than anything that could’ve been put on screen. Even more impressive is its origination from the actor himself. So full of deliberate and paced despair about his last moments of life, with Batty’s death “all those memories will be lost, like tears in the rain.”

Heath Ledger as The Joker in “The Dark Knight”
While his first monologue in the film explaining how he got his scars contains his signature line, “Why so serious?” it’s the second time he explains—with a knife held to Maggie Gyllenhaal’s face and a different version of the story—that really gets us. The Joker seems almost genuine, vulnerable, even. Like he’s dropped his act and is opening up to Gyllenhaal’s Rachel. Ledger is even more creepy in this light, periodically flicking his tongue over his bottom lip. Add in a frenzying build of the music and the spinning camera, Ledger has his audience—both on and off screen—in the palm of his hand. His performance earned him a posthumous Oscar.

Briana Rodriguez
Briana is the Editor-in-Chief at Backstage. She oversees editorial operations and covers all things film and television. She's interested in stories about the creative process as experienced by women, people of color, and other marginalized communities. You can find her on Twitter @brirodriguez and on Instagram @thebrianarodriguez
END_OF_DOCUMENT_TOKEN_TO_BE_REPLACED