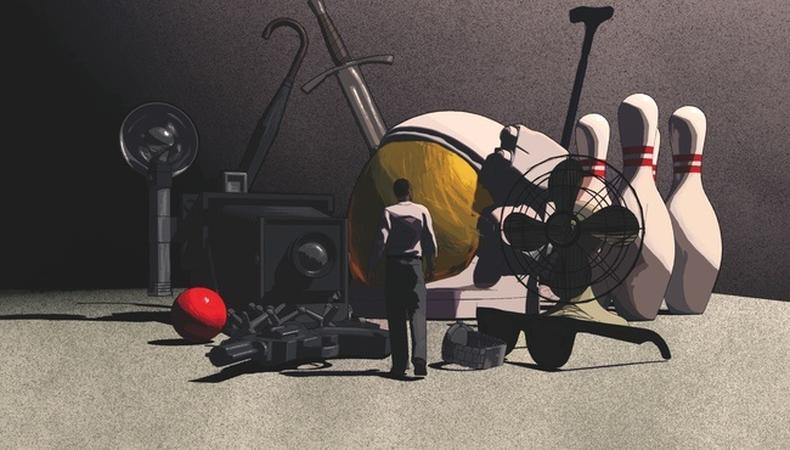 The synagogue asked if I could step in as an usher for the Saturday morning service. I said yes. It feels good to help out. You get to wear your nice clothes. And it becomes an act of courage if you do it without Purell.

I was talking to the woman who was “greeting” with me. She told me a story from her childhood. It’s a story I haven’t been able to shake. It applies to all aspects of life. I think it has a special meaning for actors.

When she was little, her family lived in the North Hills of the San Fernando Valley. They have a microclimate there. Instead of summer, winter, spring, and fall, they have fire season and flood season. Her home was constantly threatened. The fire department used to make regular visits to order them to evacuate. Her family had to be out of the area within the hour.

At first she was terrified. They had a family meeting as to what they would save from the fire. Four people. One car. They began the mathematical calculation of loss—and salvation. As fire season turned into flood season and back to fire season again, the process became simpler. With each evacuation she took less and less. In the end, she only took a change of clothes and the Sears sewing machine she bought with her bat mitzvah money when she was 13. She said she took the sewing machine because “it was the only thing that was really mine.”

As actors we regularly work with props. On the sets of television shows we are shown briefcases, watches, and rings for our characters to wear. I confess I never gave my choices much thought. Now I have to wonder, What is my past with this object? Is this something I would save from the fire?
It’s easy when it is written into the script. In “Three Sisters,” Doctor Chebutykin breaks a clock. As he looks at the pieces he mourns his broken existence. In “The Merchant of Venice,” Shylock learns that his daughter Jessica has run away from home. For money, she has taken a ring that was given to him by his now-departed wife. He hears she used the money to buy—a monkey. He is devastated and says, “It was my turquoise; I had it of Leah when I was a bachelor: I would not have given it for a wilderness of monkeys.”

Our relationship to things can be as powerful as our relationship to people. Usually our personal history with our props is not written into the script. We have to do the work ourselves. As actors we should always imagine: Where did I get this? Did I buy it on impulse, or was it a gift from my father? Is it one of the things I would leave behind, or is it the sewing machine I saved from the fire.