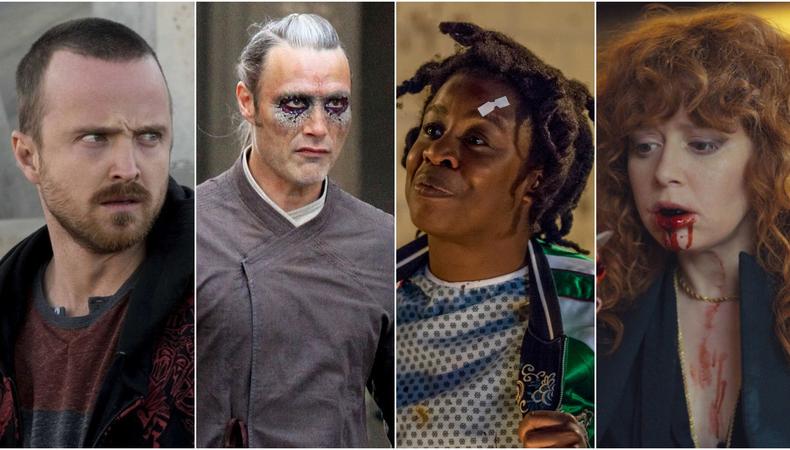 For every hero, there is the archnemisis. And for many actors, playing the baddie can actually be more rewarding than the starring role. Portraying a story’s antagonist can challenge performers to explore motivations, experiences, and reactions that they would never have in their real life. And the best part? At the end of the day, you can take the character off like a second skin and leave it on set. In fact, playing villains can become so addictive, some actors make a career of it. Here are eight top-tier talent discussing playing a monster or menace on-screen, including the joys and pitfalls of portraying the truly despicable.

Aaron Paul, “Breaking Bad”
“As an actor, it’s just so much fun to go to work and zip on that skin and do something that is so polar opposite to your day-to-day life. It’s adrenaline, right? I mean, people jump out of planes to feel that rush. I love feeling heavy emotions, and I love that I can do that at work and have it not be real. But it feels real.”

Mark Strong, “Shazam!”
“There’s an honourable tradition of British actors who’ve gone to Hollywood playing baddies. Part of that is because we grow up with ‘Richard III’ and ‘Macbeth’ – we’re not afraid of our villains. Whereas in the US the hero is revered much more. So when it came my way I just embraced it and enjoyed it. They’re great parts. You get to have fun with them. Because everybody knows you’re not really like that. So there’s that cathartic element: you can be as bad as you like and it’s not going to hurt anybody.”

Uzo Aduba, “Orange Is the New Black”
“There are things being asked of Suzanne in terms of the story that I feel like, ‘No! I don’t know if I want her to do that!’ I was trying to keep her this certain way and then you realize, You know what? Sometimes, like children, you gotta let ’em go.... Once you know what your audience likes and loves, as an actor of course you want to tailor that and work toward that.... The audience might not be used to it, but what’s more important is staying true to what she is, more than what I want her to be or what the public wants her to be.”

Kyle MacLachlan, “Twin Peaks: The Return”
“What happens when I start to work on a role is it gets into my body and I transform somehow... My thought process is different and rhythms become different.... It was really a mix of having the outside parts of the character, of Mr. C, let’s say, the dark colors and the hair and the look and the face and all that. I would watch as the transformation would take place in the makeup chair and the wardrobe and that would just put me in that state that he needed to be in.... Rarely would I have gotten a chance to play the kind of darkness that was in Mr. C. Those roles usually go to other actors.... I don’t know whether I would have been capable of doing that 10 years ago. I think things come when you’re ready.”

Natasha Lyonne, “Russian Doll”
“The things that we really respond to are born on the backs of darkness more than on the wings of victory.... [I was having] lean times where I just couldn’t get arrested, listening to Nick Cave on the subway feeling hopeless, going home at night and there’s nothing to eat but a pack of cigarettes.... All that stuff ended up being sort of the music, in a way, of what ‘Russian Doll’ would sound like. I’d constantly been cataloging this inner monologue of experience that I was walking through the city streets with, and that would ultimately become Nadia’s voice.”

Mads Mikkelsen, “Doctor Strange”
“I like when the villain has a purpose or at least they have a point.... We hate them in reality, we don’t want to see them, but there is a fascination. I’ve said (before) that five minutes after we invented God, we invented Satan. Man is driven by both sides, we’re very curious what’s on the dark side, maybe because it’s part of us and we really want to try and understand what it is.”

Joseph Gatt, “Dumbo”
“I had to play a character once where I was a horrible racist.... And it was very, very difficult for me to do. To the point where I almost turned down the role because I thought, ‘I don’t know if I can do this.’ You just find the thing about the character that you can relate to. Anything. And as long as you can find something you like about the character, something you can relate to, even if some things go way off into some weird place, then you can connect. And you can use substitutions, you do the actor thing where you turn the racism into some other kind of hate or dislike. But it can be very difficult sometimes....I’m kind of a silly person, I work out, I love my girlfriend and I love animals. I’m doing all these fun things. And then I play all these evil, nasty villains onscreen and I love showing people that diversity, that difference….But I do get a lot of shouting across the street, especially in L.A. ‘Oh, why you’d do that? You tried to kill Thor!’ ”