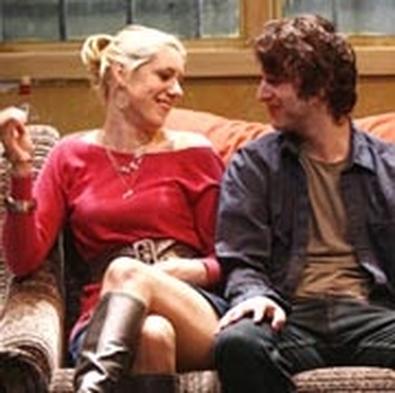 If you stripped away the glamour from the movie Fatal Attraction and replaced it with grimy hopelessness and a healthy dose of testosterone, you might end up with something like Simon Farquhar's unsettling but never satisfying Rainbow Kiss.

The play is set in a tiny project apartment (an appropriately seedy interior from set designer Thomas Lynch) in Aberdeen, Scotland, belonging to Keith (unevenly played by Peter Scanavino), a university-educated single father from a middle-class suburban background whose wife has been institutionalized. The action begins as Keith stumbles home drunk and very much in lust with Shazza (imbued with shrewdness and pizzazz by Charlotte Parry). She's a beautician with a raging libido and a tendency to tease, and though Keith, it's pretty clear, wants to make this tryst something more like a date, Shazza is just looking for some quick kinky sex.

Their contradictory desires prove to have tragic consequences in this exploration of desperation among Aberdeen's lower middle class of all ages. For example, Keith's neighbor (played with sad and creepy comic flair by Robert Hogan), a retired railway man, spends his golden years attempting suicide and trying to save enough for a hooker with whom he can celebrate Christmas. It's a bleak world that should sadden. Unfortunately, Farquhar's play often just strains audiences' credibility, and his desire to shock is too heavy-handed: A loan shark (Michael Cates) appears on the scene to brutalize Keith for an overdue payment on a loan that's never explained. Additionally, though Keith's desire to have some sort of adult relationship is understandable, his rapid descent into obsession over Shazza never rings true.

The characters' financial and emotional plights are made all the more pitiable by their surprising and haunting eloquence, but it's almost possible to miss this in director Will Frears' supercharged production that's a lot like Shazza: an emotional tease.