Sandra Bullock Defies ‘Gravity’ (and What She Knew About Acting) 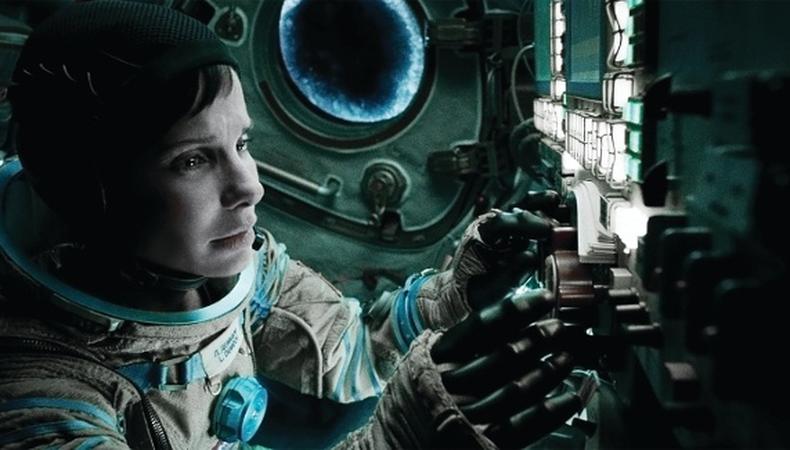 You say you don’t need any dance training because you just want to act? Sandra Bullock wants you to rethink your stance. As the reluctant astronaut Dr. Ryan Stone, Bullock re-created zero gravity while embodying an emotionally complex woman grappling with the death of her daughter and her own possible impending doom. And she owes it all to her early dance training.

“My parents told me, ‘You have to be a triple threat,’ ” she says. And though she claims she’ll never be a singer (though surely at this point we’ve all learned to not underestimate Sandra Bullock?), it was her love of dance that enabled her to execute the precise physical vocabulary required for Alfonso Cuarón’s visuals. “From the neck down, I got to do all those things I wanted to do when I wanted to be a dancer,” she says from her farm in Austin. “But then you had to repeat that all the time, and then you had to be completely organic and spontaneous and make sure you’re connected to your inner life!” Every take was a complex dance between nailing the choreography and crafting an emotional arc. Muscle memory helped with the physicality, but then, as Bullock puts it, there’s always the panic just after “Action!” is called, that moment you think, “What if I’m dry?”

Of course, as audiences know, if Bullock ever went dry she quickly rallied for the next take. Her performance looks so effortless and seamless that listening to her talk about the physical and emotional discomforts on the set can come as a shock. Turns out that floating in space is a lot of backbreaking work. But Bullock is quick to correct any false impressions she might be giving.

“As much complaining as I sound like I’m doing, it was actually the greatest environment to do this movie in because it had to do with isolation and loneliness,” she says. “Had the environment been cushy and soft and fun, I don’t think I would have gotten half the feeling. You realize how much we take for granted just being able to get up and stretch. And you realize how much garbage is in your head when you’re locked in a dark box for 12 hours. But it was an opportunity of a lifetime to figure out what I was capable of.”

When told that the filming process sounds like a combination of therapy and the most grueling acting exercise imaginable, Bullock laughs and agrees. “Not that I ever want to do it again, but I always want to do it again,” she says, before going on to say that the film taught her to strip things back down to the basics. “We’re so concerned about talking, talking, talking to get the character across, and this was the exact opposite. It challenged everything that you know and made you feel like a failure every day because you had nothing to look back on. You literally left work every day feeling like you had failed the whole mission. You have to let go and be part of the process.”

But even at the expense of the giant machine she was standing in the middle of, Bullock learned to stiffen her spine when it came to fighting for her performance. “You have the pressures of knowing the technology was in the forefront, so to stop it midstream was huge,” she says. “But if it doesn’t feel right, stop. And I was stopping a whole machine. You have no idea what you’re capable of until you’re put in a situation where you have no choice and you have to dig into yourself.”