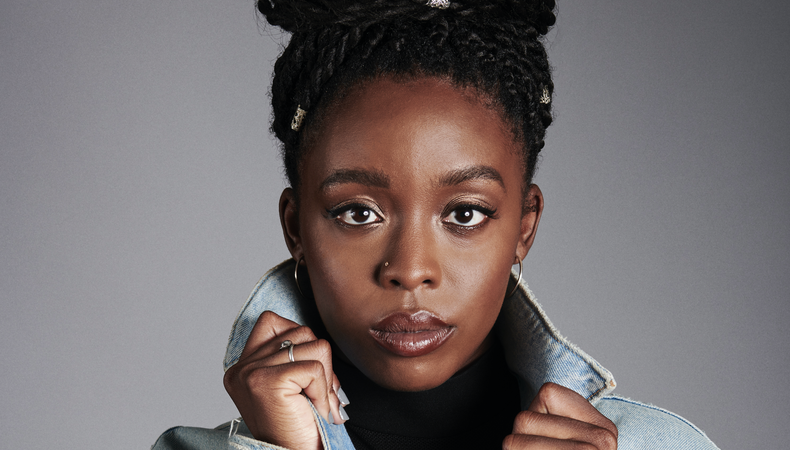 The following Career Dispatches essay was written by Amarah-Jae St Aubyn. Her lead role in Lovers Rock, from Steve McQueen’s lauded BBC anthology series Small Axe, might be her TV debut, but it’s one that’s already created significant waves, from anointing St Aubyn a 2020 Screen International Star of Tomorrow, to five-star reviews in the Guardian and the Telegraph – which noted she “holds the screen like a seasoned star.” St Aubyn’s arrival to acting’s front line has been hard-earned, which makes it even more gratifying that she ends 2020 emphatically on the industry’s radar. She reflects for us here on her journey into acting and the insights she’s picked up along the way.

Getting out of my own way
My parents used to take me to Woolworths every weekend to buy a DVD. It wasn’t long before I had a massive collection – stacks of DVDs and box sets. I used to stare at them proudly and tell myself that one day I’d be on someone’s shelf. One day I would inspire someone. I felt as if I knew this was my calling, but I was very unaware of the journey I was going to take or the discoveries I would make about myself. One of my toughest discoveries would be learning how to get out of my own way.

I used to go to an after-school drama club once a week. One evening, we were asked to take ourselves out of our comfort zone. We were asked to scream, shout, and pull weird faces. Everyone got so into it and was fully committed, except me. I was so self-conscious and worried about looking stupid. However, on my way home I felt way more annoyed that I hadn’t tried, and I told myself I didn’t want that feeling again.

My two other discoveries would be patience and perseverance. The BRIT School was where I became more imaginative and had some truly magical moments, both on and off stage. I had set my goals for afterwards: I would get an agent, attend drama school, and then get my first acting job. When this didn’t go to plan, I was crushed. I thought: “Well, what now?”

After a difficult year on an acting foundation course and telling myself I’m done (ha!), I attempted to erase acting from my mind. It’s crazy when I look back, because now I know that things went the way they were meant to.

At one point among this madness of a story, I auditioned for National Youth Theatre (NYT) Rep company and hadn’t got in. However, a couple of years later, when I spotted their auditions were open, I knew immediately that I wanted to apply. I don’t know what took over me, but I was so completely driven, determined, and focused during those weeks of auditions. When I found out that I got in, I was over the moon. I leaped for joy all day until the evening when I spoke to a friend. We both cried tears of happiness for a good 15 minutes on the phone together. I realised that, during those auditions, I was entirely out of my own way for the first time. I had trusted myself, and that alone was an accomplishment.

National Youth Theatre Rep
National Youth Theatre Rep is described as a nine-month intense training course (and intense it definitely was!) but this was what switched the game for me. This was where I finally became closer to an industry that once seemed so out of my reach. However, while striving for success on this course, I wasn’t looking after myself and my mind. The self-love wasn’t there and the discipline I had during the auditions started to drop.

This carried on into my time on Harry Potter and the Cursed Child. The NYT Rep course had prepared me for the intensity of Harry Potter but again, I struggled to find the balance between doing the work and looking after myself. A few months before the end of the contract, I badly injured my ankle. I was devastated as it meant that I was no longer able to do the show.

Getting cast by Steve McQueen
Around this time, I was called in for a general meeting. This was for a BBC project to be directed by Steve McQueen. I remember seeing a massive pile of acting CVs on the table and the casting assistant not being able to give too much away, so we just kind of had a chat. I hadn’t had many general meetings, so I limped home not really knowing what the meeting was for. A few months later, I was at a table-read audition with Steve McQueen, and a few months after that I was being directed by him. I was the lead in Lovers Rock, one of his five films in the anthology series, Small Axe.

Now here I am in 2020, doing publicity for Small Axe, an anthology series that will go down in history. Alongside this, I’m working at a bar and restaurant with really cool people and still making time for self-tape auditions. The urgency to work on myself, mentally, has never been more important. Especially in an industry where you could work for two months and then be out of work for a year or more. Because of this, I’ve learned that a strong sense of self and a life outside of acting is the foundation needed to stand strong in this industry.

I’m aware I’ve spoken a lot more on the hardships than the successes. However, when I was in my darkest of places, I found strength in reading how my role models had struggled and still continue to overcome their own obstacles and their “I’m done with this” moments. Looking back on my journey, that’s only really beginning, it’s the obstacles and challenges that have made the victories, even the little ones, that much sweeter.

Lovers Rock, part of Small Axe, is coming to BBC One and iPlayer on Sunday 22nd November.