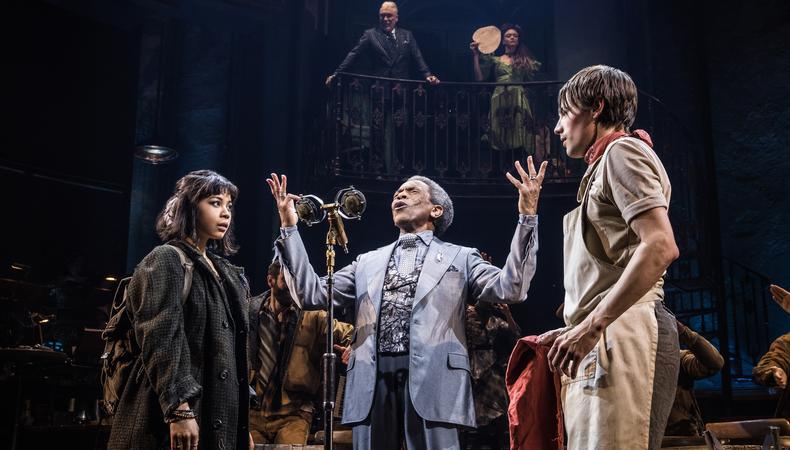 The best of Broadway came together to celebrate the magic of live theater—and introduce TV watchers everywhere to that same magic—at the 2019 Tony Awards. Hosted by James Corden June 9 at New York’s Radio City Music Hall and broadcasted on CBS, the 73rd annual ceremony named after Antoinette Perry anointed many hardworking Broadway veterans and a few new voices who will likely be returning to the Tonys stage for years to come.

The night’s big winner was Anaïs Mitchell and Rachel Chavkin’s “Hadestown,” an original musical based on the ancient Greek myths of Orpheus, Eurydice, Hades, and Persephone. The show won a total of eight Tonys, including Best New Musical, for Mitchell’s score, Chavkin’s direction, and featured actor André de Shields.

Picking up the first Tony of his long career as Hermes in “Hadestown,” de Shields espoused advice in his acceptance speech. “Slowly is the fastest way to get to where you want to be,” he said. “The top of one mountain is the bottom of the next so keep climbing.” Later backstage, he elaborated: “There are so many other adventures I want to have, so many more mountains I want to climb. Keep climbing.”

Stephanie J. Block of “The Cher Show” and Santino Fontana of “Tootsie” took home the leading musical trophies. Ali Stroker became the first disabled actor to ever win a Tony Award for her work as Ado Annie in “Oklahoma!” which also took home the prize for best musical revival.

“This award is for every kid who is watching tonight who has a disability or a limitation...who has been waiting to see themselves represented in this arena,” said Stroker. “You are.” Later in the press room, Stroker pointed out that, while many New York theaters are wheelchair-accessible, backstage areas often are not. She went on to say, “I’ve heard from a lot of young, inspiring performers, actors, singers, musicians, about how exciting it is to see someone in a chair on Broadway and on television...how it motivates them and inspires them to keep going.”

Performances from nominated shows, including other new musical nominees “Ain’t Too Proud - The Life and Times of The Temptations,” “Tootsie,” “Beetlejuice,” and “The Prom,” livened up the ceremony, which also included brief presentations from Best New Play nominees Taylor Mac of “Gary,” Heidi Schreck of “What the Constitution Means to Me,” James Graham of “Ink,” Tarell Alvin McCraney for “Choir Boy,” and Jez Butterworth of “The Ferryman,” which took home four awards, including the best new play prize.

Winning in the play acting categories were Celia Keenan-Bolger for “To Kill a Mockingbird,” Bertie Carvel for “Ink,” Bryan Cranston for “Network,” and Elaine May for “The Waverly Gallery.” Winning the award for best play revival was Mart Crowley’s “The Boys in the Band.”

LISTEN: Celia Keenan-Bolger on How Actors Can Change the World

Two-time Tony winner Judith Light accepted the special Isabelle Stevenson Award for her extensive humanitarian work. In her speech she spoke of the people and artists affected by HIV and AIDS, and quoted George Bernard Shaw: “ ‘I want to be thoroughly used up when I die, for the harder I work, the more I live. I rejoice in life for its own sake. Life is no brief candle to me. It is sort of a splendid torch which I have a hold of for the moment, and I want to make it burn as brightly as possible before handing it over to future generations.’ To those of you who are our future generations, please remember you are our legacy. There is nothing to get in this life, just give.”

Rosemary Harris, Harold Wheeler, and Terence McNally were also among this year’s special Lifetime Achievement honorees. “No one does it alone, least of all playwrights,” McNally said from the stage. “Most of all this one.”

Jack Smart
Jack Smart is the awards editor at Backstage, where he covers all things Emmy, SAG, Oscar, and Tony Awards. He also produces and hosts Backstage’s awards podcast “In the Envelope” and has interviewed some of the biggest stars of stage and screen.
END_OF_DOCUMENT_TOKEN_TO_BE_REPLACED