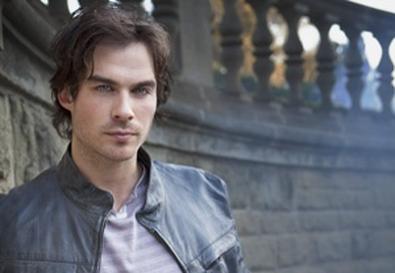 In prepping to audition for "The Vampire Diaries," Ian Somerhalder employed an unusual approach. "I found out about the meeting at 9 o'clock the night before, and I was in Vegas, a five-hour drive away from L.A.," he recalls. "I taped my sides together in the car and drove across the desert in the morning. That's how I worked on my script."

While this may not be the method most recommended by in-the-know acting coaches, it appears to have worked: Somerhalder nabbed the role of nefarious Damon Salvatore, a devilish bloodsucker who spends most of his time tormenting his younger, more earnest sibling (Paul Wesley). Somerhalder brings a wicked sense of fun to the role; with his well-timed smirks and smooth line delivery, he steals nearly every scene he's in. In a way, he makes it all too easy to root for the bad guy.

"Damon is, by societal standards, bordering on the level of a sociopath," says Somerhalder with a chuckle. "But here's an interesting thing: My coach, Ivana Chubbuck, one phrase that she coined about Damon is that Damon has ill intentions but for righteous reasons. People like that are beyond dangerous. On a positive note, what makes that really fun is he truly believes in what he's doing and he loves it."

After reeling in a decent chunk of viewers with its moody early episodes, "The Vampire Diaries" was picked up by the CW for a full season. For Somerhalder, this lessens the sting of failing to book a part on that other vampire show, HBO's runaway hit "True Blood." The actor auditioned for the role of troublemaking Jason (which eventually went to Ryan Kwanten), but it didn't go so well.

"I wanted it so badly, and I blew my audition with [show creator] Alan Ball," Somerhalder says bluntly. "I had rehearsed this stuff so many times and it worked. And then I got in the room and I just blew it. I was bummed about that, and to be honest with you I couldn't watch 'True Blood' until I booked 'The Vampire Diaries.' " He chuckles bemusedly. "Then I realized, 'Wait a minute. I have my own vampire thing now.' "

Growing up in Louisiana, Somerhalder was interested in the world of performing from a very young age. He did theater as a kid and eventually started to book work as a model. At 16 he moved to New York to model full time. Bouncing back and forth between Europe and the U.S., he learned a lot while posing for magazine spreads and fashion pictorials of every stripe. "That really helped with understanding cameras and being fearless in front of a camera," he says.

But after a few years, Somerhalder realized that the time and energy devoted to his modeling career was holding him back from his first love: acting. "Every time I would start to study acting, I would always book another job in Milan or Paris," he remembers. "I was trying very hard to focus on acting, but I had to pay bills. I realized I couldn't do it halfway. So I had to just work for a while, save up money, and say, 'Okay, I can sustain myself on this; I can just focus on the work.' I'm thankful that I had the gall to do that. It was definitely not the easiest thing I'd ever done, but it was the most rewarding."

Somerhalder began studying with acting teacher William Esper, who helped solidify his ideas about committing fully to the craft. "Bill Esper would get very angry with people sometimes when they just wouldn't commit to what they were doing," the actor says. "They wouldn't live truthfully in whatever moment was on the page. He would scream at the top of his lungs, not out of being mean but out of frustration and love: 'You have to do, or you die trying.' "

Somerhalder eventually started booking roles on teen-centric TV series like "Young Americans" and bit parts in films such as "Life as a House." A more significant break came in the form of the Roger Avary film "The Rules of Attraction," based on Bret Easton Ellis' pitch-black novel of the same name. Somerhalder was called in to try out for the pivotal part of spoiled rich kid Paul. As with "The Vampire Diaries," the actor got the call when he was nowhere near Los Angeles.

"I was in the Florida Keys, and I get this script in the middle of a rainstorm," he recalls. "I had to drive back to L.A. by myself from Key West. I had that script, and I started reading it while I was on the road. Stopping, reading, working on the material in traffic jams across the country. I didn't sleep from Houston to L.A. I got to L.A. and I was hallucinating." And yet he still nabbed the part; it seems impromptu road trips have a way of working out for him. "Yes," he says, laughing. "I should do that with every audition."

Before "The Vampire Diaries," Somerhalder's most high-profile role was as tormented castaway Boone Carlyle on "Lost." The character was the first major player to be killed off, dying a dramatic death in the show's first season. Somerhalder still remembers exactly where he was when he found out what was in store for poor Boone.

"That was a very intense day for me," the actor says. "Thankfully, I was in wine country in California after many glasses of pinot noir. It didn't necessarily take me by surprise, because every single one of us knew it could happen to us. But it definitely was difficult to leave something like that. It was difficult to leave that show and my friends and that island."

Given that nothing is ever certain in the deliciously weird world of "Lost," Boone has appeared on the show post-death—and will do so again in an upcoming episode of the highly anticipated final season. "I got to go back for literally a minute and shoot some stuff," marvels Somerhalder. "To be back on the set, see all of my old friends—it was a very nostalgic place for me. The work that those guys are doing is phenomenal. To be a part of that on any level is wonderful."

And ultimately, Somerhalder certainly bears no ill will toward the show for offing his character. After all, it opened the door to new opportunities, including "The Vampire Diaries." And it gave him the chance to bring an interesting and multifaceted role to life, even if it was only for a short while.

"It's a very funny thing with this business: We always hear the phrase 'It's not personal,' " he muses. "It's almost an impossibility to distinguish between taking something personally and not taking something personally when it's such an emotional job to begin with. But at the end of the day, I've realized that there are so many factors beyond your control as an actor, and if you show up and you live truthfully every moment that's on the page, and you can weave the thread of life into the text that's on the page, then that's all you can do—you did your job."


Outtakes
- Upcoming projects include the twisty thriller "Cradlewood"
- Repped by Craig Shapiro at Innovative artists and Untitled Entertainment's Alissa Vradenburg: "I've known Craig for 13 years and I've been with Alisa for eight. These people become like family."